Angela Marsons brings us another deftly woven story of revenge and destruction in her mesmerising DI Kim Stone series.

Twisted Lies is utterly thrilling and introduces one of her darkest killers yet.

Her stomach lurches as she sits in the windowless room. He throws her phone to the ground, grinds it against the floor with the heel of his shoe and brings his face closer to hers. There was no turning back now, her life as she knew it was gone.

When the lifeless body of a man is found on an industrial estate, Detective Kim Stone arrives on the scene and discovers he’s been tortured in the worst way imaginable.

But as she breaks the devastating news to the victim’s wife, Diane Phipps, Kim can’t help feeling that something isn’t quite right about the woman’s reaction.

Then a second body is found staked to the ground in a local nature reserve.

Desperate to crack the case open quickly, Kim and her team unravel a vital clue – a fiercely guarded secret that links both victims and could cost even more lives.

A secret that some police officers are also protecting.

Faced with deceit from those she should be able to trust, family members who won’t talk, and local reporter, Tracy Frost, opening a can of worms on the case of a woman murdered by her husband a year ago – Kim is in deep water like never before.

Kim must find the motive if she is to find the killer who is systematically targeting and torturing his victims. But can she unlock the shocking truth and stop him before he strikes again?

An absolutely jaw-dropping crime thriller from the number one, multi-million-copy bestselling author of the incredibly addictive Detective Kim Stone series.

Silent Scream, the first book in the series, was the first book I ever wrote a review for on my blog. It signalled the beginning of my blogging hobby which led to my career in the publishing industry. This might sound creepy, but I think about Marsons a lot as if it wasn’t for her creating a team of characters I was immediately seduced by, I wouldn’t have felt the need to shout about them to the world (well, my little corner of the Web were I tell you all about the books I love!)

Detective Inspector Kim Stone is a standout character in a genre full of similar characters. She is head and shoulders above the rest, even without stealing Frost’s killer heels to add a few inches! 😉 (if you know, you know)

Twisted Lies is the perfect title for this one as that is what we get. A plot full of twists and turns that leave you breathless. And not just in terms of the killer.

Tracy Frost is back. Journalist extraordinaire and sometimes help but mainly a hindrance to Kim and the team thanks to her determination to get a front page exclusive. Woody has arranged for her to spend the with Kim, regular readers will know what Kim’s reaction to that bombshell was … What follows is a intense sub-plot that brings their love/hate relationship to the fore and which had me sobbing into my pillow late one night! Frost and Stone been through a lot together and their friendship is one based solely on a very slim mutual respect. They’ve helped each other in the past but Stone will never understand Frost’s need for a headline and Frost will never understand Stone’s need to keep things under wraps. Things change in Twisted Lies and Frost finds herself questioning her approach to her work which leads her down a dangerous path…

This is the reason I love this series. FOURTEEN books in I’m so attached to the characters, even the ones who ‘only’ make occasional appearances, that I end up in tears when things go right, or wrong. for them! It truly is a testament ot Marsons’ writing skills that I’m still affected in this way, and I love it!

One thing I do love about Kim is that although she has changed and been on one of the best character development arcs I’ve seen, the changes are authentic and subtle. Marsons has kept her true to herself from the start even though there have many opportunities for her to just make her ‘normal’. I just love it.

I will never tire of this series and Twisted Lies is a deftly woven tale of revenge, obsession, and killer so twisted it took my breath away.

Bookworms, you NEED to read this one! Follow this link for your copy.

Huge thanks to the team at Bookouture for my advanced review copy. This is my honest review!

I bloody LOVED it! 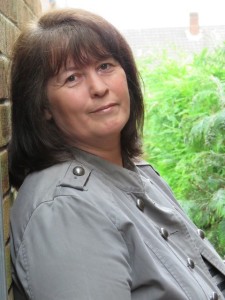 Angela Marsons is the Wall Street Journal and USA Today bestselling author of the DI Kim Stone series and her books have sold more than 4 million in 5 years.

She lives in Worcestershire with her partner and their 2 cheeky Golden Retrievers.

She is signed to Bookouture.com for a total of 28 books in the Kim Stone series and her books have been translated into more than 27 languages.

Many of her books, including Blood Lines, Dead Souls, Broken Bones, Fatal Promise and Dead Memories reached the #1 spot on Amazon on pre-orders alone and the translation of Dead Souls, La Verita Sepolte, recently won the prestigious Primo Bancarella award.