It’s my turn on the blog tour for Linda Huber’s latest novel, Baby Dear, and it feels like I’ve been waiting FOR EVER to share my thoughts with you all!

This is the first of Linda Huber’s books I’ve read but it WILL NOT be the last!

Caro and Jeff Horne seem to have it all until they learn that Jeff is infertile. Caro married Jeff because her biggest wish was to be a mother, and he had the means to give their children a better life than she’d had. Jeff, who is besotted with Caro, is terrified he will lose her now they can’t have a baby.

Across town, Sharon is eight months pregnant and unsure if she really wants to be a mother. Soon her world will collide with Jeff’s. He wants to keep Caro happy and decides that getting a baby is the only way.

Then Caro is accidently drawn into an underworld of drugs …

Meanwhile, Jeff is increasingly desperate to find a baby but what lengths is he prepared to go to?

Is Sharon in danger, and will Caro ever have the family she’s always dreamed of?

Caro has it all, the house, car, job, and a marriage made in heaven. Until she finds out that her husband, Jeff, can’t father children naturally. They both sink into their own feelings over the weekend following the news but instead of allowing them time to get their heads around it, so that they can deal with it all together, those two, silent days, drive a massive wedge between them … A baby sized wedge that is.

Sharon is just about ready to give birth. Although she doesn’t actually want to be a mother … does she? Her husband, Craig, certainly doesn’t want to be a father. Their perfect lives have been turned upside down by the imminent arrival of their baby, gosh even just being pregnant has practically ruined their lives! They would both do anything they could to go back to the way things way before they got pregnant.

Julie is a single mother. Her life is anything but perfect however she has two beautiful children who she adores, and who adore her back, to keep her happy.

This is a brilliantly written, character driven story which Huber spins wonderfully. Intricately weaving a tangled web of love and loyalty, pain and dishonesty, she draws us into the mind-set of each individual person and their current situation and it is utterly absorbing.

With it’s third person narrative and a different characters point of view throughout the chapters, Baby Dear is easy to follow. I find that this method of structuring a book helps to keep the pace and makes those pages turn so much faster.

Huber dives straight in to the action with the prologue and after a few chapters, the fast pace is set and is unrelenting until the very end!

I love Huber’s style of writing, there is a real vulnerability to the characters she has created here and she allows that side of them to show; infertility is not an easy subject to write about but Huber deals with is sensitively. She has clearly done her research and knows what she is talking about.

This is a fantastic book and one that I have been and will continue to recommend to EVERYONE!!!!

Get over to Amazon UK now to get your copy!!!

Be sure to follow the rest of the tour …

My thanks to the author and Bloodhound Books for my advanced readers copy. 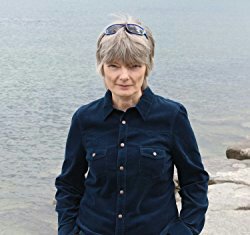 Linda grew up in Glasgow, Scotland, but went to work in Switzerland for a year aged twenty-two, and has lived there ever since. Her day jobs have included working as a physiotherapist in hospitals and schools for handicapped children, and teaching English in a medieval castle. Not to mention several years spent as a full-time mum to two boys, a rescue dog, and a large collection of goldfish and guinea pigs.

After spending large chunks of the current decade moving house, Linda has now settled in a beautiful flat on the banks of Lake Constance in north-east Switzerland, and is working on another suspense novel.