I’m ashamed to say that Killing Pretties is the first book of Ashman’s I’ve read but it will not be the last.

It was thrilling, gruesome, a bit more thrilling, a LOT more gruesome, and twisted and sick and introduced me to two of the most of evil and sadistic killers I’ve read in a fiction book.

And, on top of that, we are introduced to two new officers, DS Malice and DC Pietersen, who I desperately want to see more of in the future.

Now, before I carry on, I have to apologise… I moved house last week and still don’t have broadband in the new house… this review was supposed to go up last week and it didn’t…      Rob, Sarah… I am so so sorry for the mishap 😢 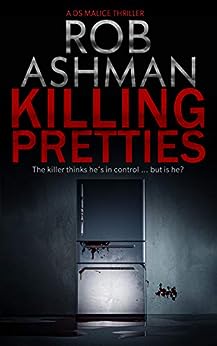 Detective Sergeant Khenan Malice is a rubbish ex-husband, a crap father but a damned good detective. It’s a shame he spoils his only redeeming quality by being a bent copper.

Detective Kelly Pietersen joins the team to help find a missing woman. But Kelly has a secret…

Damien Kaplan is a leading criminal barrister and a keen amateur potter. He also happens to be a serial killer with a chilling approach to creating his art. He’s married to Elsa, though she considers him more of a possession than a husband. She controls those around her using sex and procures men and women for her husband to play with but only after she’s finished with them first.

Killing Pretties is his passion, having sex with them is hers. It is difficult to say which one is worse.

The missing woman brings all four crashing together – an incendiary mix that doesn’t end well.

Killing Pretties is one of the best serial killer thrillers I’ve read for a VERY long time, and trust me, I’ve read a LOT!

Ashman is an author who’s books I’ve had sat on my TBRP for about six thousand years (I know, I know…) so as soon as I got offered a space on the blog tour for this new one I jumped at it. And boy am I glad I did!

Seriously… I can’t stop recommending this to everyone who asks for a book to read at the moment. It is BRILLIANT!

So, bent copper, DS Khenan Malice, is a very lovable character. His ex-wife hates him, his daughter adores him, and the local scumbags put up with him for the information he sells. He doesn’t sound like the sort of person we, as law abiding citizens, should like, but trust me… you will! He’s a lovable rogue, except he isn’t a rogue, he’s a cop! Think Luther but with his foot fully over the line into being bent and not just balancing on it.

While Malice is trying to control the drug dealers in his life, he is assigned to a missing person case, and is ‘given’ a new partner to work with. This isn’t ideal given he spends a lot of his shifts trying to juggle his dealers and his ex and his daughter…

As they investigate the missing woman, they have no idea how murky things are about to get.

What follows is a sensational game of cat and mouse… but who is chasing who?

I adored Ashman’s writing. He has a remarkable way of pulling you into the scenes, of creating a real world that you just fall into, and a sublime skill at developing characters which will stay with you for a very long time. I loved how, although so far out there the plot is, it isn’t so far out there it couldn’t happen. And the ability to write like that is a skill I admire in an author… Ashman has this in spades!

I will forever remember this one forever. Trust me, you absolutely need to read Killing Pretties. It has everything you want from a crime thriller, and then some. And then some more!

I screamed, I jumped, I had to turn the bedside lamp on while reading… and I had to snuggle up a bit closer to the hubby when reading this… it’s a blood-tingling thrill fest and I cannot wait for the next one!

Hugest of thanks to Sarah at Book on the Bright Side Publicity for inviting me on to the tour. Make sure you keep up with the other stops on the tour:

Now go and buy your copy! 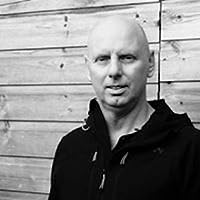 Rob is married to Karen with two grown up daughters. He is originally from South Wales and after moving around with work settled in North Lincolnshire.

Like all good welsh valley boys Rob worked for the National Coal Board after leaving school at sixteen and went to University at the tender age of twenty-three when the pit closures began to bite. Since then he’s worked in a variety of manufacturing and consulting roles both in the UK and abroad.

It took Rob twenty-four years to write his first book. He only became serious about writing it when his dad got cancer. It was an aggressive illness and Rob gave up work for three months to look after him and his mum. Writing Those That Remain became his coping mechanism. After he wrote the book his family encouraged him to continue, so not being one for half measures, Rob got himself made redundant, went self-employed so he could devote more time to writing and four years later the Mechanic Trilogy was the result.

Rob published Those That Remain, In Your Name and Pay the Penance with Bloodhound Books and has since written the DI Rosalind Kray series. These are Faceless, This Little Piggy, Suspended Retribution and Jaded which are also published by Bloodhound.

His latest work sees the introduction of a new set of characters – DS Khenan Malice and DC Kelly Pietersen. The first book in the series is titled Killing Pretties and the second is Twinkle, Twinkle, Little Lies. Both books will be published this year.

When he is not writing, Rob is a frustrated chef with a liking for beer and prosecco, and is known for occasional outbreaks of dancing.

2 thoughts on “#KillingPretties by Rob Ashman is beyond electrifying… it’s a blood-tingling thrill-fest and you MUST read it! Here’s my #blogtour #review @BOTBSPublicity @RobAshmanAuthor”