I am so excited to be on the tour for Liz Mistry’s latest novel, Uncoiled Lies today.

Uncoiled Lies: a stunning crime thriller from a best-selling author

Murder. Love. Corruption. DI Angus McGuire and the team are back and have their work cut out.

Murdered prostitutes and a turf war between local gangsters takes the investigation into Bradford’s Immigrant communities where tensions run high.

To make matters worse McGuire is juggling an illicit relationship with his boss’s daughter and has fraught family relations.

Who is The Old Man?

What is the link between three dead prostitutes and a long forgotten murder?

Will McGuire and his team get the answers they want or is the uncomfortable truth much closer to home?

Sound good? Of course it does! Get yourself over to Amazon UK now to get your copy!!

And to really whet your appetite, here’s an extract . . .

Anastazy as he watched the bus stop further down the road on the opposite side. He drew

deeply on his cigarette before flicking it onto the pavement, narrowly missing a Pakistani woman

with a pushchair who was dragging her school-age child behind her. She turned and opened her

mouth as if to say something to him but stopped when he stepped towards her, his large body

its tear drop inks, past his snake tattoo to his muscled upper arms, bulging from the sleeves of

his T-shirt. Her fear made his groin twitch. He flexed his muscles and his tattoos coiled and

trembled up his arms. ‘What, Bitch?’ he said, enjoying the power. The woman’s face blanched, so he stamped his foot into a puddle, sending splashes of rain onto her shalwar and laughed as she scurried off, urging the child forward and steering the pushchair with one hand. Turning to the group of mums who had witnessed the incident and were now giving him a wide berth, he

bowed, his gesture slow and flamboyant, before stepping back into the doorway and lighting

another fag. He loved commanding respect and he enjoyed seeing other people’s fear. Mind you,

he needed to keep a bit of a rein on his natural instinct to dominate. No point in drawing too

many people’s attention to him. Not when The Old Man had told him to keep a low profile. He

didn’t want to piss him off too much.

road towards the bus stop. As usual, she was with her younger brother who towered above her,

his limbs all edges and angles as he loped along. To avoid her noticing him, Anastazy took a step

backwards into the doorway and continued his secret scrutiny. She seemed more aware of her

surroundings than usual. Her eyes darted around her as if she was looking for someone.

Anastazy grinned. He knew he’d scared her the previous night and that she was looking for him.

Good. Sometimes it was better to keep them on edge. Keep them off kilter.

She wore a hoodie today and he suspected that the hood was up, not only to keep off the

rain but as a disguise. She clearly didn’t know that he’d been watching her for days and knew

exactly where she lived, the places she went and who she hung around with.

Manchester Road to City Academy. He’d followed her before. He drew on his cigarette and

frowned. When she was his, she’d be giving that crap up. No way would he let her continue

going to school. Not when she could be earning for him. Not as if she’d need A Levels doing

what he had in mind for her. A paroxysm of coughing racked him for a second. He hoiked up a

glob of phlegm and, using his tongue to direct it, blew it from his mouth in an arc, laughing

when it landed on the back of a kid in a poxy blue uniform. The kid didn’t notice the green slime

dribble down his back, which amused Anastazy even more. 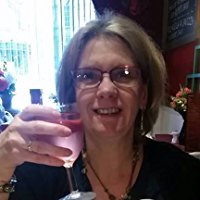 I am a crime writer based in Bradford but originally from West Calder in Scotland. I studied at Stirling University and taught in Bradford inner-city Primary schools for many years. I write gritty crime fiction drawing on the richness of Bradford’s diverse cultures and my writing is heavily influenced by Tartan Noir writers such as, Stuart MacBride, Ian Rankin and Val McDermid. I completed an MA in Creative Writing at the brilliant Leeds Trinity University. I currently have two novels published: Unquiet Souls (my debut novel) and Uncoiled Lies and I look forward to writing many more featuring my main character DI Gus (Angus) McGuire and his team. I am co-founder and lead blogger with The Crime Warp Blog