Well, I can’t quite remember the last time I saw such a massive build up and subsequent hype surrounding a debut novel.

Daniel Coles’ Ragdoll was released last week and my gosh what a reception it has received! 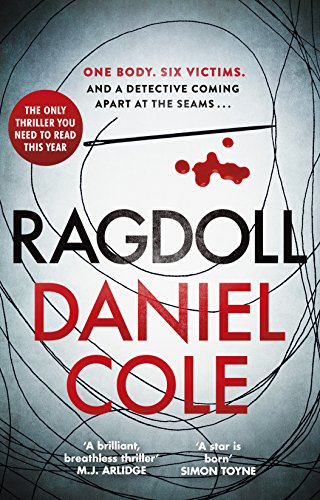 A body is discovered with the dismembered parts of six victims stitched together, nicknamed by the press as the ‘Ragdoll’. Assigned to the shocking case are Detective William ‘Wolf’ Fawkes, recently reinstated to the London Met, and his former partner Detective Emily Baxter.

The ‘Ragdoll Killer’ taunts the police by releasing a list of names to the media, and the dates on which he intends to murder them. With six people to save, can Fawkes and Baxter catch a killer when the world is watching their every move?

Daniel Cole you are one talented man!!!

Is this seriously your debut? Honestly???

Ragdoll starts like a seemingly routine courtroom drama but it quickly becomes clear that it is anything but!

I am fairly certain that this concept has not been done before, one ‘body’ which is actually made up with the limbs of six people?!? I mean, come on . . .  I bet Stephen King is well annoyed he didn’t think of this one!!! What a genius concept and so utterly clever of Cole to bring something completely fresh to the table in a genre that is saturated with reworking of the same plot lines (not that there is anything wrong with that mind!!)

Ragdoll is totally addictive, you will need to plan a take away, call in sick and get a babysitter before you start reading this because you will devour it in one day given the chance.

It is also the kind of book you don’t actually want to finish because it so superbly written and the storyline is that enthralling you want it to carry on and never end.

The whole book has been brilliantly planned and plotted, from the characters to the darkly delicious humour, the chapter headings to the relationships between the characters and this shines through.

A thrilling ride that will have you glued from the first page to the last.

At 33 years old, Daniel Cole has worked as a paramedic, an RSPCA officer and most recently for the RNLI, driven by an intrinsic need to save people or perhaps just a guilty conscience about the number of characters he kills off in his writing.

He currently lives in sunny Bournemouth and can usually be found down the beach when he ought to be writing book two instead.