I’m over the moon to welcome Russel McLean to #ETLBW today to shine the spotlight on his character, Jen Carter from his latest novel, Ed’s Dead.

Hello, Russel, thank you so much for taking the time to talk with me today, now, before we start, can you please introduce the character in terms of job, relationships, family etc. …

I don’t think there’s any question that Jen Carter is the focus of Ed’s Dead. She’s a Glasgow bookseller, in her 30s, and at the beginning of the book, she’s a little lost in life. She’s unfulfilled, mostly because she’s never really quite followed her dream – she wanted to be a writer, but never really pursued this properly. Even her relationships seem half-hearted. Her boyfriend, Ed, is a serial cheater, part time drug dealer, and yet somehow superficially charming enough that she keeps coming back to him. Of course, all that’s about to change, something that might be given away in the title… and for Jen, this means that she’s about to be forced to figure out who she really is …

Jen was created quite specifically for Ed’s Dead, but she had been bouncing around my head for a while. She’s something of a reaction to the “victim” or “dream girl” women characters that can crop up in certain novels. She’s imperfect in a lot of ways and has a very messy personal life. She makes bad decisions, but I think at heart she’s a good person, even if she does end up giving in to the darker sides of her own character.

It’s a hard question to answer. For me, character and story are inseparable. You can’t have one without the other. But I knew I wanted to write about someone who was very normal on the surface, and forced into a very abnormal situation, so maybe in that sense, the character did fit the book.

I like the fact that, when she’s thrown into a situation where she’s not in control, she takes control – even if that’s by accident. She doesn’t quite realise what she’s capable of, but when push comes to shove, she puts her head down and tries to resolve matters. Even if that does mean doing something unpleasant. I think she’s also unafraid (especially by the end) of being a little unlikeable – she starts out as a bit of a people pleaser, but abandons that as the book goes on, which I really like!

That’s a hard question to answer. I loved spending time with Jen. But maybe I still get frustrated that she stuck with Ed so long before dumping him! (If she’d done it earlier, none of this would have happened to her…)

I was really worried writing Jen’s voice – especially in first person narration – because I was aware of how many mistakes male writers can make when writing women. But my attitude was to think of her psychologically more than physically (if that makes sense – basically, I didn’t want her “breasting boobily down the stairs”, to possibly misquote a Twitter meme from a while back), and it seemed to work. One of the big things for me was more how other people reacted to Jen – that really seemed to help, too. Other characters reacted to and judged Jen differently than they did my earlier, male protagonists, and how she felt about that was very important for me to understand.

Both my editors, and my early readers, were women, and seemed to have very few concerns about her even in early drafts. My partner had only one suggestion, which was that Jen not use the word “panties” at one point (being from Glasgow and all!) –  something quickly and easily remedied. I was happy, because I’d put so much work into making Jen feel real and was very worried I’d drop the ball.

Yes and no. There is one part of the story is based closely on something that happened to a friend, and I asked them for permission to dramatise it – but it’s a very small moment. The bookselling part of course parallels the fact that I was a bookseller for ten years, and one anecdote she tells is based on a real encounter I had in a bookshop with a customer! But it’s a small part of the book, and just allowed me to ground Jen in some kind of reality before the insanity begins.

But other than that, there was no intentional parallel with reality – although I guess all characters are, consciously or not, amalgams of people the writer knows.

Jen may return one day. I have plans for her and Kat (from And When I Die) to meet up one day, as this book does reveal that they were friends before Kat disappeared, although you could read either book on its own – it was just a fun little Easter egg for me throw in.

At the very least, I’d have worked with her in bookselling, I think. Yeah, I think I’d get on well with Jen, and I’m pretty sure she wouldn’t kill me, even by accident…

Thanks so much for joining me today, Russel! Jen sounds great … a bookseller who potentially kills people by accident?! What’s ot to love? And of course, I love the sound of the book too … I can’t wait to read it!

I’m sure you guys will too so … 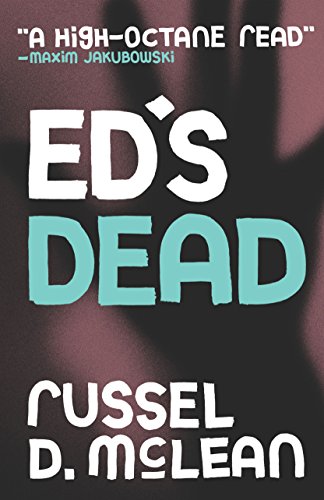 Meet Jen. She works in a bookshop and likes the odd glass of Prosecco… oh, and she’s about to be branded The Most Dangerous Woman in Scotland.

Jen Carter is a failed writer with a rubbish boyfriend, Ed. That is, until she accidentally kills him one night. Now that Ed’s dead, she has to decide what to do with his body, his drugs and a big pile of cash. And, more pressingly, how to escape the hitman who’s been sent to recover Ed’s stash. Soon Jen’s on the run from criminals, corrupt police officers and the prying eyes of the media. Who can she trust? And how can she convince them that the trail of corpses left in her wake are just accidental deaths?

A modern noir that proves, once and for all, the female of the species really is more deadly than the male.

Russel D McLean is an experienced author with six previous novels to his name, five of them in the popular McNee series, published in several countries. He writes a monthly crime fiction column for the Herald in Scotland and works as a scout identifying emerging crime authors. He spent 10 years as a bookseller in Dundee and Glasgow whilst developing his writing and editing.