I am so honoured to be sharing the cover for Neil Lancaster’s latest thriller, Going Back today. The third book in his hugely popular Tom Novak series, Going Back is out on 21 August and it sounds amazing!

The war is over, but some scars never heal…

Answering a call from his old friend and comrade-in-arms, Mike Brogan, Tom Novak finds himself back in the one place he does not want to be, the home of his childhood nightmares: Sarajevo.

Undercover and thrust into the centre of a Black Op, Tom and his team are double-crossed and forced to rely on their wits as a deadly new threat emerges.

Forced into a race against time to stop a terrifyingly effective new weapon, can Tom fight against the odds once more to save not just those he loves, but the world as we know it?

Are you ready to see the cover?

I think it needs a drum roll…

As mentioned, Going Back is out on 21 August and you can pre-order your copy now so it lands straight in your Kindle on the day:

Huge thanks to Neil and the team at Burning Chair for asking me to reveal this cover, I LOVE IT! 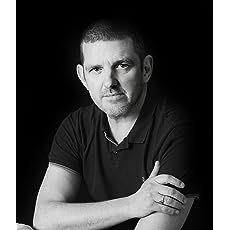 Neil was born in Liverpool in the 1960s. He recently left the Metropolitan Police where he served for over twenty-five years, predominantly as a detective, leading and conducting investigations into some of the most serious criminals across the UK and beyond.

Neil acted as a surveillance and covert policing specialist, using all types of techniques to arrest and prosecute drug dealers, human traffickers, fraudsters, and murderers. During his career, he successfully prosecuted several wealthy and corrupt members of the legal profession who were involved in organised immigration crime. These prosecutions led to jail sentences, multi-million pound asset confiscations and disbarments.

Since retiring from the Metropolitan Police, Neil has relocated to the Scottish Highlands with his wife and son, where he mixes freelance investigations with writing.