Good morning, Phil! What a pleasure to have you here, please introduce the character in terms of job, relationships, family etc. …

Jake Stevenson. Former police officer, now private investigator. Lost both his wife and daughter to a hit-and-run accident in 2009.

When did you create Jake?

I created Jake whilst on honeymoon in Mauritius nine years ago. I was beginning to pull the book together and wanted a strong lead character with depth who had experienced personal loss and hardships.

Jake was created to fit in with the book, plain and simple. However, once created, I could see that his character could develop, with the second and third books kinda fitting in around him.

He’s an ordinary guy, plunged into circumstances out of his control, yet he seems to take most things in his stride. Even being attacked by a vampire in the middle of a forest doesn’t break his resolve.

There is not much about him that I dislike. His taste in food, beer, and music is in-line with my own. My only criticism is that he tends to go through partners, as they usually die. He doesn’t kill them though. Just clarifying that point…

I’ve had great feedback about Jake. No one that I know, or readers I’ve never met have a bad word to say about him. He’s reliable, thoughtful and he cooks and does ironing…

He’s not based on myself, however he grew up where I did and drinks in the same pubs I drink in. He’s younger though, darker-haired and better looking. I envisioned him as a young James McAvoy, but with a Brummie accent.

I have an idea for a fourth book, in which Jake disappears whilst searching for a lost girl in Cornwall. Readers who have read the Forsaken Series will know the depths of the multiverse in the books, with Jake becoming imprisoned in another realm. Considering I like him, I treat him pretty badly…

I’d like to think so. He’s the sort of guy you could have a beer with, crack a joke with, and depend upon. We should all have a Jake Stevenson in our lives.

Thank you so much for taking he time to introduce Jake to my fellow bookworms, Phil!

Bookworms, if you want to get to know Jake properly, here’s the blurb for book in the Forsaken Series, Unknown …

It happens every year. A select few disappear, never to return.

From The Falkland Islands to the Himalayas, Puerto Rico to England – people are vanishing without trace or explanation. A young man who’s lost everything stumbles across an ancient secret.

Can he unlock the mystery? Will he find those who need him?

…can he escape the Unknown? 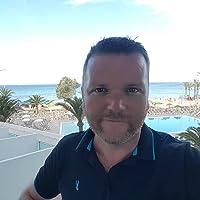 Phil Price was born in Sutton Coldfield in 1974. He lived in various places in the UK until his family settled in Rednal, a suburb on the outskirts of Birmingham in 1979. Growing up with an older brother and sister, he always flirted with reading, his home always littered with books. Then in 1997, Phil embarked on a travel expedition that took him from Greece to Thailand, via East and Southern Africa. Sitting in dusty bus stations in Kenya, Tanzania and Malawi with Wilbur Smith and James Herbert accompanying him, his imagination was sparked into life. Since those far-off days, he has never been without a book to read.

Phil started toying with the idea of writing a book in 2009. After writing a few short stories, he caught a whiff of an idea in his head. It started to evolve in 2010 until he had enough to begin his writing journey. Marriage and two children came along, with the story being moved to the back burner for periods of time. However, during those periods of writing inactivity, the story continued to manifest until it just needed one thing. To be written down.

The story was littered with places that had influenced Phil’s life. From the Lickey Hills in Birmingham to the Amatola Mountains in South Africa, with other many other locations, in-between and far beyond.

The book was finished sometime in 2014, left on his computer until a chance conversation with an author friend made Phil take the bold step to publish his story, Unknown.

From there, Phil’s love for the first book spurred him on, creating The Forsaken Series. A vampire/paranormal/horror trilogy, set in our world, and others too. His love of horror and all things supernatural, inspired by authors such as King, Herbert and others, helped create the epic series.

Next on the horizon, is a science fiction novel, titled Zoo, which will boldly go where Phil has never been before…

Aside from his writing, Phil lives on the edge of a small town in Worcestershire, UK. A wife and two sons keep Phil happily occupied as he steers his way through life, playing the husband, dad, and world creator in equal measure.