There’s something more than special about reading a book set in your home town. When it’s set on the streets you walk daily, and when the characters could be your next door neighbours the reading experience becomes something so different from the normal thrill you get. I’ve read lots of books set in and around West Yorkshire but this one, this one is set on the streets I grew up on and boy did it make it personal.

A.A. Dhand’s One Way Out is set on the streets of Bradford, and this exhilarating thriller had me captivated from the start.

When the alert sounds, DCI Harry Virdee has just enough time to get his son and his mother to safety before the bomb blows. But this is merely a stunt.

The worst is yet to come.

A new and aggressive nationalist group, the Patriots, have hidden a second device under one of the city’s mosques. In exchange for the safe release of those at Friday prayers, the Patriots want custody of the leaders of radical Islamist group Almukhtaroon – the chosen ones.

The government does not negotiate with terrorists. Even when thousands of lives are at risk.

There is only one way out.

But Harry’s wife is in one of those mosques. Left with no choice, Harry must find the Almukhtaroon, to offer the Patriots his own deal.

Because sometimes the only way to save lives, is to take them.

One Way Out starts with a scene I am more than used to. City Park is a place I take my children, we paddle in the mirror lake, we watch movies and sporting events on the big screen, my family and friends drink in the pubs around the water feature, we attend exhibitions and festivals there, my children go on school trips there. I know this place so well, I can smell it … to ‘watch’ it be subject to a terrorist attack in the book was utterly heartbreaking and harrowing. I could see the rubble of City Hall, see the smoke plumes over my city’s landscape.

This all made for such a deeper reading experience, it blew my mind!

I cried reading this book. Lots and lots of tears were shed. As I mentioned above, this was more of a personal read than anything I’ve read for a long time.

Dhand is a talent. The scary thing about the world he has created is that it isn’t a creation … it’s real.

I completely fell in love with every one of the characters, well, the ones I’m supposed to love, that is! Harry Virdee and his wife are caught up in the terror unleashed on Bradford by a far-right group, the Patriots. They have blown up the city centre and now have a bomb hidden inside a mosque which they will detonate if they aren’t handed the leaders of Almukhtaroon, a radical Islamist group. No one can leave any of the 105 mosques in Bradford, no one can enter. If the Patriots don’t get what they asked for, the bomb will detonate at 6.00 a.m. the next morning.

What follows is a race against the clock to find the mosque the bomb is hidden in, find the Almukhtaroon, and save the lives of thousands of people.

Virdee is then dragged into the politics, he is sent on a mission which tests the very core of his being. It is one of the most fast paced and exciting plots I’ve read. Utterly captivating and I was unable to put it down. I read this in one thrilling sitting and boy was I hooked.

Every word matters. Every chapter ending makes it impossible for you to stop reading.

I lost count of the number of times my jaw dropped, or I gasped out loud. My poor family lost me for the day, but it was worth it!

One Way Out is an absolute must-read for any Bradfordian, and any crime fan, it will take you to the darkest depths of a world some still don’t think exists but it will show the strength that runs through amazingly multicultural cities such as mine.

Thank you, Mr Dhand, I f*cking LOVED this one! (sorry for swearing, Mum!)

My hugest thanks to the team at Transworld Books and Anne Cater for my stop on the tour. 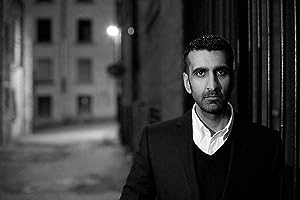 A.A. Dhand was raised in Bradford and spent his youth observing the city from behind the counter of a small convenience store. After qualifying as a pharmacist, he worked in London and travelled extensively before returning to Bradford to start his own business and begin writing. The history, diversity and darkness of the city have inspired his Harry Virdee novels.

6 thoughts on “One Way Out by A.A. Dhand is beyond brilliant … explosive in more ways than one and I’m thrilled to share my review @aadhand @transworldbooks @annecater @beckyshort1”