Well, what a day … I have the amazing Noelle Holten joining me today to introduce us to a character from her debut novel, Dead Inside.

Welcome to the Little Bookworm, Noelle, so happy to have you here. Now, can you please introduce the character in terms of job, relationships, family etc. …

DC Maggie Jamieson is an experienced police officer working for the Major and Organised Crime Department (MOCD) of Staffordshire police. Due to a difficult case, she has been temporarily seconded to a newly formed team, the Domestic Abuse and Homicide Unit (DAHU) to share her skills in solving serious crimes. She has one brother; Andy and her parents live in Glasgow. Maggie is single and wrestling with her own sexuality. She does have her eye on someone…but whether this develops any further is unclear.

Maggie was created in 2017. I needed a police officer that could come into a multi-agency team and share her skills as an experienced detective who investigates serious crimes. She was only supposed to have a minor role, but soon took over as the main character in the series.

Dead Inside is and has always been Lucy’s story, but my editor felt that the book needed a more investigative story – so although Maggie was in the story from the start, more chapters and story development was created to accommodate her, I guess!

I love her stubbornness the most. When she has an idea in her head, she just won’t let it go. She follows her gut instinct and although she may come across as being a bit overconfident, it is more about her fear that she will get it wrong, so she does whatever it takes to make sure that justice is served.

I want her to come out of her shell more, I think she is a great character, but we really didn’t get to see that in Dead Inside. She is a private person and could do with loosening up a bit…we’ll have to see if things will change in the future!

My editor loved her and wanted more of her in the book, but Dead Inside was more Lucy’s story – so although I did add more chapters with her, I think we have just scratched the surface. Some people felt she was a little too rude and pushy, but they also wanted to see more of her, so I must have done something right!

Maggie is named after a friend’s cat – so she doesn’t really share any of those traits! Ha ha ha. Every now again I recognise some of myself in Maggie and I have not done that intentionally, it just happened. I probably have injected a few traits from people I know. But she is definitely not based on anyone I know.

Plenty of plans for Maggie – we learn more about her personal life in the next book and further on down the road, she may even find a partner…but only if I want to be nice!

I definitely would be friends with her in real life. I think there is a fun side underneath all that seriousness – and after a few rhubarb gin and tonics, I am sure I could get her to show it!

Huge thanks for joining me and sharing Maggie with us, Noelle!

Bookworms, I know for a fact how wonderful this character is, and the rest of the cast to be honest! So I can tell you without a shadow of a doubt, YOU NEED TO READ THIS BOOK!

A dark and gripping debut crime novel – the first in a stunning series – from a huge new talent.

The killer is just getting started…

When three wife beaters are themselves found beaten to death, DC Maggie Jamieson knows she is facing her toughest case yet.

The police suspect that Probation Officer Lucy Sherwood – who is connected to all three victims – is hiding a dark secret. Then a fourth domestic abuser is brutally murdered.

And he is Lucy’s husband.

Now the police are running out of time, but can Maggie really believe her friend Lucy is a cold-blooded killer? 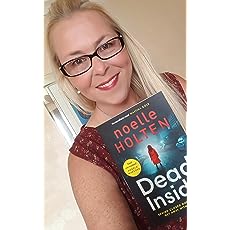 Noelle Holten is an award-winning blogger at http://www.crimebookjunkie.co.uk. She is the PR & Social Media Manager for Bookouture, a leading digital publisher in the UK, and was a regular reviewer on the Two Crime Writers and a Microphone podcast. Noelle worked as a Senior Probation Officer for eighteen years, covering a variety of cases including those involving serious domestic abuse. She has three Hons BA’s – Philosophy, Sociology (Crime & Deviance) and Community Justice – and a Masters in Criminology. Noelle’s hobbies include reading, author-stalking and sharing the booklove via her blog.
Dead Inside is her debut novel with Killer Reads/Harper Collins UK and the start of a new series featuring DC Maggie Jamieson.

2 thoughts on “Today I’m joined by debut author Noelle Holten who’s shining the spotlight on one of her characters! #CharacterSpotlight #DeadInside @crimebookjunkie @KillerReads”