It’s been a while since I last read a Michael Connelly book and boy have I missed them!

I lost track of the Bosch books when my children were younger and never managed to pick it back up so I was ecstatic when they became a TV show over on Amazon Prime. And yes, I know, the books are ALWAYS better, when you’re so far behind with a series, it’s hard to catch up.

So imagine how happy I was to discover Bosch is back in a new series with Detective Renee Ballard.

I’m over the moon to be sharing my review today as part of the blog tour but before I do, here’s the blurb … 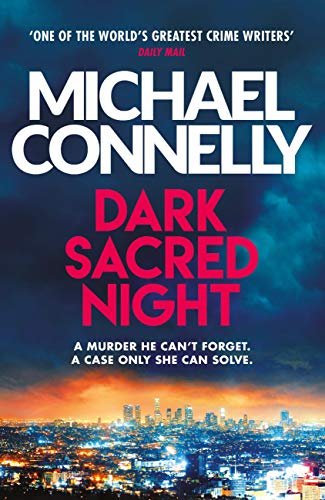 Daisy Clayton’s killer was never caught. In over ten years, there has been no breakthrough in her murder case.

Detective Renée Ballard has faced everything the LAPD’s notorious dusk-till-dawn graveyard shift has thrown at her. But, until tonight, she’d never met Harry Bosch – an ex-homicide detective consumed by this case.

Soon, she too will become obsessed by the murder of Daisy Clayton.

Because Ballard and Bosch both know: every murder tells a story. And Daisy’s case file reads like the first chapter in an untold tragedy that is still being written – one that could end with Ballard herself, if she cannot bring the truth to light…

Ballard and Bosch are going to make a fantastic team.

When they meet on the graveyard shift, Renee Ballard knows something about the infamous Harry Bosch isn’t quite right. His reasons for being in her station don’t quite hit the realism mark and she is determined to find out what he’s up to.

Bosch is still hung-up on a cold case. Daisy Clayton’s murder. There’s been nothing new for them to go at for almost ten years and Bosch isn’t prepared to let it lie any longer.

I adored this one.

A great start to a new series and one I’m not going to be letting fall to the wayside.

There was a lot of build up on this one, which is only to be expected in the first of a new series, we got some decent backstory and Renee and I can see how she and Bosch are going to gel as the series develops. Harry still seems broken. He felt tired in this one and perhaps that’s because Maddie wasn’t around? Who knows?

Renee is a great new character. She’s got her own demons and like most women in a man’s world, she has a lot to prove. I really warmed to her at first and although she makes shaky decisions, she has a real potential to make a huge difference. When the going gets tough, she jumps straight in and although her decision making skills need a little work, I can see she’s going to become a firm favourite on the crime fiction lovers’ bookshelves!

What I will say about the plot is this …

When the tension kicks in it doesn’t let up … the twisty turny plot is perfectly executed and will keep you guessing. And we are left with a whole new route for Bosch to take.

I cannot wait for the next one!

Huge thanks to Tracy Fenton and the team at Orion Crime for my spot on the tour and my review copy of the book. It’s certainly one I’ll treasure.

A former police reporter for the Los Angeles Times, Michael Connelly is the internationally bestselling author of the Harry Bosch series, and several other bestsellers including the highly acclaimed legal thriller, The Lincoln Lawyer. The TV series – Bosch – is one of the most watched original series on Amazon Prime and is now in its third season. He has been President of the Mystery Writers of America, and his books have been translated into thirty-nine languages and have won awards all over the world, including the Edgar and Anthony Awards. He spends his time in California and Florida.