It feels like I’ve been reading this book for almost a year … not because it’s long and boring, far from it, but because I read a sampler of it last year after the Theakston Crime Festival in Harrogate and I’ve only managed to finish the full book this weekend as I couldn’t face having to stop reading it, and since getting my complete copy three weeks ago, I haven’t had any decent time slots to get stuck in.

Pesky bloody adulting getting in the way of my reading again!

Anyway, on Saturday I had a three hour train journey to London and three hours back so I had the perfect opportunity to get snuggled up in my seat with a box of mint Matchmakers and devour the book and the chocolate!

And oh my goodness!

On My Life by Angela Clark is phenomenal. It is powerful, disturbing, and beyond brilliant! 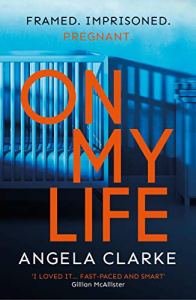 Jenna thought she had the perfect life: a loving fiancé, a great job, a beautiful home. Then she finds her stepdaughter murdered; her partner missing.

And the police think she did it…

Locked up to await trial, surrounded by prisoners who’d hurt her if they knew what she’s accused of, certain someone close to her has framed her, Jenna knows what she needs to do:

Clear her name
Save her baby
Find the killer

But can she do it in time?

On My Life is by far one of the best psychological thrillers I’ve ever read.

Clarke has brought us an insight into the women’s prison service while telling an emotionally charged psychological thriller that will have you turning the pages so fast, you’ll get RSI.

Jenna is having the time of her life. She’s getting married to the most eligible bachelor in the town, she has the perfect stepdaughter, the perfect job, and her whole life in front of her. Until she’s locked up for murdering her fiancé and his daughter.

And then she finds out she’s pregnant.

What follows is the most harrowing insight into the prison service I’ve ever read. I don’t know why … perhaps because it’s a women’s prison and I’ve never read a book which shows what life is really like behind bars. I think there’s a general feeling that prisoners are treated better than they perhaps should be but that’s not the case in this book. I’ve also always thought that the legal side of things was a lot different to the way it’s been shown in On My Life and I know the author has done her research on this.

It’s terrifying that the idea of innocent until proven guilty is not adhered to. If you get put on remand until your trial, you are treated the same as every single inmate whose guilt has been established and who has been officially charged and sentenced. The treatment of these women, guilty or not, was appalling and I hope that there was some artistic licence used on this side of the book because otherwise, the system as it stands needs some serious attention and intervention.

Back to the plot.

Jenna is an amazing character. The strength she shows to deal with her situation is admirable and makes her such a brilliant character it’s hard not to fall in love with her. Jenna is determined to prove her innocence but with no one to talk to and no one who will listen – she might as well be shouting into the wind.

Her cellmate, Kelly, is a tower of strength for Jenna. She is young but has been inside for a while and shows Jenna the ropes. Another character who you will fall in love with. She is feisty, determined, loving, and loyal. I suppose, she’s all the things you’d want the person who you have to spend almost 24 hours a day with, to be.

As Jenna starts to think back over her life and see who could want her locked up, we see another side to her new family. All the money in the world can’t buy class and manners, and all those little things she saw in the previous year, start to look far more sinister now her stepdaughter and fiancé are gone.

Jenna tells her story in Now and Then chapters which are perfectly paced and flow between the two times flawlessly. I adore this set-up in a book; I love knowing what’s happened, to a certain degree, then working backwards with the characters to discover how they got to where they are now. The tension steeped into the pages of On My Life is executed sublimely, Clarke has a real knack for sucking you into the pages, making you feel, smell, and hear everything as the characters do. I was almost inside that horrible building with Jenna and I loved it!

But why on earth would anyone want Jenna framed like this? Who could hate her that much? Well, the truth is so shocking I scared a train load of people when I shouted, ‘What the actual fu*k!?’ out loud!

Needless to say, this is an absolute belter, it should be on the TBR pile of every bookworm in the world.

Seriously, go and get your copy now!

Angela is The Sunday Times bestselling author of the Social Media Murder Series, including Follow Me, Watch Me, and Trust Me. Follow Me was named Amazon’s Rising Star Debut of the Month January 2016, long listed for the Crime Writer’s Association Dagger in the Library 2016, and short listed for the Dead Good Page Turner Award 2016. Follow Me has been optioned by a TV production company. Angela’s humorous memoir Confessions of a Fashionista is an Amazon Fashion Chart bestseller.

The horror screenplay, Lure, which she co-wrote with Cal Moriarty, placed third in the Los Angeles Independent Film Festival in 2017. Angela’s debut play, The Legacy, enjoyed a sell-out run at The Hope Theatre in June 2015, and the Mail Online gave it five stars, calling it ‘witty, insightful and powerful’.

Angela appeared on the BBC Ouch’s Edinburgh Festival Stage in Tales of The Misunderstood, and hosted the book show Tales From Your Life on BBC 3 Counties in 2017. During 2015, she hosted and produced the current affairs radio show Outspoken on Radio Verulam. Angela will be on CBS Reality’s real life crime series Written in Blood, airing Autumn 2017. She also features regularly as a panel guest on BBC 3 Counties, BBC Radio 4, and the BBC World Service, among others. Angela has given talks and masterclasses for many, including City University’s Crime Writing MA, Noirwich Crime Writing Festival, Camp Bestival, Panic! (in partnership with Create, the Barbican, Goldsmiths University and The Guardian), Meet a Mentor (in partnership with the Royal Society of Arts), Northwich Lit Fest, St Albans Lit Fest, BeaconLit, and the London College of Fashion.

In 2015 Angela was awarded the Young Stationers’ Prize for achievement and promise in writing and publishing. Angela, a sufferer of the debilitating chronic condition Ehlers Danlos III, is a Fellow of the Royal Society of Arts, volunteers with Womentoring, Meet a Mentor and at HM Prisons. She is passionate about bringing marginalised voices into the industry. You can find out more about her at http://www.AngelaClarke.co.uk

13 thoughts on “On My Life by Angela Clarke is one of the most amazing psychological thrillers I’ve EVER read! Check out my #review #OnMyLife @TheAngelaClarke @mulhollandbooks”