I’m delighted to be on the blog tour for Awakening the Trinity today but must first apologise for the delay in this post going live thanks to a technical glitch.

Author Brittany Elise joins me to shine the spotlight on her leading lady, Quinn … Over to you, Brittany!

Please introduce the character to my readers …

The character that I would like to spotlight is my young heroine, Quinn Callaghan. Quinn is a 17-year-old witch with a rare power called Blood-Magic. Through blood, she is able to see a person’s future or glimpse a scene from their past. She lives with her father in a town called Silver Mountain (totally fictional town) in the mountains of North Carolina.

Quinn was created when I was driving to work one morning listening to a song called ‘Strange and Beautiful’ by Aqualung. I started imagining what the music video would look like if I were the one creating it, and as I listened to the lyrics, played out the video in my head.

I think I’d have to say neither. I’m not one of those people who plan out what I’m going to write out in every chapter before I sit down at the computer. I had no idea how I wanted the story to end, though I suppose I knew what kind of person I wanted Quinn to be. I knew I wanted to watch her grow, and work through the conflicts she was presented with. I wanted her to be a fighter.

Quinn is very protective of her friends and family. She shields a lot of what she’s thinking or feeling if she knows it will spare someone else the heartache. There’s a major reason why she’s like that (which I can’t give away) but you’ll see that as you get to know her through the story. She’s a fighter, and she doesn’t flinch in the face of the unknown.

What I like most about her is also what I dislike, (how’s that for irony?) Sometimes she takes on more than she should, or puts herself in danger when others try to help. She’s not good at relying on others.

Did your early readers/editorial team like Quinn to start with or did you have to change her in any way?

I had 3 Beta readers for this story before it ever made it to the publishing team, and I was very fortunate that my Beta’s seemed to love the characters as they were written. (I’ll say that’s pretty rare. I did not have the same response with the characters in my first novel.)

Quinn is entirely from my imagination. She’s the brave girl I wish I would have been at her age. Especially for what she’s gone through and goes through.

The readers will be seeing more of Quinn in the near future. I’m actually working on the sequel for Awakening the Trinity as well as the prequel. You can expect more adventure, and more growth as she takes on a whole new life chapter.

I’d like to think so. She’s someone I would want to have in my corner, that’s for sure.

I think she sounds pretty awesome! Thanks so much for joining us and sharing this with us.

Huge thanks also to Rachel over at Rachel’s Random Resources for my spot on the tour.

If you want to know more about Quinn, Awakening the Trinity is out now, here’s the blurb … 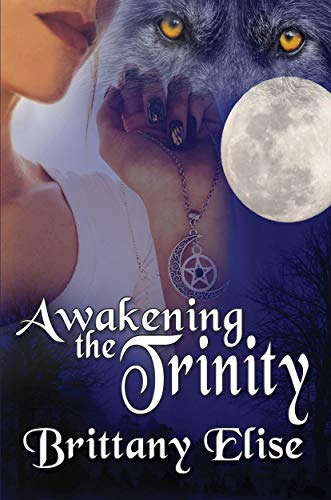 Silver Mountain is more than just a small rustic town tucked within the evergreen pine forest. It’s a supernatural hotspot–a nexus of raw energy hidden within the forest.

In the seventeenth-century, an all-powerful witch called Rionach the Dark ruled the Celtic nations with an army of enslaved werewolves. In order to restore balance between Light and Dark, the Trinity of Light was summoned to vanquish the Dark Witch and end the Battle of the Dark Ages.

Seventeen-year-old Quinn Callaghan lives in the small, rustic town of Silver Mountain. Its location may be rural, but it is home to an ancient pine forest that surrounds a supernatural hotspot–a nexus of raw and powerful energy.

When a charismatic witch from Ireland, and a mysterious guy with a secret of his own are drawn to the area, Quinn finds out that she inherited her rare abilities from a revered ancestor. Could it be that she shares a bloodline with the Original Trinity? Nearly 300 years later, the Darkness is returning to Silver Mountain, and the Trinity must stop it.

My love for writing began at a very young age–way before I could even type on a keyboard. I was always writing short stories and poems with a fan club of one (my mom.) I never stopped writing, but I don’t think I believed in myself enough to actually pursue it as a career. When I enrolled in college, I took as many creative writing classes as they offered, and ended up graduating with a degree in photography and minoring in English. I enjoy art in all its forms, but writing has always been my first love. Even when I was pursuing other careers, writing was always my go-to comfort. I later became an animal obedience instructor and met a children’s author through my dog training. She helped me get my foot through the door, so to speak, and I haven’t turned back since. During the day, I manage an FBO at my local hometown airport, and by night, I dive into my writing with my husband and my four-legged children by my side.