Hi Emma, I’m Kate and many thanks for having me. A bit about me, I was born near Liverpool and now live in Devon. I’ve been writing for more years than I care to remember! In fact, I tend to think in decades now, rather than years.

I have always invented characters and Hassan and his family were very vivid to me and demanded to be written about! I first introduced them in a slice-of-life novel Seaview Terrace about neighbourhood conflicts in a seaside setting. Hassan arrives one summer and stirs up the community there. His children are only toddlers at this point. But I wanted to home in on them and their lives in a different story, time and setting, when Hassan’s two daughters were older. That became Far Cry From The Turquoise Room and it has a very different tone and feeling to Seaview Terrace. It’s not in any way a sequel as they are both standalone novels although Hassan and his family are in both novels.

It means a great deal. I am really thrilled and honoured to have this award from the readers. When an author writes a book, there’s no better feeling than to connect with readers and have that book appreciated by readers. A huge thanks to Pauline too, for all the time and energy she puts into this.

I think I am writing my 15th novel so maybe I should just highlight a few!

My first ever novel which I started writing at the age of 19 was originally called Where A Shadow Played? and won a Southern Arts Bursary when I rewrote it in the early 90s. Now called Did You Whisper Back? It’s a psychological thriller about family secrets and the descent into mental breakdown.

My next novel Fall Of The Flamingo Circus was my most successful in that it was published by a traditional publisher in paperback (1990) and also in US hardback in the same year. It’s written in the form of a diary and describes Lauren’s life of family violence and punk rock.

Down The Tubes is a hard-hitting story of addiction, family breakdown and homelessness, based on my experience of working in the addictions field for many years. It deals with the devastating effects of child sex abuse on a young man’s life.

Savage To Savvy is a psychological novel where psychology graduate, Heidi Harper is appointed to work with a professor who is pioneering a new project to rehabilitate dog-reared feral child, Nicki. Heidi is soon asking questions and her mission takes on sinister overtones. Savage To Savvy was an Amazon Breakthrough Novel Award (ABNA) Quarter-Finalist in 2012

The Other Side Of Carrie Cornish is about an all too familiar situation most of us dread – having our peace and lifestyle shattered from next door neighbours, how much more challenging it is for the ill and disabled to cope with and just how blurred the lines become between victim and perpetrator. It is also about that uneasy conflict between one’s political and social ideals, and one’s social circumstances.

Little Guide To Unhip is my only non-fiction book so and charts my own personal unhip top 50 with the likes of Gilbert O’Sullivan, Morris Dancing, Vicar of Dibley, Shopping Trolleys and Brollies. Each is given an unhip rating up to five for you to keep a count of your own and includes personal anecdotes. There is also a ‘bubbling under’ list for a further those unhips things not quite making the top 50.

I have also written many short stories, some of them have been published and or shortlisted for various awards. Most of those are published in Tales By Kindlelight.

Are you working on a new book? Tell me about that

I’m writing a follow up to Down The Tubes although I don’t usually do follow ups!  It is still very much a work in progress but it’s about Michael’s story two decades on when something momentous happens in his life, which knocks him off course (again) causing him to relapse. There are more family strains as his past comes back to haunt him and new revelations come to light.  He finds he’s not beaten the addiction demons yet after all but the opening event acts as a catalyst for change. Michael is a survivor and hopes to get his life back on track again in his life though perhaps not quite as he thought.

You will find me reading, listening to music, spending far too much time on Facebook and a bit of online campaigning against social injustice. I also love cats, hanging out with my family, photography, and LFC. I have a long-term illness so my time and energy is limited.

My mother is the first. She’s not a published author but she was going to a writing group and writing a novel when I was 17 and that had an enormous influence. I was able to pick her brains. She also made it seem a normal thing to be doing J

It’s very difficult to pick a second and third. I suppose Sylvia Plath’s The Bell Jar made an big impression on me when I read it aged 18 or 19. I’ve not reread it but it would be interesting – if I ever get the time – to see what impression it would have on me now, so many years on.

As for a third – there are just too many authors who influence me all the time. These authors include, Toni Morrison, Kate Atkinson, Ali Smith, Jane Gardam, Rachel Joyce, Helen Dunmore, Jon McGregor, Eimear McBride, James Bowen (I’m a real sucker for anything with cats) but also many indie writers like Chantelle Atkins, Miriam Hastings and Gerald Hansen, as well as indie autobiographies novels from Tony Shelley and William Booker and survivor autobiographies from Kat Ward and Raymond Poar.

I mainly write in what is known as the literary fiction genre (although I prefer not to describe it as such as it’s so misunderstood). But here I mean literary in the sense of edgy and/or character-driven and being more free with language, style, tense, point of view and word length, rather than having to stick rigidly to certain formula. I do realize though that this is not everyone’s cup of tea.

Which other genre would you choose if you had to change?

Although literary fiction has been my main genre, I would also like to write more short stories, more poetry (both suiting my limited energy and output these days!). But also more non-fiction in the form of ‘little guides’ and I also plan to do an autobiography with a slant.

Marmite – yes or no? Yes

Early riser or sleep in? Sleep in

Planner or pantster? Both

Pineapple on pizza – yes or no? Yes! I must have had the first in 1988 in St Ives! It was a real novelty then!

You’ve got me again there, Emma. I can never narrow things down to an all time favourite! I have the same problem when someone asks me my favourite song. But recent books that have stayed with me are Pax by Sara Pennypacker and The Many by Wyl Menmuir but there are loads of other favourites!

It’s been a pleasure. Thank you.

Follow the link if you’d like to find out more about the Chill With A Book Awards.

You can get your copy of Kate’s book, Far Cry From The Turquoise Room now, here’s the blurb … 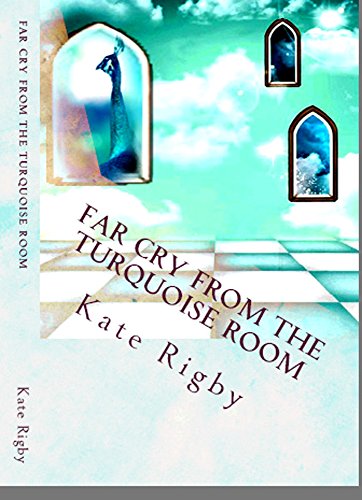 Told from both daughter and father’s perspectives, Far Cry From The Turquoise Room is a coming-of-age, riches-to-rags tale of loss, resilience, and self-discovery, just before the millennium. It is also about the passage of childhood into puberty.

Keep up with all Kate’s news by following her on her various social media accounts: