Huge congratulations on winning your Chill Award! You must be so happy your work has been recognised in this way.

Now, before we carry on, would you please introduce yourself to my readers, just in case they don’t know you already …

The third act of my life is full of reading, writing, and living my dream of becoming an author. For over ten years I struggled to write the story of Ontario’s earliest settlers in my Loyalist trilogy. It’s three novels of family struggles, political crap, wars and rebellions, and characters who prove that ordinary people can rise to become extraordinary when faced with circumstances way beyond their control.

This Chill Readers’ Award is for The Loyalist Legacy, the third book in the trilogy which follows the settling of Canada in the 18th and 19th centuries. I am descended from Loyalists so that was a factor. But once I dreamed up my fictional family of Garners I just had to keep going. They embodied all the struggles my ancestors might have had and certainly would have known about. Finally I set the book on the 200 acres of land north of London, Ontario, where my great, great, great grandparents actually settled. Pretty cool.

We writers spend big parts of most days crafting our stories, researching the details, and becoming fully immersed in worlds of our own making. Most of this is in solitude. To have others recognize the results of that labour is sugar on my fresh strawberries.

The Loyalist’s Wife is the story of a young couple in 1778 who live in the wilds of New York state. He decides to join Butler’s Rangers and fight for the British in the American Revolution. He leaves his wife behind to try to hold on to their land, a decision that proves to be unwise.

The Loyalist’s Luck takes the same family across the Niagara River into present-day Canada where the revolution still hounds their family through to the end of the War of 1812. They suffer burnings, deaths of children, and soldiers ravaging their homes but live to fight another day.

Currently I’m writing a narrative non-fiction, The Man Behind the Marathon, which thematically is similar to my current works. Ordinary people can become extraordinary in spite of seemingly insurmountable goals. Most of the world knows about the young cancer victim, Terry Fox, who in 1980 ran a marathon every day in spite of being an amputee, trying to run across Canada, until cancer struck him again. I’m writing about Ron Calhoun, who helped Terry and four others in long-distance runs or walks. Ron is the man who came up with the title of Terry’s run, the Marathon of Hope, and he has spent his life going above and beyond the call in helping others achieve lofty goals.

I like to walk, golf, swim and spend time with my family.

Historical fiction allows the history to be used as a backbone for the story yet I can let my imagination run with the fiction parts. That is just open-ended fun. HF also seems to make the story more real, creating a movie in my mind that is oh so compelling.

Which genre would you choose if you had to change?

I love Diana Gabaldon’s Claire Randall for her ability to keep her strong personality even when going back in time 200 years. I like my own Lucy Garner for her strength and tenacity while biding her time to make the right thing happen.

PJs or ‘normal’ clothes when writing? All dressed with make-up and everything. It’s my job.

Planner or pantster? A little of both but mostly pantster.

Book or kindle? Book for sure.

Pineapple on pizza – yes or no? No

And finally … What’s your favourite book of all time? Don’t have one. Ask me for 50!

You can keep up with all Elaine’s news on the following platforms:

You can get your copy of the now, here’s the blurb … 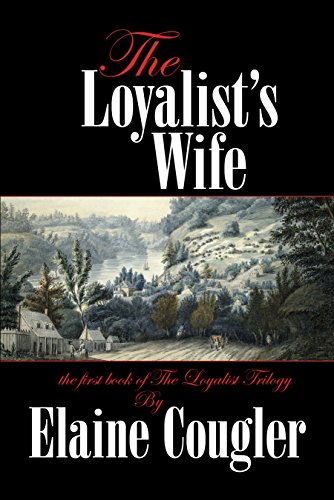 When American colonists resort to war against Britain and her colonial attitudes, a young couple caught in the crossfire must find a way to survive. Pioneers in the wilds of New York State, John and Lucy face a bitter separation and the fear of losing everything, even their lives, when he joins Butler’s Rangers to fight for the King and leaves her to care for their isolated farm. As the war in the Americas ramps up, ruffians roam the colonies looking to snap up Loyalist land. Alone, pregnant, and fearing John is dead, Lucy must fight with every weapon she has.
With vivid scenes of desperation, heroism, and personal angst, Elaine Cougler takes us back to the beginnings of one great country and the planting of Loyalist seeds for another. The Loyalist’s Wife transcends the fighting between nations to show us the individual cost of such battles.

More about the author …

Award-winning novelist, Elaine Cougler is a graduate of Western University who taught French, English and Computer Studies at various high schools across Ontario. She wrote two books of family memories, a cookbook, and a children’s book before finding her passion in writing her three historical novels: The Loyalist’s Wife, The Loyalist’s Luck, and The Loyalist Legacy (2016). A lover of people and especially writers, Elaine delights in speaking to groups large and small. Her teaching skills make her a natural at leading workshops on writing. On her website, she blogs about the journey to publication and beyond. She makes jewelry in her spare time and once made a king-size quilt just to see if she could!