I am over the moon to welcome David Tallerman to my blog today as we shine the spotlight on the main character in his latest book, The Bad Neighbour.

Ollie Clay, the protagonist of my new novel The Bad Neighbour, is a normal guy fallen on hard times that are at least partly of his own making. In his mid-twenties, he’s working as a supply teacher, a job he drifted into and has come to discover he loathes, though not quite enough to do anything about the fact. His relationship with his mother is strained, and his father’s been in prison for years, having taken a path into violence and crime that Ollie himself only narrowly avoided as a teenager. The only people in his life he particularly values are a couple of friends he’s clung onto from his university days and his new girlfriend, Yasmina. But everything is shaken up when an inheritance of over fifty thousand pounds falls into Ollie’s lap and he decides to invest it in a property, even if that means the scruffiest of houses in the most rundown suburb of Leeds. He suspects it may be a bad decision, but he only really begins to appreciate how bad as he uncovers just who he’s moved in next door to and how potentially dangerous his new neighbour is.

Ollie came into being when I first began plotting the book, so I guess sometime in mid-2014. I tend to plan narrative more than characters, so in that sense he was really born with the first page of the novel. Telling The Bad Neighbour in his voice meant that I had to find that voice basically straight away, and so within a page or two I had a clear sense of who Ollie was going to be.

It’s always a bit of both. The plot I’d mapped out dictated a lot in terms of who the main character was going to be: someone who began the book by making a misjudged decision and then proceeded to double down on it rather than looking for a sensible way out. So the early question became, what kind of a person would get themselves into this fix? To some extent, the answer I came back with was, most people, given the wrong circumstances. So to some extent Ollie was typical of a guy in their twenties who hadn’t had the easiest time of it and was yet to fully figure out what being an adult entailed. Then again, the plot also needed him to willingly behave in a fashion that not everyone would, and that informed his backstory and the fact that he’d come awfully close to following his deadbeat dad into prison.

In his better moments, Ollie has a sense of humour about him, and also a sense of his own foolishness; he’s not blind to the bad calls he makes, he just can’t quite get to the point where he stops making them. More than that, I like that he genuinely cares about his girlfriend Yasmina. She brings out the best in him, and he’s a noticeably different, much more sympathetic character when they’re together. Whenever I was writing those scenes, I found myself wanting to give the poor guy a break, and feeling bad when instead I tightened the noose another notch!

Ollie is awfully quick to make excuses for himself, when he really ought to be taking responsibility for his actions. He has a bad tendency to make everything somebody else’s fault and to downplay his own culpability. As the book goes on, it’s that more than anything that leads him to some extremely dark places. He never quite grasps that he’s his own biggest enemy, even when the fact is staring him in the face, and as a result he makes some reckless calls that ultimately put not only him but the people he cares about in danger.

Did your early readers/editorial team like him to start with or did you have to change Ollie in any way?

I don’t know that Ollie is necessarily a protagonist you like as such! I think it’s possible to sympathise and even empathise with him, but he was never really intended to be someone that the reader is one hundred percent on side with. The goal, I guess, was more than you’d be rooting for him despite his actions more than because of them, as it becomes apparent that, while he’s far from perfect, the people he’s up against are a good deal worse. So I guess that in so much as I got feedback from readers along the way, it was the reaction I was looking for.

Do they have any similarities with anyone real?

There are always little snippets here and there, and there are some ways in which Ollie’s sort of an alternate universe version of myself at that stage in my life, if I’d made very different choices along the way; a lot of his frustration at how life refuses to work out the way he thinks it should is my own from that time. And then elements come from friends and acquaintances and really from all over the place. Ultimately I’d feel like I hadn’t done my job properly if I could point at any one person and say “that’s who this character was based on” … going back to an earlier question, you’re always looking for a character who reacts in just the right ways to the narrative they’ve been dropped into.

The Bad Neighbour was always intended to be a one-and-done novel, so as far as I’m concerned, this is the entirety of Ollie’s story – though you never really know! Maybe I’ll wake up one morning itching to figure out where he goes from here.

I feel mean saying it, but I think we probably wouldn’t! Ollie and me don’t really have a lot in common, and the experiences of mine that he inherited were mostly negative ones that I wouldn’t necessarily want to come up against again through someone else. The thing we most share is the experience of buying a rundown house that wasn’t quite liveable in, and though I wasn’t as naive as Ollie about the decision, it was still a scary, intense time, so I can’t really see us sitting down over a pint and swapping horror stories about peeling wallpaper and dodgy electrics!

Ollie certainly sounds like someone I want to get know better! Huge thanks for joining me, David!

And if you do too, here’s the blurb …

When part-time teacher Ollie Clay panic-buys a rundown house in the outskirts of Leeds, he soon recognises his mistake. His new neighbour, Chas Walker, is an antisocial thug, and Ollie’s suspicions raise links to a local hate group. With Ollie’s life unravelling rapidly, he feels his choices dwindling: his situation is intolerable and only standing up to Chas can change it. But Ollie has his own history of violence, and increasingly, his own secrets to hide; and Chas may be more than the mindless yob he appears to be. As their conflict spills over into the wider world, Ollie will come to learn that there are worse problems in life than one bad neighbour.

FLAME TREE PRESS is the new fiction imprint of Flame Tree Publishing. Launching in 2018 the list brings together brilliant new authors and the more established; the award winners, and exciting, original voices. 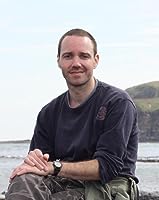 David Tallerman is the author of the recently released crime thriller The Bad Neighbour, ongoing YA fantasy series The Black River Chronicles, the Tales of Easie Damasco trilogy, and the novella Patchwerk. His comics work includes the absurdist steampunk graphic novel Endangered Weapon B: Mechanimal Science, with Bob Molesworth.

David’s short fiction has appeared in around eighty markets, including Clarkesworld, Nightmare, Alfred Hitchcock Mystery Magazine, and Beneath Ceaseless Skies. A number of his best dark fantasy and horror stories were gathered together in his debut collection The Sign in the Moonlight and Other Stories.

He can be found online at davidtallerman.co.uk