Regular readers will know that I have taken to audio books in a big way recently, so it gives me great pleasure to be on the blog tour for this audio-only book, Dead in Venice by Fiona Leitch today.

Before I start harping on, here’s the blurb … 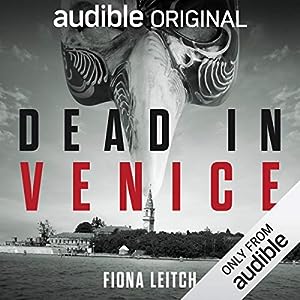 Bella Tyson is a famous 40-something crime writer suffering from writer’s block ever since a bitter divorce two years before. When a fan offers her the use of an apartment in Venice, Bella jumps at it, hoping a change of scene will have her writing again. Once there, she soon meets Will, a charming Englishman, who shows her around the city.

Enchanted by both Will and her new surroundings, Bella decides to write a supernatural murder mystery and begins researching local legends and the city’s more sinister side, including an illicit visit to the island of Poveglia, spooky former home of Venice’s asylum. Soon Bella uncovers more than she has bargained for and finds herself enmeshed in a series of gruesome real-life murders that uncannily mirror the legends she is researching.

As she and Will join forces to investigate, real life and local lore merge disconcertingly – for nothing in Venice turns out to be what seems, including Will….

I bloody loved this and finished it over the course of two days.

As the blurb tells us, Bella has a nasty case of writer’s block and so jumps at the chance of a holiday to Italy for some inspiration. Once there she meets Will. The posh Englishman who seems far too perfect but whom she quickly starts to fall for.

I love Bella. I really do. Told from her point of view, I was inside her head and completely absorbed in everything she said and did, and I was rooting for her for the off. Working with authors in my day job I know how crippling writer’s block can be, so I was hoping for her to overcome it … and boy does she!

When she arrives in Italy, everything is new and tense and this isn’t helped by the fact she speaks no Italian. What follows is a bit of a slow to build plot which twists and turns as the folk lore Bella has started to research for her book start to come true! Some of the tales had me shuddering, but I do love that kind of thing, so it was right up my street.

Being in a strange country, Bella has no one. No one she can properly turn to, apart from hot toff, Will. But from the off there’s something about him that isn’t quite right … or is there? Bella has recently divorced, and so trust isn’t the easiest thing for her grasp, but what choice does she have?

With a strong cast of characters, it was easy to fall into this one and not want to hit the pause button.

My only ‘issue’ was the genre … with the blurb telling us about the folk lore and an asylum and murders, I was expecting something different, something more mainstream and defined in that particular genre, what we actually get is a combination of gritty crime thriller, hilarious rom-com, with a splash of the heart-wrenching emotions. And it works.

It works so well, and I loved it. Completely.

And I love it when that happens; when I’m expecting one thing and get something so much more instead.

Bella is real, and her story feels real. It’s the kinda thing I daydream about happening to me. I want to go somewhere and have weird and crazy and scary things happen to me! She is literally living her storyline, and it’s wonderful.

I’d strongly recommend this one, folks!

Huge thanks to the author and Anne Cater over at Random Things Tours for my place on the tour and for my review copy of the audio book. Make sure you follow the rest of the tour:

You can get your copy now over at Audible:

Fiona Leitch is a writer with a chequered past. She’s written for football and motoring magazines, DJ’d at illegal raves and is a stalwart of the low budget TV commercial, even appearing as the Australasian face of a cleaning product called ‘Sod Off’. After living in London, Cornwall and New Zealand she’s finally (for the moment) settled on the sunny South Coast of England, where she enjoys scaring her cats by trying out dialogue on them and writing funny, flawed but awesome female characters.

Her Westminster-set romantic comedy ‘Parliamentary Affairs’ was recently optioned by an up and coming LA producer, and her action comedy ‘Lost In Berlin’ was a finalist in New York’s Athena IRIS Screenwriting Lab 2017. She’s also been shortlisted for the BBC Writers Room. Her debut novel ‘Dead In Venice’ has just been shortlisted for the Audible New Writing Grant, while her short horror story ‘Tinder’ was selected for the Twisted 50, volume two anthology, published Spring 2018