Historical fiction author Douglas Jackson is one of my dad’s favourite authors so I’m over the moon to welcome him to #ETLBW today to chat about his books and writing life.

Thanks for joining me today, Doug. I’ll jump straight in and ask what process do you follow for your writing? Are you a planner or do you just let it flow?

When I wrote my first novel, published as Caligula I was just making it up as I went along. I made a lot of mistakes and wrote myself into any number of blind alleys. It began with the words ‘My father was a great man, he tamed the wild beasts and made them do his bidding.’ which I thought was great, until I realised it meant changing to the father’s point of view halfway through the book. An elementary mistake, but all part of the learning process. Another part of the process is learning never to throw anything away. I was able to work the line and the character into Glory of Rome, part of a completely different series, ten books later.

I write straight to the Mac and these days I follow the advice of my editor, Stan, who suggested plotting out the books in advance with a paragraph for each chapter. That allows you to navigate much easier through the narrative. I always know how I’m going to finish a book, but using this method I have signposts along the way and I almost never get lost. It’s as if you’ve already written the book in your head before you hit the first keystroke.

Do you attend writing/author focused conferences? Which is your favourite?

I’ve attended many writing conferences. If I have a favourite it’s the Historical Novel Society Conference which takes place every two years. Fantastic events that allow you to meet authors from all over the world and make contact with avid book fans. I’ve shared panels with Bernard Cornwell, Robyn Young, Elizabeth Fremantle, Andrew Taylor, Ben Kane, Anthony Riches, Simon Scarrow, and Angus Donald, among many others. Sadly I missed out on this year’s event in Scotland for family reasons, but it looks as if everyone had a fabulous time.

How many manuscripts do you have that you never submitted? Will you consider approaching your publisher with them now?

I have one manuscript, for a book called Brothers in Arms, that I’ve never submitted to a publisher. It’s the sequel to my self-published crime novel, War Games, set in Scotland and featuring psychic investigator and Falklands War veteran Glen Savage. I think it’s a good crime novel, but to send it out now would be a distraction. I had my fingers burned with a novel set in Warsaw in World War II and featuring a Polish detective forced to work for both the Nazis and the resistance and operating under the constant threat of death or betrayal. I think it’s as good as anything I’ve written and editors were very flattering about it, but sadly, in the long run, the publishing world wasn’t interested.

The most important piece of advice anyone with aspirations to become a full-time writer should be given is: ‘Before you put down a word understand how the publishing world works.’ It’s not just the potential pitfalls and disappointments along the way they should be aware of, but the arcane financial system. Your net share of that beautiful hardback that claims to retail at £18.99 is quite likely to be only a few pence after it’s discounted and your agent takes his piece, and the chances are you’ll only sell a couple of thousand at most. In a world of falling advances and short windows of opportunity your chances of becoming rich as a writer are about as good as they are of winning Euromillions. My late dad advised me not to give up the day job. It was excellent advice, that I ignored. Financially I would have been much better off, but I’ve had nine years of writing freedom and the chances are the day job wouldn’t exist now anyway.

What is your favourite thing about the whole writing process?

Having the privilege of seeing a character grow from being nothing more than a name into a living, breathing human being with a past and feelings and emotions, and the potential to affect the flow of future books. The best example I can think of is Serpentius in my Valerius books. A worn out gladiator destined for death in the arena, he appeared from nowhere in Defender of Rome at a training session where he was chosen to test out my hero’s skills. Over the next few books he became a key part of the narrative and the perfect, sullen, dangerous foil for Valerius, before going on to share top billing in Saviour of Rome, set in his native Asturia.

Was there a particular book that made you sit up and think that’s it, I’m going to be an author too?

As a voracious reader since childhood I’ve had any number of literary heroes over the years. The book that really inspired me to write was Kidnapped by Robert Louis Stevenson. It’s a fantastic adventure story with brilliant characterisation. The way the roles of David Balfour and Alan Breck Stewart evolve over the course of the narrative, with the Jacobite Stewart beginning as a swashbuckling, garrulous  leader only to end up relying on the calm, measured approach of Balfour to save his life, is entrancing. The writing is sharp and concise and it also has some of the finest descriptions of Scotland’s countryside and people in any book.

Who do you envisage as playing your characters if your book was ever turned into a movie?

That’s always a tough question. Someone in the Mark Strong or Jason Isaacs mould would be a good fit for Serpentius, the greatest gladiator of his day. Valerius begins the series as a tribune in his twenties and ends it in his mid-forties, so perhaps a younger actor who ages well. Tom Hardy or Kit Harrington would be perfect.

What do you consider is your greatest accomplishment?

Helping produce three wonderful children and being able to watch them blossom into wonderful adults.

Huge thanks again for joining me, Douglas! I too think Tom Hardy and Kit Harrington would make fantastic Valerius’s!

The latest book in Douglas’s series, Hammer of Rome, is out now! Here’s the blurb …

AD 80 Gaius Valerius Verrens is back where he belongs, at the head of a legion. But this is no ordinary legion. His command is the ‘unlucky’ Ninth, tainted by four decades of ill fortune and poor leadership. A unit regarded as expendable by Valerius’s superior, Gnaeus Julius Agricola, governor of Britannia.
Yet all that can be swept aside by a single moment of glory, and the long heralded invasion of the north of the province provides the perfect opportunity. Valerius leads his men to a devastating victory against the recalcitrant Brigantes, infuriating Agricola in the process. Soon, even greater honours beckon with the death of Emperor Vespasian and the succession of Valerius’s friend, Titus.
But, back in Rome, the new emperor faces his own challenges, not least from his own brother, Domitian, a man with an insatiable ambition for power and a deadly hatred of Valerius.
All Valerius can do is forget the great prizes on offer, concentrate on defeating the savage tribes who lie in the path of the Ninth, and ignore Agricola’s intrigues.
But watching his every move is the most formidable enemy he has ever faced: mighty Calgacus, war chief of the Northern alliance. 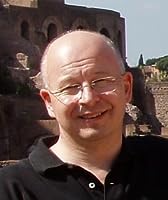 Douglas Jackson is the author of the successful historical novels Caligula and Claudius and my next book Hero of Rome, the first of a new trilogy, will be published in July 2010. I was born in Jedburgh in the Scottish Borders in the summer of 1956. Educated at Parkside Primary School and Jedburgh Grammar School, I left three weeks before my 16th birthday with six O levels and no idea what I was going to do with the rest of my life. Luckily, a friend worked in the local employment office and got me a place on a Youth Opportunities Scheme. It turned out to be restoring a Roman marching camp at Pennymuir in the Cheviot Hills and I had a wonderful summer turning turf and dreaming of Romans. Later I joined my local paper and for the next 36 years worked in local and national newspapers in Scotland, including the Daily Record and the Scotsman. I left the Scotsman after nine years as assistant editor in the summer of 2009 to become a full-time writer.

Get in touch or become a fan on my Facebook page http://www.facebook.com/pages/Doug-Jackson-author/245467143762?ref=nf

Or read my blog about the highs and lows of becoming a published author on http://dougsbookblog.blogspot.com