I’m on the blog tour for Arlette’s Story today and I’m delighted to be joined by author, Angela Barton, as she shines the spotlight on her character.

So, Angela, can you introduce us to Arlette please?

Arlette Blaise is a twenty-year-old daughter of a rural farmer in France. Her chores include the care of the family’s chickens, cows, vegetable gardens, and also the housework and cooking duties. She also has her own small business of keeping silkworms in a spare bedroom. She feels as if she’s doing her bit towards the war effort by selling cocoons to silk-spinners – the product eventually becoming parachutes for French soldiers. She is single and lives with her father and older brother at the farmhouse. Her mother died in childbirth many years earlier and her father didn’t remarry. During my story, her maternal grandmother comes to stay and helps out at the farm because Arlette’s brother leaves to join the Resistance.

When did you create Arlette?

I needed to create an unassuming, essentially ordinary protagonist, who would be faced with extraordinary circumstances. I was going to give her a rough ride in my storyline and she needed room to grow as a character. I placed her in a farm setting because agriculture was the principle economy during the war years in France. The Germans also targeted farms to forcibly requisition crops and livestock to feed the enemy, so I needed her to be in a vulnerable position. Gosh, I’m feeling very guilty of my treatment of poor Arlette, but thankfully, as well as feeling the reverberations of war she also builds friendships, laughs, falls in love, enjoys family life and lives her life positively despite challenges being placed in her way.

I definitely created the character of Arlette to accommodate the book. Having visited the ruined town of Oradour-sur-Glane in France, I knew I wanted to tell the story from a survivor’s viewpoint, so my protagonist had to be young and strong in order to survive the massacre that occurred there on 10th June 1944. I knew there would be a romantic thread running throughout the storyline, so it was obvious to me that there had to be a female lead character. (Haha! I know little of men’s thought processes!)

I like Arlette’s openness and willingness to embrace a situation. She a kind and loving daughter, sister, and friend. Arlette’s resourceful, having stepped into her late mother’s role as a homemaker from the early age of ten. She’s loyal and loving to her family. She’s empathetic, courageous, and compassionate.

Arlette can be stubborn. On two occasions in my story she creates set ideas in her head that aren’t the most practical, in fact, they can be unintentionally hurtful to others. It takes time and conversation with loved ones to make her recognise that it isn’t a weakness to change your mind.

I’m delighted to say that I have never been asked to change Arlette’s character or her actions. However, my very talented editor, Jane Eastgate, suggested that I needed to increase the build-up of her relationship with Saul, the book’s hero, with looks and deeds. (Why am I imagining a wink, wink, nudge, nudge moment?)

That’s a great question. I think if I were to choose a person Arlette was most similar to, it would be my daughter, Rosanna. She is loyal, kind, hardworking, generous and has a heart as big as a planet. Although a little older than my protagonist, my daughter has also faced challenges she’s had to overcome and has done that by finding the same inner strength that Arlette had to. Over time, they’ve both learned to believe in themselves.

That’s a difficult one because I don’t want to give the end of my story away! I’ve written an epilogue that takes place three years after the war has ended. Needless to say, I feel very close to Arlette, so I wouldn’t want to see her unhappy in the future. I sincerely hope that my readers are satisfied with the ending of Arlette’s Story.

Despite the age difference I’m certain we would be friends if she were a real person. We share the same values. I trust and respect her. I care what happens to her and want her to have her happily ever after. We grew very close during the writing of Arlette’s Story and when I finished the novel, I missed her.

Ah, I’ve heard of lots of author’s going through the same emotions when they’ve finished a book!

I love the sound of Arlette and her story, if you’d like to find out more, here’s the blurb … 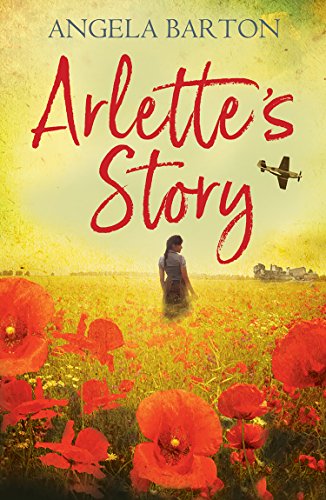 An emotional and beautifully written debut you will not want to put down.

One woman’s struggle to fight back against the enemy in order to protect the ones she loves.
When Arlette Blaise sees a German plane fly over the family farm in 1940, she’s comforted by the fact that the occupying forces are far away in the north of the country. Surely the war will not reach her family in the idyllic French countryside near to the small town of Oradour-sur-Glane?

But then Saul Epstein, a young Jewish man driven from his home by the Nazis, arrives at the farm and Arlette begins to realise that her peaceful existence might be gone for good …

Huge thanks to Angela for joining me and to Rachel at Rachel’s Random Resources for my stop on the tour!

Angela Barton was born in London and grew up in Nottingham. She is married with three grown up children. Passionate about writing both contemporary and historical fiction, Angela loves researching for her books and is an avid reader. Having signed publishing contracts for three of her completed novels with Ruby Fiction, Angela is excited to be working alongside such a friendly and supportive publishing team. She is a member of the Romantic Novelists’ Association and Nottingham Writers’ Studio.

Having recently moved to France, Angela (alongside her husband, Paul) is now a lavender farmer, creating products from the oil that’s distilled. Angela says she’s looking forward to spending more time writing in the company of her two spaniels while sitting on her veranda overlooking the breath-taking countryside of Charente.