Huge congratulations on winning your Chill Award, John! You must be so happy that your work has been recognised in this way, what inspired you to write this story?

Well, it may sound slightly flippant, but taking a pee in the bushes beside the road was where I got the idea!! I was standing there thinking, rather macabrely, “What if I saw a hand…”

It means a great deal, because I probably speak for most indie-authors when I say that any publicity is appreciated, but the Chill Award indicates that the work is of some value.

I have nine other books in circulation, five memoir books and four more novels. probably best if readers go and take a look at my web site.

Well, I haven’t begun work on it yet, but I do have a germ of an idea. It is about an old Greek lady, on her deathbed in the UK, after having lived there for decades, telling her nephew her life story. It will contain a few surprises for him and the reader. I have a lot of research to do though as of yet.

I read incessantly, plus during the summer season I work part-time as an excursion escort (I live on Rhodes). It’s the perfect ‘job’ for a people-person who likes to talk a lot! My wife and I also tend a large garden and go for long walks, more so during the winter months. We also have a kind of ‘spiritual’ side to our lives, although we don’t like mainstream religion at all. It’s a kind of voluntary educational work we’re involved in. That’s all I’ll say on that subject!

Well, my memoir books were unashamedly inspired by Bill Bryson. My novels, well, I just write one if a plot comes to me. It’s as simple as that. I wouldn’t say my novels fit into particular genre, except to say that they usually involve personal stories, relationships, consequences, that sort of thing.

TBH, I quite fancy having a stab at fantasy (Lord of the Ringsy stuff), but I don’t think I’ll ever be good enough.

Tea or coffee? – Earl Grey, please! But then I do like Freddo espresso and Frappé.

Marvel or DC? – Neither

Early riser or sleep in? – I was always an early riser, until I became an insomniac. Now I sleep in out of necessity when I can.

Pj’s or ‘normal’ clothes when writing? – If anything at all, pants! (But not as in how the Americans understand that!)

Book or kindle? – Always a book in bed. Kindle when travelling.

And finally, … What is your favourite book of all time? – That’s such a hard one. Maybe The Magus by John Fowles. But then again…

Please add links to your sites and social media so that we can find you.

Two in the Bush is out now, here’s the blurb … 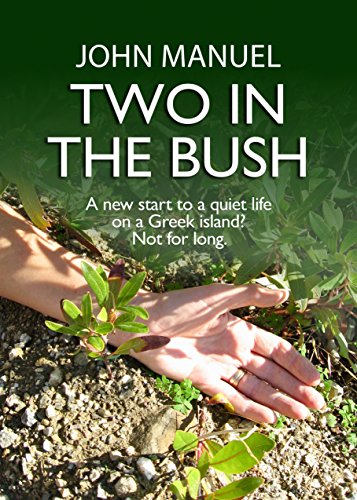 Adrian Dando has a good marriage, and a steady, if somewhat pedestrian life in the West of England. Without warning it all goes horribly wrong and he is left alone and bereft.

Having two friends who have already moved out to Greece, he decides, with their encouragement, to do likewise. After all, a new start, a new life, new experiences, all of these should enable him to kick-start his life again, maybe even bring him some degree of happiness.

A ‘chance’ discovery of a woman’s body in a quiet location not far from his home starts a chain of events that just may turn his idyll into a nightmare.

But is everything as it seems? With a plot that twists like series of old olive branches, “Two in the Bush” carries enough surprises to keep you wondering to the last page.

John Manuel has lived on Rhodes since 2005. He met and married a half-Greek girl in his home town of Bath, UK during the 1970’s and soon developed a love for his mother-in-law’s country. The four “Ramblings From Rhodes” books are personal, episodic accounts of all kinds of people, places and things that he’s encountered and experienced in every corner of Greece, although the last two, “Tzatziki For You to Say” and “A Plethora of Posts” are mainly about daily life year-round on Rhodes. John’s blog all about life on Rhodes is here: http://ramblingsfromrhodes.blogspot.com

Regarding his “memoir” books he says:
“I don’t largely tell a chronological story. Don’t read my ‘Ramblings’, expecting a thriller, a storyline, a novel or a moral. Read them to perhaps have a chuckle, or a brief virtual visit to all sorts of places in Greece.

I prefer my travel reading to connect to living people, to impart feelings and interaction among human beings as they encounter one another, often unexpectedly, yet the result being a new friendship formed, a new thing learned, a new experience gained.”

The most recent non-fiction book from John is “A Jay in the Jacaranda Tree”, a no-holds-barred look at over ten years of living in Greece during an extremely unstable period in her economic history.

John has also written five novels, of which the latest is the well-received “Two in the Bush”.

He also runs a reading group on Facebook called “A Good Greek Read” for all lovers of things Greek.