I’m a British author living in the Chiltern Hills with my husband and cat. I suffer from ME which I’ve had for a very long time. It’s only in the last few years I’ve been well enough to even consider writing. Even now, it is exhausting and painful, but I’ve found something I love doing and have no intention of stopping just yet. I have a slightly quirky sense of humour which does tend to find its way into my books.

To be honest – I have no idea. I’ve always loved history and time travel but this book was supposed to be about Marion meeting Robin Hood and his Marion. Neither of them showed up but thankfully, Giles and Prince John did.

I’m over the moon! Delirious with delight.

I’ve published the second book in the series, A Promise to Keep where one of Marion’s daughters takes a trip back into 1197. Poor Abbess Hildegarde was expecting a visit from Giles de Soutenay – not a young woman from the 21st century. And things don’t go according to plan – as is so often the way.

Those were my first foray into historical fiction. Before that, I tended towards short contemporary stories and poetry. I had decided I would never write historical fiction as I didn’t think I could do it – life is full of surprises.

Yes, I’m working on book three in the Out of Time series. The date is actually set between books 1 and 2 at the end of 1194 – that’s what happens when you’re a pantster. Isabella le Gris has been married once at fourteen. Newly widowed, she’s distraught when she’s told she must marry again but she has no option. She will do it, but her father and her first husband have given her no reason to believe any man can be trusted. She will do her duty, no more.

Giles de Soutenay was hoping for a warm, loving relationship and nearly despairs when Queen Eleanor tells him he is to be betrothed to Isabella, who is as chilly as an effigy. Blossom on the Thorn is their story is their story. It’s my first romance, and I’ve really enjoyed writing it. It’s due to be published next month if all goes according to plan.

Walking with my husband in the beautiful Chiltern Hills. I can’t walk as far as I’d like because of my health problems but I’m up to two miles now which makes me really happy.

I always said I would never write historical fiction as I didn’t think I’d be any good at it, so it seems the genre chose me.

Early riser or sleep in? Sleep in – blame the ME

Book or kindle? Both

Pineapple on pizza – yes or no? Always yes!

And finally, … What is your favourite book of all time? Sharon K Penman’s Here be Dragons.

You can keep up with all Loretta’s news on the following social media platforms:

Out of Time is out now, here’s the blurb … 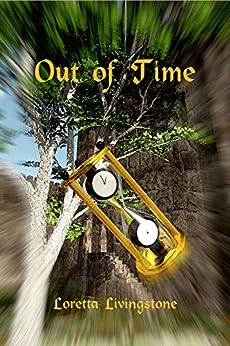 1191: Giles de Soutenay has never liked or trusted John, Count of Mortain, but when John is taken seriously ill, it falls to Giles to ensure his survival.

2006: Marion Hart, visiting the ruined Abbey of Sparnstow, could never have imagined she would be called upon to help save one of the most dangerous men of the twelfth and thirteenth centuries. Falling through a gap in time, she finds herself administering first aid to John, inadvertently endangering both herself and Giles.

Book #1 of the Out of Time series – a time travel story, set in medieval England.

Loretta Livingstone is a British author, who lives with her husband in a beautiful area of the Chilterns. She writes fiction and poetry collections.

Her first foray into the world of fiction was her novelette, Where Angels Tread – a story about a young homeless girl. More fiction is following fast.

Loretta has recently published A Promise to Keep – the sequel to her first historical/timeslip novel, Out of Time, which was short-listed for the 2016 HNS Indie Award, and she’s now working on book 3 in the series, Blossom on the Thorn, although she admits to getting slightly distracted by ideas for books 4, 5 and 6.

Loretta says of her work, “Above all, I want to leave my readers with smiles on their faces.”