The number thirteen may be unlucky for some but I’ll bet it’s the number that puts Cavanagh firmly in the ranks of the top crime/legal thriller writers EVER!

I’m lost for words … seriously … don’t know where to start with this review. Thirteen by Steve Cavanagh is by far one of the BEST books I have EVER had the pleasure of reading (well, listening to as I got the Audible version but you know what I mean!)

It is thrilling, gripping, dark, and twisty. It is everything a thriller should be and more. It is AMAZING!!!!

In case you’ve been under a rock for the last few months, here’s the blurb … 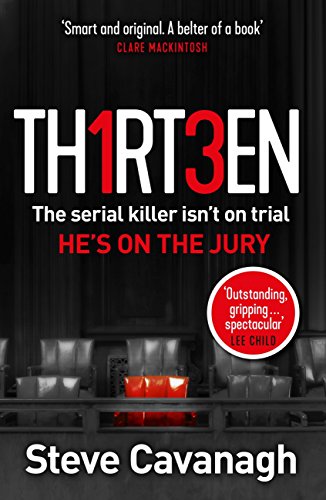 THE SERIAL KILLER ISN’T ON TRIAL.
HE’S ON THE JURY…

‘To your knowledge, is there anything that would preclude you from serving on this jury?’

Murder wasn’t the hard part. It was just the start of the game.

Joshua Kane has been preparing for this moment his whole life. He’s done it before. But this is the big one.
This is the murder trial of the century. And Kane has killed to get the best seat in the house.
But there’s someone on his tail. Someone who suspects that the killer isn’t the man on trial.
Kane knows time is running out – he just needs to get to the conviction without being discovered.

I can’t remember being so utterly absorbed in a book from page one, and I’ve read some belting books in my lifetime!

When Eddie Flynn is asked to be second chair on the biggest murder trial since OJ Simpson, he is wary at first but soon starts to think that the job prospects the case will offer him after will be of huge benefit, so he takes the job. And when he does, things start to happen to make him think that all is not as it seems.
In typical thriller style we know from the off who has done what to who, what we don’t know is the why, the how, or the outcome. And let me tell you, the journey that Cavanagh takes us on to get to the truth, well … its frigging awesome!!!

I was completely hooked from the off. Once I started there was no stopping and had I been reading this, it would have been a one-sitting read. As it was I listened and cleaned, and walked the dog, and cleaned some more, then walked the dog some more just so I could keep listening!

Cavanagh has created a masterpiece of the courtroom thriller. It is utter perfection. From the character development, the plot twists and turns, the pace, the narrator, the interaction between the characters, the point of view … everything is as it should be for this genre … it is intelligent and sleek, gripping and thrilling, it will make your heart pound, your breath catch, and your jaw will drop – quite a few times! And if you’re anything like me when listening to a book and you have to do something, your house will be immaculate!!!

I adore Cavanagh’s style of writing, there is something special about it, something that captures your imagination and holds you tight from the first page until the last. I was addicted. Totally. To the point I’m very tempted to listen to it all over again. IT IS THAT GOOD!!!! A complete #sleepstealer

And what a genius idea! Something original and fresh written in such a such a way that you’d think it could happen every day! Mr Cavanagh, sir, you are ACE!

Every character was thought-out to perfection, every word written was important, there was none of the page filler rubbish that isn’t needed, no characters that weren’t needed. This is how to write a courtroom drama/thriller.

Eddie Flynn is a character I want to know. He is superbly written, complex but simple, damaged but strong, and he will make you fall in love with him. He is intelligent and you know he knows his stuff, but there’s a vulnerability about him that draws you in to him and makes you pay attention to everything he says and does.

The book swaps chapters between Eddie and Kane in present and Kane in the past, Cavanagh does this effortlessly, there wasn’t a point in this where I didn’t know where I was in the timeline, the writing is that perfect.

I’ve been wanting to find an author who matches John Grisham in the courtroom and finally, Steve Cavanagh is here.

You need to get yourself a copy NOW, Bookworms! I used my Audible credit for my copy but you can grab yours over at Amazon:

Hugest thanks to the team at Orion for inviting me on tot he blog tour, I’m sharing today’s with Julia over at Juliapalooza.com so pop over and see what she thinks! And keep up with the rest of the tour:

Steve Cavanagh was born and raised in Belfast and is a practicing lawyer. He is married with two young children. The Defence was chosen as one of Amazon’s great debuts for 2015, as part of their Amazon Rising Stars programme. In 2015 Steve received the ACES award for Literature from the Northern Ireland Arts Council. The Defence was longlisted for the Crime Writer’s Association Ian Fleming Steel Dagger, and shortlisted for two Dead Good Readers Awards. His second novel, The Plea, won the Prix Polar Cognac for Best International novel. The Liar is the third book in the series, and the latest is Thirteen: The Serial Killer Isn’t On Trial, He’s On The Jury.
Steve writes fast-paced legal thrillers set in New York City featuring series character Eddie Flynn.
Find out more at http://www.stevecavanagh.com or follow Steve on Twitter @SSCav