While researching my family history I discovered four convict ancestors who had been buried literally and figuratively by subsequent generations. I was annoyed that their contributions to the new country that was to be Australia, were ignored. I decided that their voices deserved to be heard.

This is award is an amazing honour. It’s great to have one’s work validated by readers from other parts of the world.

This is my debut novel. It is the first in a series of 3 (although there may also be a prequel).

Yes, the second book in the series is called “Legacies, Lies, Love” and I’m working hard on it – mainly because my Australian readers are waiting…

I’m a retired secondary teacher, and sometimes wonder how I found time to go to work. I read, I write every day, I ride my bike every day (if the weather is too hot or too cold I write the exercise bike). I walk the dog every morning and take him to the park every afternoon for a game with his ball. He will do anything for that ball!!! I have four granddaughters that I help with, and I am a qualified genealogist so spend some time researching.

That’s a tough one. When I was a lot younger I wrote science fiction, but the enthusiasm for writing that genre has long gone. General fiction probably.

Marmite – yes or no? NO we don’t have Marmite in Australia – it’s Vegemite.

Marvel or DC? Either – I’m not fussy. A distant relative of mine- Johnston McCulley (Zorro et al) is often considered the “father” of the superhero.

Early riser or sleep in? Depends on the weather and what the day has in store.

Pj’s or ‘normal’ clothes when writing? Either – if I’m at my desk, it’s normal clothes – if I’ve got the laptop in bed, obviously PJs.

Pineapple on pizza – yes or no? Yep

I don’t really have one. I read such an array of authors. A movie, I can answer, Galaxy Quest, but not a book.

You can keep up with all Janeen’s news on the following social media platforms:

No Room For Regret is out now, here’s the blurb … 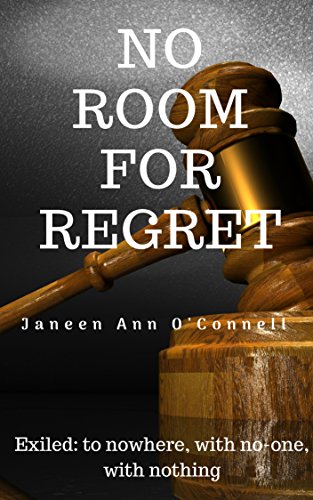 February 1811
Consumed with loathing, 18-year-old James Tedder regretted trusting the 70-year-old diamond merchant. Chained below deck he listened to the sobs and wails of fellow prisoners. Putting his hand over his nose to filter the vile smells of sea sickness and bodily excrement, James wondered how his life on the other side of the world could ever be worth living.
Will he survive?

Paralysed with regret, James Blay rued his decision to sell the stolen boots. It was almost fatal. His death sentence, commuted to life in a place no one knew anything about, was little comfort. His wife and sons were left in London to fend for themselves.
Will he ever see them again?

May 1812
Sarah Blay watched the convict ship “Indefatigable” as it began its voyage to the other side of the world. Her shoemaker husband James and his friend James Tedder were on board. One year later Sarah bundled up her three small sons and said a final goodbye to her mother. She boarded the HMS Kangaroo, and followed her husband to Van Diemen’s Land.
Will Sarah regret her decision?