I’m joined by Jackie Carreira today to talk about her recent Chill With A Book Award for her debut novel, Sleeping Through War.

Huge congratulations on winning your Chill Award! You must be so happy that your work has been recognised in this way what inspired you to write this story?

I’m always interested in the ‘extraordinary’ within the ordinary, and because of this I’m drawn to writing about so-called ‘normal’ people. The main characters in the book are all based on lots of people I met during my childhood – women I saw who struggled and scraped but always had a dignity about them that I admired. I grew up in London and Lisbon during the 1960s and 1970s in very working-class areas. The book tries to evoke those times and places, specifically 1968, when the world was changing at a furious rate but the lives of ordinary people were still a struggle. Really, it’s as much a history book as it is a novel – a history that isn’t usually written down because the ‘little’ people just don’t seem to make it in there. This is a small attempt to give those who were forgotten – women and men – a voice.

Sleeping Through War was only published in February and it’s my first novel. To be recognised so soon is absolutely amazing and a great confidence booster. But the best thing about this award is that the winners are selected by readers themselves and, let’s face it, the reason we write books is that we want people to read them (sounds obvious when you say it like that!). When a reader says: ‘yes, I like it’ that is the best a writer can wish for. It’s also extremely important to find individuals and organisations who are actively supporting and encouraging independent authors. It’s hard enough for any writer these days, but it’s especially hard when you don’t have a big company behind you. Things like ‘Chill With A Book’ give us little guys a chance to be noticed, and I’m extremely grateful.

I’ve mostly been a playwright for the last few years, and I’m co-founder of a theatre company in Suffolk with my husband, AJ Deane, called QuirkHouse Theatre. We focus on new writing (not just mine!), and some of my plays can be purchased online via Lazy Bee Scripts (lazybeescripts.co.uk). Two of my plays have been winners of the Kenneth Branagh Award for New Drama, and another was runner-up at the Brighton Fringe Audience Choice Awards. This is my first novel, but I plan on a few more.

Yes. Actually, I’m working on two at the same time. One is quite dark and philosophical, and the other I can only describe as a bit curious. At the moment, curious is winning!

Reading, of course; watching movies; playing in the theatre; playing music; playing with cats…I think maybe I play too much. Oh, and I really, really like asking questions. It drives some people crazy!

Margaret Atwood, Kurt Vonnegut and José Saramago. All authors that make me think and question the world around us and what it means to be human. If I could have 2 more, I would say Doris Lessing and John Steinbeck for the same reasons…and Tove Jansson!

Sleeping Through War is classed as Contemporary Fiction, and even sometimes Literary Fiction. These are both incredibly broad definitions and I’m not entirely sure what either of them mean. All I know is that I’m drawn to write about the so-called ‘ordinary’ people of this world, particularly the over-looked and under-rated. I try to find stories that aren’t being told and I really don’t mind how their categorised. If there was a ‘Mr & Mrs Brown’ genre, I think I’d be in there.

I’d love to have a go at writing Science Fiction, or some kind of crossover. I just have to learn quite a bit more about science first.

Coffee – and lots of it, as long as it’s ‘proper’ coffee!

DC – mostly because of Batman: The Killing Joke

That depends on how hungry the cat is.

‘Normal’ most of the time. Makes me feel like I’m working.

I plan and plan then realise the time and pants it!

Through The Looking Glass by Lewis Carroll.

You can keep up with Jackie’s news by following her on the following social media platforms:

If you’re an indie author and would like to know more about the Chill With A Book Awards, just click the link.

Sleeping Through War is out now, here’s the blurb … 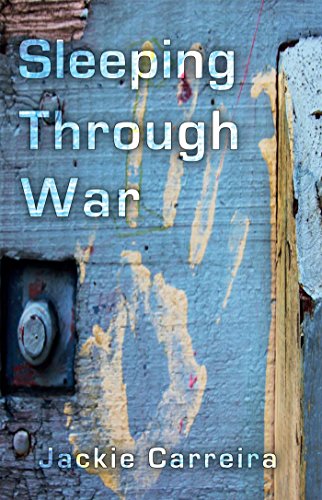 Set against the backdrop of real, world-changing events, these are the stories that are forgotten in the history books.

The year is 1968 and the world is changing forever. During the month of May, students are rioting and workers are striking across the globe, civil rights are being fought and died for, nuclear bombs are being tested, there are major conflicts on every continent, and war is raging in Vietnam. Against this volatile background, three women strive to keep everything together.

Rose must keep her dignity and compassion as a West Indian nurse in East London. Amalia must keep hoping that her son can escape their seedy life in Lisbon. And Mrs Johnson in Washington DC must keep writing to her son in Vietnam. She has no-one else to talk to. Three different women, three different countries, but all striving to survive – a courageous attitude that everybody can relate to.

Although Sleeping Through War is a work of fiction, this somewhat hidden history attempts to humanise a few weeks in time that were so stuffed with monumental events that it’s easy to forget the people involved. The author was a child in 1968 and lived in London and Lisbon during the 1960s. She met women like these and didn’t want their voices to go unheard into the future. Readers of both history and literary fiction will enjoy this emotionally-vivid work that weaves fiction into fact.