It’s my stop on the blog tour for Rose Zolock’s Medium Wave today and I’m delighted to be handing over to her main character, Becky Moran!

Character blog. Medium Wave’s main protagonist is Becky Moran. It’s her paranormal journey – from her radio studio to a battle for her very survival which forms Book One of this series. Here, Becky Moran introduces herself…

My name is Becky Moran. I can hear the dead speak.

I built a career claiming I was a Medium, but I was lying.

Come closer, that’s it, make yourself comfortable. Don’t be wary – if I sense anyone trying to contact me, I have worked out how to shut them out. You may want to ask me how that works – or if I am cursed or blessed with this so called ‘gift’. The answer to that second question is that I am learning how to control the dead when they speak to me. Most of the time. I sense the entities, they sense me and they come, lined up like spectral soldiers, patiently waiting for their turn to pass on their messages. There is a darker side, darker entities and they are not patient. They frighten me.

I built my career pretending to hear the dead and convincing you absolutely that I could hear them speak. When that became a reality, the enormous responsibility of that ability, and how it impacts the living, made me feel ashamed of turning this into a circus act. I assure you all that has changed.  It is no longer an act.

I have a weekly radio show, Medium Wave, where I interview those who claim paranormal abilities, or they come in to show me objects they claim have a supernatural history. A man who claimed to be psychic spy for the CIA told me he had seen The Arc of The Covenant and knew where to find it. Many say they have psychic abilities. The UFO brigade will talk of abduction, grey aliens in bedrooms, being beamed up through ceilings or they will show me pictures of unexplained animal mutilations. One carried a small speck of metal – an unknown substance on this planet, he told me – which had been removed from his body by surgery and he claimed it was the way the extra-terrestrials had been controlling him. It looked like a mouldy pea to me.

On air, it is my job to question any claims of the paranormal or supernatural, to challenge the story teller so we can all make up our own minds if what they believe is true. Before something supernatural and evil broke through in my radio studio, live on air, and changed everything I will admit my starting point was always that they were all deluded. Fascinating, often, compulsive to listen to, feeding an unregulated machine with fanciful stories which may, or may not give comfort to an eager audience who want some sign there is another dimension to exist in after death.

I can tell you there is. That eternal battle between good and evil, benign and horrific is as real as the chair you are sitting on and the air you breathe.

You must make up your own mind. Before you go, let me tell you a story. This was told to me by a man who called himself Mr Henderson. He claimed that as a child, he had seen a dark figure at the top of the staircase in his family home. He was eight years old. The figure was a strange shape, shadowy with what looked like a hooded cowl, but the face was pointed in the shape of a beak. He had screamed and his parents had been shaken, and spent some time trying to calm him down. Strange things happened in that suburban home. Footsteps, noises, toys starting themselves up in unison with a cacophony of electric noise. The house had been built on a plague pit and the shape Mr Henderson saw was that of the plague Doctor, with a pointed, rudimentary gas mask on his face – the man who, in times past, pushed the barrow and cried ‘Bring out your dead’. The family moved. Years later, Mr Henderson – now married with children of his own and living in another city, came home one evening to find his wife and two children, hiding in a cupboard. They too had seen the spectral plague doctor – and as they described the dark shape which had stood at the top of the staircase, Mr Henderson felt physically sick with recognition. The family knew nothing of his childhood terrors. Then the telephone rang. Hardly daring to pick up the phone, Mr Henderson brought the receiver to his ear. As they broke the news of the death of his parents in a car crash, Mr Henderson looked up towards the top of the stair case. He saw that dark shape, with the pointed beak. He could have sworn it was pointing at him.

See you next time on Medium Wave…

Huge thanks for joining me today, Becky! It’s been great getting to know you. And massive thanks to the author and Rachel over at Rachel’s Random Resources for my spot on the tour.

Want to find out more about Becky? Of course, you do!! Here’s the blurb … 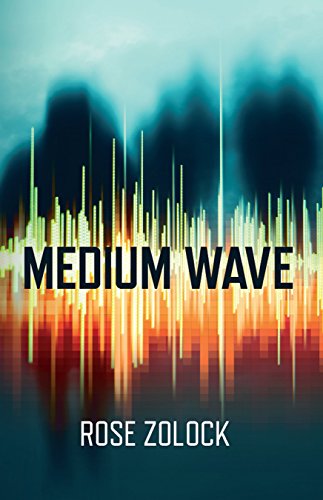 Becky Moran has built a career claiming to talk to the dead. A successful clairvoyant medium, a Cambridge graduate with her own radio show ‘Medium Wave’ and a team dedicated to crafting the celebrity myth – because Becky Moran is a fake. Until, one night, something supernatural, inexplicable, breaks through live on air as she is broadcasting. Becky Moran discovers the paranormal is real, the dead can indeed speak and she is being pursued relentlessly towards a battle for her very survival.

‘This thing has no defined shape. Whatever energy exists within it, it cannot settle on a shape. The strands of darkness curl out and then wrap back inwards. The bulk of the shadow becomes concave, then bulbous, the height building in on itself but lacking any skeletal structure to wrap itself around. There are no eyes, no clearly defined head shape. It is creating itself from darkness, like a swirl of ebony ink dropped into a vat of putrid water, spreading silently….’

You can get your copy over at:

Her Irish grandmother first told Rose about the Banshee when she was just a small child. How the wailing sound of the spirit of the dead and dying could be heard when someone was about to pass.

It was family folklore that the women in the family had ‘the touch’, the ability to see spirits and other dimensions. Rose listened and grew up fascinated by those who claimed to have supernatural or psychic abilities.

Rose does not claim to have those powers. Take her to Venice in February when the mist swirls over the canals, walk by her side along the darkened streets of Greenwich Village in New York City in high summer, listening to a ghost walk tour guide tell the stories of death, murder and the unexplained – Rose would say those stories and our belief in them gives her a power to see into the shadows within our imagination.

As a journalist, Rose takes every opportunity to explore and investigate strange stories, myth and folklore. Living in rural Yorkshire, with a rich library of ghost stories and literary tradition, Rose also has a sceptical and forensic insight into those who peddle the stories which feed our imagination but of which we have yet found no proof. She has listened to the debunkers who argue against those believers who are convinced that sand the dark side exist.

Rose’s mind is open. Is yours?