So, thanks to technology being the wonderful thing that it is, this awesome guest post by Kristen Lindsay Hager didn’t go live at the weekend, my apologies!!!

Anyway, Can Dreams Come True? is the first book in her new Cecily Taylor series and the character herself is joining me to talk about some of her favourite things!

In Can Dreams Comes True?, my character Cecily Taylor Damone loves to escape with both books and music. I put myself in her shoes as I was creating her character and I listened to music and read books I thought she would be interested in so I could immerse myself into her world even more. Here are a few of the albums/songs and books I think she’d love.

Favorite songs/albums:
The Weekend’s My Dear Melancholy: An album about breakups and relationship pain? Totally something Andrew would record and Cecily would play non-stop.

Ed Sheeran’s Divide & X albums: Ed’s music reminds me of what Andrew’s would be like, so Cecily would play this one non-stop with ‘Perfect’, ‘Shape of You’, and ‘Castle on the Hill’ on repeat. ‘Castle on the Hill’ is a very Andrew song—although so is, Don’t, from the album.

Kesha’s ‘Praying’: Cecily would listen to this one late at night when she was struggling to have her voice be heard.

George Michael’s Faith album: This album has loneliness as a theme and reminded me of the kind of music Andrew would write and sing. ‘One More Try’ in particular is a very Andrew song. And I think he’s write a song like ‘Faith’, but he’d do more of an acoustic version of it. Andrew is very into older music and he’d definitely introduce her to this album.

Perfect You by Elizabeth Scott. Cecily would love this book about teen love and friend issues.

Grace Unplugged by Melody Carlson. Cecily would like seeing the realistic side of a singer’s life and watching Grace deal with holding onto her values, while stepping into the spotlight.

Just Listen by Sarah Dessen. Cecily would really get into this amazing novel about a character holding in her emotions and she deals with trying to find her own voice, dealing with pain, and using music to help her.

The Great Gatsby by F. Scott Fitzgerald. Cecily’s high school assistant principal suggests she read this book and she finds a documentary he gives her happens to be one of Andrew’s favourites as he identifies with Fitzgerald.

What a fantastic selection of books and songs! Please accept my apologies that it’s a little late, Krysten and blog tour organiser, Jenny from Neverland Blog Tours!

If you’d like to find more out about Cecily, Can Dreams Come True? is out now! Here’s the blurb …

Cecily has always had a huge crush on singer Andrew Holiday and she wants to be an actress, so she tags along when her friend auditions for his new video. However, the director isn’t looking for an actress, but rather the girl next door—and so is Andrew. Cecily gets a part in the video and all of Andrew’s attention on the set. Her friend begins to see red and Cecily’s boyfriend is seeing green—as in major jealousy. A misunderstanding leaves Cecily and her boyfriend on the outs and Andrew hopes to pick up the pieces as he’s looking for someone more stable in his life than the models he’s dated. Soon Cecily begins to realize Andrew understands her more than her small-town boyfriend—but can her perfect love match really be her favorite rock star? 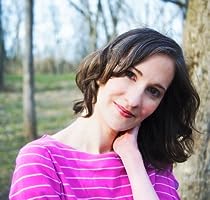 Who knew all those embarrassing, cringe-y moments in middle school and high school could turn into a career? And who would have thought that daydreaming in math class would pay off down the road?

She is the author of True Colors, Best Friends…Forever?, Next Door to a Star, Landry in Like, Competing with the Star, Dating the It Guy, and Can Dreams Come True. True Colors, won the Readers Favorite award for best preteen book and the Dayton Book Expo Bestseller Award for childen/teens. Competing with the Star is a Readers’ Favorite Book Award Finalist. Krysten’s work has been featured in USA Today, The Flint Journal, the Grand Haven Tribune, the Beavercreek Current, the Bellbrook Times, Springfield News-Sun, Grand Blanc View, Dayton Daily News and on Living Dayton.