Her Greatest Mistake, the debut novel by Sarah Simpson, is one of those books that keeps you on edge from start to finish. Uncomfortable, realistic, and captivating, this psychological thriller will have you on the edge of your seat and keep you turning the pages. 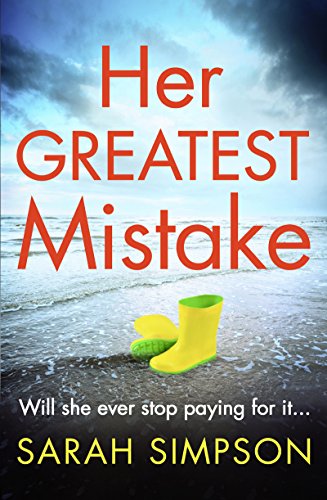 DO WE EVER KNOW WHAT GOES ON BEHIND CLOSED DOORS?

Eve and Gregg were the perfect couple, with the perfect marriage… which has become the perfect lie. Gone is the charming, attentive Gregg – instead Eve wakes up each morning beside a manipulative and sinister man who controls his wife’s every move.

So Eve flees her immaculate marital home to keep herself, and young son Jack safe. Yet no matter how careful she has been, she knows Gregg will be relentless in his pursuit of his missing family. And that one day, when she’s least expecting it, he will find them…

What was Eve’s greatest mistake?

Marrying Gregg? Leaving him? Or leaving him alive…?

HER GREATEST MISTAKE is the gripping debut which will keep you guessing until the very last page. B.A. Paris meets Liane Moriarty in this electrifying thriller.

‘Dark and twisty; devious and taut. An amazing debut that will keep you from sleep and in suspense!!!’ DIANE JEFFREY.

Eva is such a wonderfully real character.

Regular readers of my reviews will know how much I love a book which follows the now and then format and Simpson pulls this off to perfection. Told from Eve’s point of view, we flash back and forth between the years between Eve meeting her ex, Gregg and the now, when she and her son, Jack, have escaped to Cornwall.

Eve is convinced that Gregg has found them. Things take a sinister turn and the narrative really pulls you in to Eve’s mind, so much so I found myself on edge the whole way through.

Simpson’s writing is crisp, thrilling, and compelling, it’s hard to believe this is her debut! The dark and twisty turns the plot takes will have you reading from behind a cushion, seriously, it’s sinister and scary and haunting.

Simpson is definitely on my one to watch list – this woman has serious talent and I can’t wait to see what she has in store for us next!

Hugest of thanks to the author and Aria Fiction for my stop on the tour! What a belter of a debut!

Sarah  Simpson  has  a  first-class  honours  degree  in  Psychology and  has  worked  in  a neuro-psychology  department  at  a  Brain  Rehabilitation  Hospital.  When  she  first graduated  she  formed  a  mental  health  consultancy  and  worked  as  a  psychologist within  the  family  court  system  of  Warwickshire  and  Oxfordshire.  Three  years  ago  she moved  to Cornwall  with  her  husband  and  three  children,  and runs  her  own  practice in  Truro.

Her  Greatest  Mistake is  her  first  novel,  and  she  is  currently  working  on the second.