It’s my stop on the blog tour for Summer in a Cornish Cove by Kate Ryder today and I have a great extract to share with you. 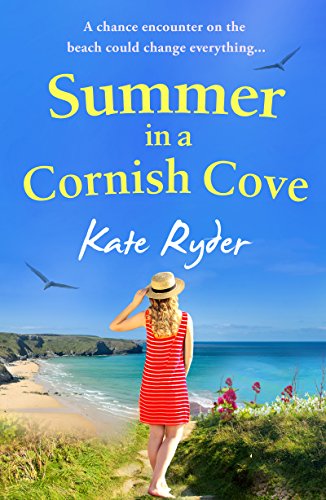 Set against a gloriously rugged Cornish backdrop, two lives are about to be changed for ever… The book to fall in love with this summer – perfect for fans of Fern Britton, Liz Fenwick and Veronica Henry.

Oliver Foxley is an acclaimed movie star and global heartthrob. But under the glare of the spotlight his ‘perfect’ life – and marriage – is slowly starting to crumble.

Cara Penhaligon is a struggling young Cornish artist, and widowed mother of two children. Life has been unbearably harsh to Cara, but meeting Oliver might just give her a second chance at the happiness she deserves. As each begins to heal the other, the pieces of Oliver’s frustrating jigsaw puzzle effortlessly fall into place. But as the Cornish summer draws to a close, Oliver faces the toughest of choices, and no one emerges quite as they were at the start.

Previously published as Cry of the Gulls.

As Cara gazes along the empty expanse of sand, she notices a vehicle pull up in the café’s car park at the far end. A man gets out, swiftly followed by a springer spaniel.

Must be mad to be out in this!

She watches the man zip up his jacket and pause to look out to sea before walking down the steps onto the sand, his body bent into the wind. The dog is already on the beach, racing up to the water’s edge and barking at the waves.

‘Six should be fine. I’ll do supper for the kids so you won’t have to bother.’

‘Don’t worry about that, Cara. I’ll rustle up Grandma’s special. I’ll even drag Grandpa out too and we can all spend some quality time together.’

‘Thanks.’ Knowing her mother is itching to discover who she’s going out with, Cara holds her breath waiting for the inevitable question and is surprised when it doesn’t come. ‘Where’s Dad’s exhibition?’ she asks.

‘Eden. He’s giving daily lectures as well so it’s not as if he can just hang the pieces and leave!’

‘But that’s brilliant! There’ll be other fiestas, Mum.’

Carol laughs. ‘Hey, who is the mother here?’

‘Me too, don’t forget! But I don’t like to think you feel you’re missing out.’

‘Never! But I would have liked to go to that fiesta,’ Carol says with some regret. ‘Anyway, Cara, I’m so pleased you’re giving yourself a night off.’

A sudden rain squall thrashes against the window panes, rattling the wooden frames. As the wind picks up, swirling under the eaves of the studio, an eerie sound like wailing women fills the air. Cara shivers. It’s cold, even with the heating on. Glancing up, she notices a stain spreading across the ceiling.

Looking out at the turbulent sea, she sees white horses riding the crest of the waves. She never tires of this view, at any time of year. Every season has its merits. Even in January, when everything appears colourless and drab, the sweep of the bay is magical to her. She smiles at the memory of the first time she saw The Lookout. He was so unsure and worried she wouldn’t like it. But she loved everything about it – from its quirky, unusual layout and dilapidated air, as if yearning for someone to care again, to the wildness of the surrounding cliff garden. Where others only saw its dangers, perilously perched above the beach, she saw the cliffs rising steeply behind as mighty protectors providing shelter from the bitter north-easterlies.

Cara’s eyes follow the man who, undeterred by the weather, walks his dog along the beach. Behind him, the dark grey twist of road glistens in the rain, like a snake slithering through the countryside, making its way silently towards the sand before depositing visitors at the small car park serving the café. Her gaze follows the dirt track skirting the cove that gives access to the handful of properties hugging the cliffs. The Lookout is the last bungalow before the Atlantic and Cara likes the fact that its windows look out across the vast ocean towards Puerto Rico, some four thousand miles away. It is a relatively unknown cove and she likes that too, providing her with the privacy she needs to face her grief head-on and to find the strength to continue… for her little family.

Sighing deeply, she phones Ben. ‘All organised,’ Cara says, trying to muster some enthusiasm for the proposed outing.

‘Hey, Cara, that’s great! I’ll pick you up at seven.’ His excitement emanates through the ether and she removes the iPhone from her ear. ‘See you, babe.’

She watches the man approach her end of the beach; one of the more intrepid explorers who occasionally stumble upon the hidden cove. Turning his back to the wind and rain coming in off the sea, he glances up at the window and spies her observing him. He nods and Cara acknowledges him with a smile. He’s older than she expected, but attractive and cloaked in an air of sophistication, as though he knows his worth. And he’s definitely not local – she would have remembered him.

‘Sorry, Ben,’ she says quietly to herself.

Of course you do! Pop over to Amazon now for your copy:

Huge thanks to the author and Aria Fiction for my place on the tour!

I like variety and over the years have worked in a number of industries, but always it comes back to the written word. I have been employed as a proof-reader, copy editor and writer for a national newspaper, magazines and publishing houses. I am a member of the New Writers’ Scheme with the Romantic Novelists Association and was absolutely thrilled when my debut novel, ‘The Forgotten Promise’, was shortlisted for Choc Lit’s “Search for a Star”. I also run http://www.equihealth.co.uk – a complementary health business for horses, dogs, humans and other animals. I currently live on the Cornish side of the beautiful Tamar Valley.