I am delighted to be sharing an extract from The Room by the Lake by Emma Dibden as part of the blog tour. 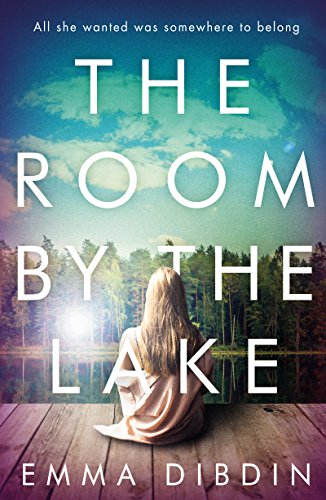 Caitlin never meant to stay so long. But it’s strange how this place warps time. Out here, in the middle of nowhere, it’s easy to forget about the world outside.

It all happened so fast. She was lonely, broke, about to give up. Then she met Jake and he took her to his ‘family’: a close-knit community living by the lake. Each day she says she’ll leave but each night she’s back around their campfire. Staring into the flames. Reciting in chorus that she is nothing without them.

But something inside her won’t let go. A whisper that knows this isn’t right. Knows there is danger lurking in that quiet room down by the lake…

After I get off the subway at 86th Street I’m tempted just to keep walking, up the east side of Central Park into the triple-numbered streets my overly cautious cab driver warned me to avoid. But I do go into the Met, walk up those grand front steps and exchange $8 for a little plastic token and walk in a random direction after a cursory look at the museum map, because I have no idea what I want to see.

I end up in the American Wing, looking at portraits of presidents and late colonial furniture, wishing I were the kind of person who found solace in art. Impressionism always works best for me – shapes and blurs, a feeling more than an image – or surrealism, Dalí’s clocks, images that are deliberately wrong. Anything too much like life, too much like people, and I’m bored.

If this were a film, I might conveniently happen upon a portrait of some senator who bore an uncanny resemblance to Jake, and it would be the final straw, the moment when I finally spun on my heel and raced back down the steps, hellbent on reunion. But none of the men in these portraits look anything like him, and I realize I’m struggling to remember his face. I’ve never been good with faces. It takes me a long time to mentally file away someone’s features, two or three meetings at least, but I thought he would be different. How can I not remember that face?

There’s still a deep ache in my chest and I have to sit with the weight of it, because I need to see him again. The possibility of it not happening is overwhelming. I can see that future so clearly, the one in which I stay in this museum until dark, buy a mediocre sandwich for dinner, go back to my empty hotel room where the phone has not rung and I will wake up tomorrow and he will be a memory. With no immediacy, he’ll fade, and I’ll forget that I ever had him.

‘Jake,’ I murmur, as if saying his name will keep him solid.

My heart’s beating hard in my ears. I try to breathe, try to reason my way out of this. I don’t have his number, but I can get it. I can go back to Jennifer’s apartment, or find her at Trader Joe’s, and I can ask her. She’ll think it’s cute. Or desperate. I just want to see him again.

Love has been so foreign to me for so long. I’ve seen love at first sight on screen a hundred times, read heartfelt descriptions of infatuation in novels, listened to hours of Taylor Swift on repeat, but romance has always resonated with me on the level of science fiction. Intriguing in abstract, but nothing to do with my reality. Now I have butterflies, and my stomach feels at once tight and unwound.

I force myself round more of the collections, and Egyptian Art is my saviour for an hour or two. I stand in front of one scarab beetle for so long I must look insane, too calmed by the shade of blue to move, trying to focus on the colour and shape and nothing else.

My friend Sophie told me this, once, trying to persuade me to think less. ‘It’s not about thinking of nothing,’ she explained, hands resting cool on mine. ‘It’s just focusing on something external, so you can sort of quiet down the noise.’ The noise has been getting louder and louder here, and I miss Sophie, so much. Her tip is working.

When I do finally take the subway back downtown, it’s not as bad as I expect, probably because I’ve built this moment up with such melodramatic force. I will be okay. I won’t see him again, and in time the ache will fade, and it won’t matter that I can’t remember his face. And when I reach the lobby, it’s his voice I hear first. As the door squeaks open it’s unmistakable, echoing though I can’t yet see the reception desk.

‘Could I leave a message, then?’

I round the corner, heart in my throat.

And he turns around, and smiles that wide toothy smile, and I’ve never felt safer.

Make sure you catch up with some of the previous bloggers on the tour for more brilliant extracts and reviews!

Emma joined me last August to discuss some of the themes in her debut novel, you can read about that here.

Want to read more? Of course, you do! Get over to Amazon now!

Emma Dibdin grew up in Oxford, and now lives in New York. She is a writer and journalist whose work has appeared in Esquire, Marie Claire, Harper’s Bazaar, Cosmopolitan, and Total Film. This is her first novel.