Well, it’s been a while since I cried at a book, never mind a short story, but I did with this one. I’m not ashamed to say I sobbed.

The Penultimate Man by Malcolm Hollingdrake is poignant, powerful, and heartbreaking. 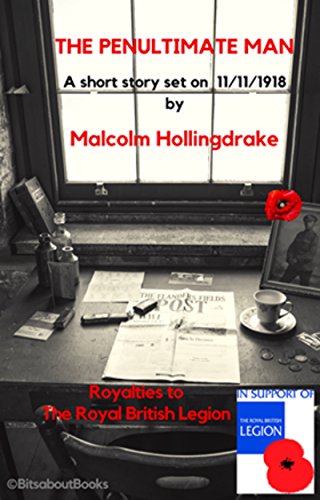 With this short story I am proud to support The Royal British Legion at this historic time, the centenary of the conclusion of World War One. I hope you will forgive the brevity of this book but like many a soldier’s life, cut short in his prime, I hope that it will live in your memory, that the poignancy of this story allows you a minute of silence, a moment of reflection where you will remember those who paid the ultimate sacrifice for what they felt to be a true and just cause.

It was on a Monday, on the eleventh day of the eleventh month 1918, that the war to end all wars came to an end that was for the many, a blessed relief. The indelible physical and mental scars would be carried by those from all sides of the conflict, making their return to a normal life, seem uncertain and confused. It was a period in time when much was expected from the mere mortal.

However, it is to the few that this story relates. It is dedicated to those who had to die in those months, weeks, days, hours and minutes leading up to the ceasefire as well as to those who succumbed to their injuries after the larks sang again above the blood-red poppy fields. It is with The Penultimate Man we focus our attention, a man about to pay the ultimate price in those brief moments before the thunder of war ceased.
***
On 26th September, 2018, I shall pay homage to a man I never met, my great uncle, William Hollingdrake, who died that day in 1918 and is buried alongside friends in France. My great uncle, a man whose face to me is that of a stranger is a man who carried my very DNA, a man who came through the years from 1914 until that fateful day… so close to the cessation of hostilities and yet so far! As with every passing year, I shall remember him.

The audiobook to this story will also be released in aid of the charity. I am grateful to the support of many in enabling this short story to be brought to you. Thank you for your support.

I love short stories and flash fiction when it works. It takes a great level of skill for an author to be able to get a complete story into a short number of words but when they get it right, my god are they effective.

The Penultimate Man by Malcolm Hollingdrake is superb.

A short story about a solider on the final day of World War One.

I was blown away by this story. I was so invested in the two characters from the first page that by the last page, I was an emotional wreck.

Hollingdrake manages to pour so much emotion and sentiment into the 4000 words of this novella and they hit me from the first word.

It’s not easy to talk about the plot as it’s so short I’d give everything away but trust me when I say, read it.

I devoured it in half an hour!

Hugest thanks to the author for my review copy, it’s amazing!

Want to get your copy? Of course you do: 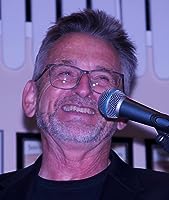 You could say that the writing was clearly written on the wall for anyone born in a library that they might aspire to be an author but to get to that point Malcolm Hollingdrake has travelled a circuitous route.

Malcolm worked in education for many years, even teaching for a period in Cairo before he started writing, a challenge he had longed to tackle for more years than he cares to remember.

Malcolm has written a number of successful short stories and has eight books now available. Presently he is concentrating on a series of crime novels set in Harrogate, North Yorkshire.

Born in Bradford and spending three years in Ripon, Malcolm has never lost his love for his home county, a passion that is reflected in the settings for all three novels.

Malcolm has enjoyed many hobbies including collecting works by Northern artists; the art auctions offer a degree of excitement when both buying and certainly when selling. It’s a hobby he has bestowed on DCI Cyril Bennett, the main character in his latest novel, ‘Crossed Out’.

Books for the Harrogate based DCI Cyril Bennett novels.