A little late to the party thanks to some wonderful Internet problems but I am delighted to be sharing the cover for Carol Wyer’s latest novel, The Chosen Ones.  Detective Robyn Carter is back with a bang and the cover is a belter!

They had not been forgiven. And they would never be forgotten ….

When a doting young father is murdered and his body discovered in a cornfield for his family to see, it’s a harrowing new case for Detective Robyn Carter.  But just as Robyn starts to investigate, a popular local doctor and young mother, is found dead outside her surgery.

As Robyn tries to find the link between the victims, she uncovers a dark web of secrets.  Were these much-loved members of the community as innocent as they seemed?

The killer has a message for Robyn and the carefully chosen victims.  Can Robyn get to the truth before she becomes the next target?

If you love Angela Marsons, Patricia Gibney and Rachel Abbott, you’ll love the latest pulse-pounding thriller from Carol Wyer. The Chosen Ones will keep you guessing until the very last page.

Ready for the cover?

It’s so pretty and creepy!! The team at Bookouture have done good, again!

It sounds amazing and I cannot wait to read it! Get your copy pre-ordered now so that on publication day, 24 May, it will dump straight to your chosen reading device! 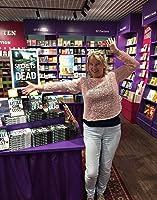 Carol E. Wyer, who also writes as Carol Wyer, is an award-winning author whose humorous books take a light-hearted look at getting older and encourage others to age disgracefully. In 2017 she moved to the “dark side” and embarked on a series of thrillers. The first, gripping Little Girl Lost, shot to the #2 best-selling spot on Kindle #9 best-selling audiobook on Audible, and was also a USA Today top 150 best-seller.
Her book, Grumpy Old Menopause won The People’s Book Prize Award for non-fiction 2015.
Carol has been interviewed on numerous radio shows discussing ‘Irritable Male Syndrome’ and ‘Ageing Disgracefully’ and on BBC Breakfast television. She has had articles published in national magazines ‘Woman’s Weekly’ featured in ‘Take A Break’, ‘Choice’, ‘Yours’ and ‘Woman’s Own’ magazines and the Huffington Post.

To learn more about Carol, go to http://www.carolwyer.co.uk or follow Carol on Twitter: @carolewyer. Carol blogs at http://www.grumpyoldmenopause.com which featured in The Mail on Sunday