Today I am joined by Shona Kinsella who is shining the spotlight on her new character, Ashael.

Ashael is an apprentice medicine woman from a stone-age society. She is around 20 years old, though no-one knows for certain. She is unmated and has no children, something she would like in the future but is in no great hurry over. Ashael is focussed on her position as Bhearra’s apprentice and is determined to become a skilled healer. She is deeply devoted to her friends, especially Rana who she views as a sister.

Ashael sprang into my head fully formed, name and personality already attached. That’s how most of my main characters come to me.

The book absolutely grew around Ashael. There are sections that I had intended to work quite differently but Ashael had other ideas!

Her willingness to do what is necessary, no matter the cost. Her steadfastness and loyalty. Her automatic kindness.

The fact that she doubts herself so much.

Did your early readers/editorial team like her to start with or did you have to change Ashael in any way?

My very first readers weren’t convinced that she would be so self-sacrificing, so I had to show more of her thought processes beyond just ‘This is the right thing to do so of course I’ll do it.’ My editor mentioned that he liked the fact that she initiates all of her romantic experiences – there’s no sitting around waiting for a man to make the first move, or make decisions for her.

Of all my characters, Ashael is probably the one that shares the most traits with me, which makes her the hardest for me to talk about! The book was initially inspired by a dream that I had about 10 years ago and Ashael fills the role that I had in the dream.

There will be another two books in the series so Ashael’s story isn’t over yet. I can’t say much more than that because *spoilers*

I like to think that we would be but it might be one of those situations where you’re so alike you annoy each other!

She sounds great! And if you’d like to find out more about Ashael, you can grab your copy of Ashael Rising over at Amazon, here’s the blurb … 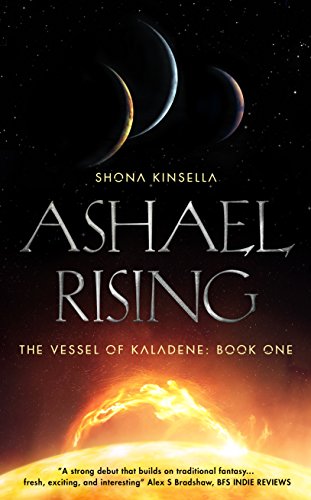 Ashael is a hunter-gatherer woman, apprenticed to Bhearra, the healer and spiritual leader of their tribe.

The Zanthar are invaders from another world who extend their own lives by stealing the life-force of everything around them. They were last seen on KalaDene 200 years ago. They have returned, looking for The Vessel, a being prophesied to hold the life-force of the land.

Iwan is a slave to the Zanthar, descendant of those taken as slaves the last time the Zanthar visited this world. He is sent out as a spy, while his mother is held hostage to ensure his compliance.

When Ashael meets Iwan in the forest, neither realise that she is the one the Zanthar are looking for. The fate of KalaDene and all of its people rests on her shoulders.

Shona Kinsella is the author of Ashael Rising, (Unbound, 2017) the first in her series, The Vessel of KalaDene. She is also one of the editors of the British Fantasy Society’s fiction publication, Horizons. When she is not writing or wrangling her three children, she can usually be found with her nose in a book.

To be in with a chance of winning a signed copy of Ashael Rising, follow the link below …