I am delighted to be hosting a competition for one lucky winner to win a signed copy of Helen J. Christmas’s novel, Beginnings.

Beginnings is the first book in Christmas’s series which starts life back in the 70s and it’s one I’m looking forward getting stuck into!

Before that, here’s the blurb …

Beginnings is a romantic thriller set in the criminal underworld of 1970s London. Eleanor Chapman is 16. She has no idea her father is employed in a world of organised crime until the day he is forced to go on the run, leaving her at the mercy of dangerous people.

Her life is spiralling out of control yet on the night she plans to escape, she stumbles across a mysterious prisoner. His name is Jake, a rock musician from Holland and he has a contract on his life.

Their daring escape across London eventually draws them into a place of hiding before Jake’s chilling story begins to unfold. He was the one vital witness to a sinister scene leading up to the death of a British MP and now those responsible want him silenced. As two young people, thrown together by fate they develop intense feelings for each other. It does not take long for Eleanor to realise that she will do anything possible to keep Jake alive.

Their tender love bond keeps you turning the pages as they live on a knife edge, desperate to escape London. Will they outrun the deadly enemies who stalk them? Or are the people at the top more powerful than they think?

Now I’ll be adding this to my TBR, I don’t know about you but I always think that the organised crime gangs of the pre-90s era were the ‘best’ of the bunch. Gentlemen who had codes and morals – and some very dapper clothing to boot, not the hoodie covered, baggy jeans wearing boys of the noughties!

If I didn’t have such a busy few weeks I’d be delving straight into this one. And the best thing … this is book one in a FIVE book series! So, if you’re looking for a new crime adventure with a strong female lead, then I don’t think you’ll go far wrong with this one!

Now, to be in with a chance of winning a SIGNED COPY (lucky things you are – I can’t enter!!) click the cover below and follow the instructions on the Rafflecopter you’ll be taken to. 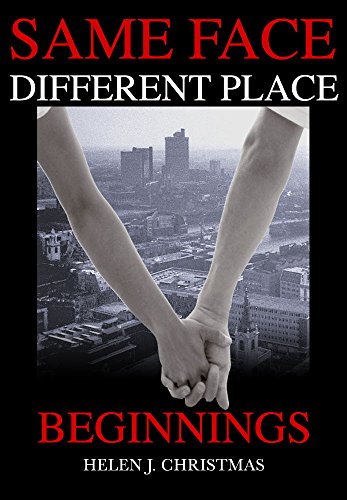 Be sure to catch up with the rest of the tour which has been organised by the very lovely, Rachel, over at Rachel’s Random Resources … If you’re an author looking to promote your work, get in touch 🙂

Helen J. Christmas lives on the south coast of Sussex with her husband. With a love of writing since childhood, she started her decade spanning thriller series ‘Same Face Different Place’ in 2011. Her first book ‘Beginnings,’ set in 1970s London, combines romantic suspense with a hard-hitting conspiracy thriller. Writing is something she juggles around family and social life. Helen is self employed and enjoys running the web design company, she and her husband set up from home. They have no children but enjoy the company of a faithful border collie and a fluffy white cat. Helen confesses to have got most of her ideas for writing, whilst walking Barney along the beach.