I am delighted to welcome Steve McHugh to my blog today as part of the blog tour for his latest novel, Scorched Shadows. Steve joins me to take about finally ‘getting around to it’.

Over to you, Steve!

Getting Around To It.

I was 25 when my first child was born. Her name is Keira and she’s now 13 years old. This not only makes me feel a bit old, but also has the added side effect of having a teenager in the house. Anyone who has ever had one of these delightful people in your house will be aware of the danger and peril that comes with trying to talk to one, or get them to actually do anything. Before Keira’s birth, people had told me that being a parent was fun. These people lied to me.

Anyway, moving swiftly on, like most new parents, I was very nervous about Keira’s impending birth and how I was going to handle being a father. But I also had another issue. I’d always wanted to be a writer, Ever since I was 12 or 13 years old. I wrote stories in English class, I wrote stories at home, and yes they were probably all terrible, but I loved doing it. But when I finished school and started college that need to create dissipated quite a lot, and I found myself thinking, “I’d get around to it.”

With Keira’s birth, I decided, “I’d get around to it,” was no longer a viable option. I needed to try to do it. I didn’t want to be that person who got stuck in a job they hated for decades because they didn’t try to follow the thing they professed to love.

And so began the long days and nights of working on my first book. I joined an online writing group (run by Kelley Armstrong), and I practiced my craft every day for several years.

It took me about 5 years (and the upcoming birth of my second child), before I’d managed to complete my first book. It wasn’t very good. In fact as far as the writing was concerned it was awful, but I had the bug. And I had the support of an online community of like-minded writers who wanted to succeed.

The next book I wrote was Crimes Against Magic. It took me about 3 years to finish and some time more before the book was actually published, but it was a glorious moment. I’d become a published author, and all it had taken was dozens and dozens of hours of untold work and toil. And I’d loved every single second of it. Actually that’s a lie. I’d probably loved about 80% of it, but most importantly, I’d learned from every second of it.

My hugest thanks to Steve and Anne Cater from Random Things Through My Letterbox Blog Tours for my place on the tour. 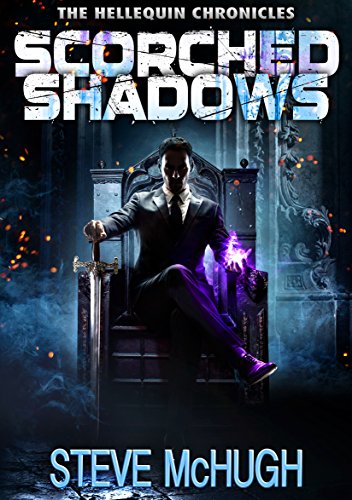 In the final chapter of the Hellequin Chronicles, secrets will be revealed, friendships tested, and destinies fulfilled.

Avalon is under siege. A shadowy cabal, headed by a mysterious figure known only as “My Liege,” has launched a series of deadly attacks across the globe, catching innocent human bystanders in the crossfire.

Emerging from the debris of battle, Nate Garrett, the sixteen-hundred-year-old sorcerer also called Hellequin, and his friends must stop My Liege once and for all. But powerful forces stand in their way. To save Avalon, they will need to enlist the help of Mordred, once Nate’s greatest nemesis, now his most formidable ally. But Mordred is grappling with a dark prophecy that could spell Nate’s doom…

The fate of the world hangs in the balance. Even if Nate can halt the war, will there be anything left worth saving?

Steve McHugh is the author of the popular Hellequin Chronicles, and upcoming Avalon Chronicles. The seventh and final Hellequin Chronicles book, Scorched Shadows, is out in paperback and audible on 19th December. He lives in Southampton on the south coast of England with his wife and three young daughters. When not writing or spending time with his kids, he enjoys watching movies, reading books and comics, and playing video games.