It’s my stop on the blog tour for Gerard MacDonald’s novel, The Prisoner’s Wife and I have a cheeky little extract for you to whet your appetite for the rest of the book … 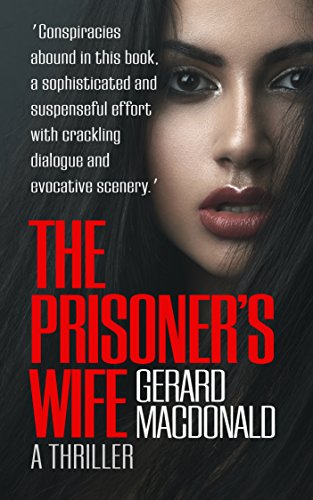 “Living in Paris in 2004, former CIA spy Shawn Maguire accepts a freelance job to find an Iranian named Darius Osmani. Abducted by the CIA after claiming to have information about a nuclear device, Osmani is being interrogated in one of its secret “black prisons” as a suspected terrorist. Maguire’s efforts to track him and avoid his own downfall are complicated by his attraction to Osmani’s wife, Danielle. … As spies go, Maguire is a decent, straight-shooting soul—and not only when he’s putting his skills as a sniper to work. He searches for Osmani, on a road that takes him and Danielle to Morocco, Egypt and the political danger zone of Pakistan—where U.S. intelligence has secret plans for the soon-to-be-reinstated female prime minister.

Conspiracies abound in this book, a sophisticated and suspenseful effort with crackling dialogue and evocative scenery. Maguire is a first-rate protagonist, complicated and heroic. And the book does a great job of capturing the casual lawlessness of the American intelligence effort via its rendition campaigns and the propping up or deposing of criminal leaders depending on America’s needs.

Shawn met Ellen Reynolds when he was stranded in Manhattan at the turn of millennium, without a woman.

Martha – dismayed by the new President; out of love with her native land – had left America to live thousands of miles away in the English village from which, she said, her grandmother began the journey to America.

Shawn, lonely, abandoned in New York, went to parties. He met Ellen at one which, he knew, was out of his weight and class: a Thanksgiving fling in the Apthorp. The Apthorp is a heartbreakingly expensive apartment block on the upper west side. It was not a place Shawn would have considered had he not been lonely and tired of eating pizza-to-go.

The apartment of the party, which overlooked the river, was the size of a small airfield – an airfield with mirrors and waiters and tapestries and near-crystal chandeliers. The place belonged to a banker who invited Shawn only because he believed that Martha (who had once been a colleague) was still in town. There was just-visible dismay when Shawn arrived alone; and comparable disappointment on his part since, while a few men registered his presence, none of their over-groomed women gave him more than a glance. Smiling, chatting, lightly hugging, air-kissing, women edged around him as if he were a misplaced chair.

Though obviously single, Shawn gathered not one, but two tastefully tinted cocktails from a passing waiter and escaped to a balcony overlooking the river. He planned to ease the pain by drinking both, and going back for more.

Ellen, who followed him out, took one of the frosted glasses from his hand. ‘Kind,’ she murmured, drinking deeply. ‘I’m Ellen.’ Then she said, ‘Dear God, what do we have here? Rubbing alcohol? You may need to carry me home.’

Shawn didn’t answer. He scanned her undernourished body. Young and skinny, Ellen looked coldly edible, white meat on a pre-cooked chicken. Her clothes, at a guess, represented a couple of months of Shawn’s current salary. He searched for something to say. ‘So,’ he said finally, ‘what are you doing here?’

‘On the balcony?’ she said. ‘Same as you. Getting out of there before I died of boredom.’

She finished her drink and looked through the window, hoping to snag a waiter.

She stared. ‘You’re asking me? God, we always come to these things. I have a husband somewhere. Robertson. You know? Owns half the city. I was wondering who invited you. You look like you’re going to a football game.’

Shawn, who spent more than he could afford on clothes, could find no adequate reply. Rather than searching for words, he moved forward, pushing Ellen along the balcony. At the time, he wasn’t sure why he did that. When she was against the far railing, holding it to stop herself falling into the river, and when he figured they could no longer be seen from inside the room, he kissed Ellen, bending her backward, like a drinking straw, over the ironwork.

If this has got you intrigued, you can pop over to Amazon now to get our copy: