I am delighted to be sharing an extract of Stuck With You by Anna Premoli today … Grab a brew and a biccy, put your feet up, and enjoy! 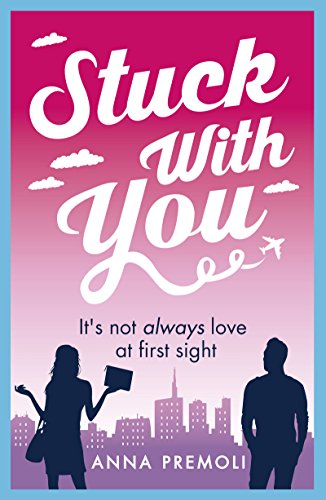 A smart, romantic comedy about how finding The One doesn’t always have to be love at first sight…

Lavinia Ferrari is in her fifth year at Bocconi University where she studies Economics when she is introduced to a new project that will guarantee her extra credits. She’s intrigued… but it means the class must team up with students from the Computer Engineering course. Lavinia has absolutely no interest in the project, and to top things off, she’s paired with Seb Marconi who is less than enthusiastic.

When the work begins, her friends seem to be making great progress with their partners, but Lavinia isn’t having the same luck… Seb is making it quite clear that he’s not interested in the project, or Lavinia, fuelling her frustration.

She has no choice – they’re stuck in this, and besides, she won’t receive her extra credits unless they work together. Lavinia must come up with a way to convince the guy who drives her crazy to put the work in… but how?

From the author of LOVE TO HATE YOU, YOU DRIVE ME CRAZY and UNTIL LOVE DO US PART.

He didn’t cry out. He fell gently, the way a tree falls. There wasn’t even a sound, because of the sand.

It is curious how the human mind can remember precisely those few moments of its own past that were decisive. For better or for worse. The real problem is that while you’re experiencing them, you are completely unaware of the consequences they are going to end up dragging behind them. Though at the end of the day, maybe that’s a blessing. The day my future took an unexpected turn I was in fact sitting in the kitchen, with absolutely no idea at all about the importance of the moment, busy blissfully eating one of those yogurts that claim to be so healthy they can improve the fortunes of your whole digestive system and probably that of the person sitting next to you to boot. If the words ‘yogurt’ and ‘blissfully’ can actually be juxtaposed in the same sentence, that is.
I had just got back from the Christmas holidays and was firmly convinced of the need to purify myself, hence the penance of high-fibre yogurt. Only someone very gullible, who feels guilty and is all set to start on the self–flagellation can seriously imagine that there’s any point at all having something like that for dinner – oh, you clever little advertising goblins, how well you know me!
“Well, if you will always go over the top with the mascarpone cream, Lavinia…” said my mother, wasting no opportunity to tell me off. Then, like now, the woman was on a diet – she’s always on a diet, even though she’s practically transparent – so I wasn’t absolutely sure how she had the nerve to criticise me. I mean, why ridicule my attempt to purify myself when she had made it so much of a purpose in life that it was practically a religion?
I licked my spoon carefully before answering.
“I like mascarpone cream. I think it would be silly to deprive myself.”
“Yes, well, just wait until you’re my age and have given birth to two children and then we’ll talk about how good too much sugar is for you.” She shuddered at the thought. “If I hadn’t been careful about what I eat since I was a young girl, I would never have managed to get to fifty with a figure like this,” she said, gesturing to her, admittedly, very slim waist.
I stared at her doubtfully – so fasting was considered a form of power nowadays, was it? I barely managed to hold back a laugh. My mother had never had the slightest sense of humour, or talent for self-criticism.
“Oh, leave her alone,” my father interjected unexpectedly, who although physically present in the kitchen, was as always with his head elsewhere, busily responding to one email after another on his Blackberry. In his case, I think that rather  than it just being work, it’s more like an addiction: he needs to feel more important and irreplaceable than anyone else.
To be fair, my dad is one of the top executives of a multinational, but to hear him talk you’d think that he had more on his plate than the president of the USA. I don’t really understand what it is he actually does, apart from ranting away on the phone even when he’s at home and frowning with annoyance every time he opens an email. Personally speaking, I wouldn’t be able to handle a job that puts me in a bad mood pretty much around the clock. But my father has a very profound and, at this point, smoothly functioning relationship with being angry – one which definitely goes much deeper than the relationship he enjoys with his daughters. Not to mention the one he enjoys with his wife. She’s a chapter all to herself.
“I only told her she should be careful,” my mother replied with a deadly serious expression. “She’s eighteen. If she gets fat now, that’ll be it.”
Of course – in my mum’s vision of the world, me and perdition always walk hand in hand. As a reply, my dad gave a sort of disparaging grunt and looked back down at the little screen on his phone. He’s not a person I would ever define as being good company, but having spent all those years with a woman perennially on the verge of anorexia has probably played its part in making his character even worse.
“Instead of wasting time talking about nonsense like food, why don’t we discuss the question of what Lavinia’s going to do at university for a moment?” he suggested.
I was so taken aback by his words that I just stood there blinking. The truth was that my ideas on the issue were still pretty confused, and I had been hoping to have a bit more time to think about them – like, all the rest of my life.

Ok, not the rest of my life, maybe, but at least a few months. Less than half of my classmates had the faintest idea ​​what faculty they were going to choose, so in a way I felt like part of a reassuringly large group of the chronically undecided. Sort of, ‘it’s not just us, it’s our whole generation that hasn’t got a clue what to do’, if you know what I mean.
“Oh yes,” chirped my mother in agreement. And the fact that they were agreeing on something gave me a strange feeling of panic. It happened so rarely that until pretty recently my sister Francesca and I used to make a note of it on the calendar. Until Francesca had walked out of the house, slamming the door behind her, that is. That had only happened recently, and it was totally taboo to talk about it. My parents were still expecting her to come crawling back, begging them for forgiveness – and even though they didn’t let on, they were very shaken by the fact that she still hadn’t.

Sounds great, doesn’t it! Want to read more? Of course you do, pop over to Amazon now and grab your copy! My thanks to the author and the team at Aria for my place on the tour 🙂

Anna Premoli is a bestselling author in Italy. She began writing to relieve stress while working as a financial consultant for a private bank. Her previous novel, Love to Hate You won the Bancarella prize in 2013.