I waited what felt like FOREVER for this sequel to Waller’s 34 Days … I can’t remember being this excited about a book for a VERY long time and let me tell you, it did not disappoint!!!! Before I tell you my thoughts though, here’s the blurb … 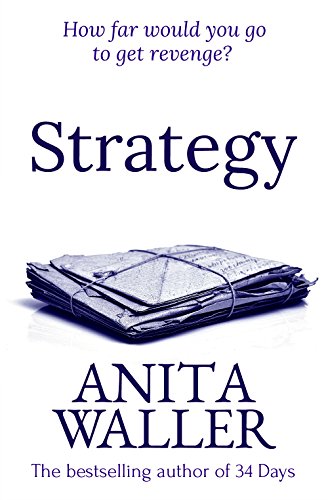 A gripping psychological thriller from an international best-selling author

How much can one family take?

Jenny Carbrook murdered three people to make it look as though there was a serial killer at work in Lincoln, when the only person she wanted to kill was Ray Carbrook, her father-in-law, who had raped her the week before her marriage to Mark, Ray’s son.

Jenny wrote letters detailing her crimes in order to protect everyone she loved, but was forced to go into hiding before retrieving the evidence against her.  Not only did she leave the letters behind but also her young daughter, Grace.

I totally devoured Strategy, very almost in one sitting and only not all in one because I started it at 11.30 p.m. one night!

Picking up a few months after the events of 34 Days, Strategy throws us straight back in to the lives of the Carbrooks.

Mark is still getting over the breakdown of his marriage but he’s not actually finding it that hard considering his ex, Jenny, murdered his dad, Ray, and a couple of other people to make it look a serial killer was at large.

As things are starting to settle down for him and his children, Jenny is quietly watching them and plotting on ways to retrieve her letters; the ones she wrote to exonerate all her family in the murders she committed; the ones Mark is keeping to stop her from taking his children; the ones which see her locked up for a VERY long time if they are ever in the hands of the wrong person.

I wasn’t entirely certain that this follow up would happen when I finished 34 Days, it was left wide open so I was delighted when I found out that it was coming out! As soon as it hit my Kindle I devoured it and I was NOT disappointed, Waller takes back in to the fold of the Carbrooks as they are starting to put their lives back together following the devastation that we left them in at the end of 34 Days.

It’s so hard to talk about the plot of either book without spoiling it for those who have yet to read them though!

Strategy is sleek, the writing from Waller is once again intelligent, perfectly executed, and completely enthralling. I could not put this down!

Waller is definitely one of my favourite writers; she has a way of dragging you on to the pages, plonking you right inside the pages and making you live in the world she has created. We follow a cast of three-dimensional characters as they try to come to terms with the past, the present, and the very uncertain future.

With a pace that never lets up, chapters that will hook you in and force you to keep reading, make sure you have no plans before you starting this one!

My thanks to the team at Bloodhound Books for my review copy, you can get yours over at Amazon …

Anita Waller was born in Sheffield, South Yorkshire in 1946. She married Dave in 1967 and they have three adult children, Matthew, Siân and Kirsty along with seven grandchildren ranging in age from Brad at 23 down to baby Isaac at 2 ½ years.

She began writing when she was around 8 years of age, writing ‘compositions’ at junior school that became books with chapters.

In 1995 she sent Beautiful to a publisher and as they reached the contract stage the publisher went into liquidation. It was all to do with Eric Cantona and leaping over the barrier – don’t ask! As a result, the book was consigned to the attic in dejected disgust but in 2013 it was dragged out again for an enforced complete re-type. The original was written on an Amstrad 8256 and the only thing that remained was one hard copy.

Anita is not a typist and it was painfully reworked over two years, submitted to Bloodhound Books who, within three days of reading it, offered her a contract. 31 August 2015 saw its release into the wide world.

34 Days followed, with its launch in October 2016. This was a huge success, particularly in the United States. While this, her third book in the psychological thriller genre, was flying out in all directions, she began work on her fourth book.

Winterscroft was a change in genre. It is a supernatural tale, set in Castleton, Derbyshire, and its release date was February 2017.

While she was writing Winterscroft, it became very clear from reading reviews that a sequel to 34 days was needed, and she began work on that. Bloodhound Books will be launching her latest work, Strategy, on 10 August, 2017.

So where next? Her current work in progress is going by the working title A Legal Issue, and once again is a psychological thriller.

In her life away from the computer in the corner of her kitchen, she is a Sheffield Wednesday supporter with blue blood in her veins! The club were particularly helpful during the writing of 34 Days, as a couple of matches feature in the novel, along with Ross Wallace. Information was needed and they provided it.
Her genre is murder – necessary murder.
Links: