Broken Branches is a fantastically creepy read and I am delighted to be sharing my review as part of the final day of the blog tour today.

You should also pop over to see Mairead at Swirl & Thread as the author joined her today to introduce his protagonist, Ian Perkins, in more detail.

But first, here’s all the bookish information you need …

‘Family curses don’t exist. Sure, some families seem to suffer more pain than others, but a curse? An actual curse? I don’t think so.’

A family tragedy was the catalyst for Ian Perkins to return to the isolated cottage with his wife and young son. But now they are back, it seems yet more grief might befall the family.

There is still time to act, but that means Ian must face the uncomfortable truth about his past. And in doing so, he must uncover the truth behind the supposed family curse. 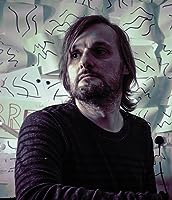 M. Jonathan Lee (also known as Jonathan Lee) was born in 1974. He is an award-winning novelist who has had two novels in the #10 Amazon charts. He was born in Yorkshire, northern England where he still lives today.

His first novel, the critically-acclaimed The Radio was shortlisted for The Novel Prize 2012 and is the first in the loosely titled The ‘The’ trilogy. His second novel, The Page (the second in The ‘The’ trilogy) was released in January 2015.

His third novel A Tiny Feeling of Fear was released in September 2015. It has been hailed as ‘original and inspiring’ by Sunday Times best-selling author, Milly Johnson.

He is working closely with Rethink and Mind Charities to raise awareness of mental health issues, and is a regular commentator on the BBC.

He signed a four-book deal in February 2015 and is currently writing a non-fiction rock biography about Boston-based band Hallelujah the Hills. He is also writing three further fiction titles, the first of which is to be released in late 2017.

His fourth novel, Broken Branches is due out in July 2017, published by Hideaway Fall.

He is happy to talk to anyone…

Ten out of ten for building such a creepy, uneasy atmosphere from the first page Mr Lee!!!

Wow! Broken Branches has it all, intrigue, a dodgy cottage, a creepy tree, a family secret (or twenty), death, a curse, and yes, a broken branch.

Changing between timelines, we see Ian and his wife, Rachel, as they are now, then jump back in time to see how they got to become the couple they are. We see them in their youth as a loved up pair in the first throes of a new relationship and then we see them now, the not so loved up ‘old-marrieds’. But what happened to them over the years to create this distance?

It’s like having a jigsaw in front of you, some of the pieces are missing, some are from a different set, and some aren’t actually jigsaw pieces at all, but they all look like they fit, they all seem to be real, and they all want to be part of the final picture.

Lee is a wonderful writer. His characters are flawless in their creation and the prose is delightful to read. He has a real gift for creating an atmosphere and I found myself using my bedside lamp instead of my little reading light for this one! The shadows were a little too creepy whilst reading! Brilliant!

Broken Branches is captivating, you will find it so hard to put this down, to tear yourself away, to do anything other than finish this.

And talk about jaw-dropping ‘OMFG’ moments!

Now, in relation to the marketing, at no point have I seen Broken Branches marketed as a ‘psychological thriller for fans of so-and-so author’ or ‘with a shocking twist that will blah blah blah’ and I am so pleased for that, it meant I had no expectations.

I loved the book.

I would love you to love it to! Get it and get it now folks! You won’t be disappointed at all, a thoroughly compelling, totally captivating, and utterly brilliant book!

Massive thanks to the author and publishers, Hideaway Falls for my review copy.