Today I am pleased to share my review of Jessica Jarlvi’s debut novel, When I Wake Up … 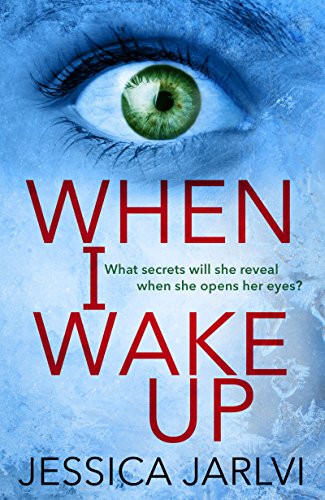 A breathtaking, heart-pounding, dark debut, sure to delight fans of The Girl on the Train and Before I Go To Sleep.

When Anna, a much-loved teacher and mother of two, is left savagely beaten and in a coma, a police investigation is launched. News of the attack sends shock waves through her family and their small Swedish community. Anna seems to have had no enemies, so who wanted her dead?

As loved-ones wait anxiously by her bedside, her husband Erik is determined to get to the bottom of the attack, and soon begins uncovering his wife’s secret life, and a small town riven with desire, betrayal and jealousy.

As the list of suspects grows longer, it soon becomes clear that only one person can reveal the truth, and she’s lying silent in a hospital bed…

Starting with a bang, When I Wake Up jumps straight in at the deep end with the brutal beating of teacher, wife and mother, Anna.

From the outside it appears that there are no enemies to be found, no one who would have the motive to do this to such a wonderful person, but as the plot unravels, so do the secrets of those in Anna’s life – but would any of them really go so far as to try and kill her to keep their secret a secret?

A solid debut, When I Wake Up is a twisty tale of intrigue and although in places there is a little too much detail, a little too much in terms of descriptives and information, the flow and pace of the book are good.

Jarlvi writes very well, managing to pull you into the pages and I found myself lost in the characters, who are very well developed – I didn’t particularly like any of them, and that was the whole point! Any one of them could have been the perpetrator.

There are several characters in this and with such a range in the cast, it could be easy to get lost as to who is who, but you don’t, Jarlvi keeps it simple enough to remember but twisted enough to make you wonder and second guess your own guesses.

I really enjoyed this one and I think that for a debut novel Jarlvi has done a sterling job! On with the next one now please! I can’t wait to see what else you have in store for us!

My thanks to the author and to Aria Fiction for my review copy and for having me on the blog tour.

You can get your copy over at Amazon UK now!

Born in Sweden, Jessica moved to London at the age of 18 to obtain a BSc Hons degree in Publishing and Business. She worked in publishing in the UK for a number of years before heading to Chicago where she edited a magazine for expats. Back in Sweden, she completed a Masters in Creative Writing. Since 2010, Jessica has taught journalism and media at a local university, and has spent the last five years as the marketing and PR manager for a British firm. Last year, she was one of the winners in the Montegrappa Prize for First Fiction at the Emirates Airline Festival of Literature. Jessica is married with three spirited children, and although she’s known for her positivity, her writing tends to be rather dark!