Today I am joined by Chill With A Book Award winning author, Alex Martin, to talk all things bookish …

Hello everybody, it’s great to meet you here and a privilege to be invited. I’m Alex Martin, someone who has always written stories but only in the last five years had the courage to publish them. I’ve had many jobs in the past including being a personal assistant, a legal secretary and running my own natural health practice. I live in south Wales, where my husband’s work took us and we have two wonderful children, now adults. I love to read, as well as write, though I find doing both at the same time unhelpful unless it’s research. I enjoy gardening, walking, day-dreaming and relax most when cooking for a crowd.

Thank you very much, Emma. You’re absolutely right, I’m thrilled to have received this recognition from Chill with a Book and thanks to Pauline Barclay for awarding it.

The germ of the idea for this story was born many years ago. I was working as a secretary in a legal firm and had to deliver a will to a house on the Wiltshire downs. With the errand achieved, I looked around the tiny village and felt drawn to one particular dwelling. It was a beautiful house, larger than a cottage, but nothing grand. It was ancient but still stood, square and sturdy, basking in the sunshine and smiling across to the other houses skirting the village green.
As I approached its whitewashed walls, I noticed it was empty. I peered in through the warped old glass windows, tucked deep under the thatched roof. Inside was a large room with a massive fireplace at one end. The floor was uneven, made of large limestone flagstones, glossy from the hundreds of feet that had worn it smooth over time. The ground floor was only one room deep and I could see straight through into the walled garden through the window opposite.
Although the house was much humbler than the Meadowsweet Manor featured in The Rose Trail, it spoke to me of the era in which half the book is set, the English Civil War. I sensed a family at war with each other; conflicted and arguing, heard the clash of swords and the clang of armour. I remember vividly the chilling sensation that crept up my arms, making them spring goosebumps all the way up to my thumping heart.
I knew then that I would never forget the place. I wondered if I had lived there before, in that war torn age, or perhaps I would live there in the future, with a family of my own.
Neither scenario has happened, as far as I know, but the memory remains crystal clear in my mind. That moment of seeing into the past has created The Rose Trail and other similar experiences are incubating.

A lot! Just as I’m embarked on an ambitious book set in World War Two and struggling with overwhelm, this award has renewed my enthusiasm and determination. I feel vindicated as a writer and my self confidence has received a much needed boost.

The Rose Trail is my fifth book, and hopefully will spawn a new series. I have another, called The Katherine Wheel series. It starts with Daffodils which begins just before World War One. It is based on a village where my children were born. When we lived there in the 1980’s there were still traces of the feudal regime that came before it and I became fascinated with its history. We lived in what I called ‘Skid Row’ – a humble string of six cottages, some of which still had earth floors. One of our neighbours, Old Harry (with a wooden leg) told me about how gradually over the years, plumbed-in water had arrived. When he moved there in the Victorian era (yes he was that old!) they’d had to fetch it from the well on the village green in buckets, then they had one tap between the six cottages, then a tap between two and finally a lean-to kitchen with a proper sink and plumbed-in tap. A story stirred within me when I heard this tale and I decided to write about it. It took ten years, off and on, to complete the project, and it dragged me, unwillingly, into the First World War, just like Katy Beagle and Jem Phipps. I learned so much through researching this – about human nature, brutality, politics, history and most of all, enduring love.

Daffodils, to my eternal astonishment, has done really well and demand pushed me into writing a sequel. Peace Lily takes the story across the Atlantic into Boston when the aristocratic Cassandra falls in love with an American officer, much to the consternation of her tyrannical and snobbish mother, Lady Amelia, who had previously thrown Katy out on her ear as a housemaid after flirting with her son in Daffodils. I wanted to show how the war had not only emancipated women from their strait jackets but also how it  opened up the world so other cultures came to influence the narrowness of English country life. This had an effect on class structure too and a lot of Peace Lily is about our heroine, Katy, breaking free of this. She takes it a stage further in the third book, Speedwell, by opening up a garage, breaking the gender taboo, and entering the exciting world of motor racing in the 1920’s. Speedwell ends on a deliberately ambiguous note. I knew I wanted to carry on writing about these characters whom I had grown to love.

Following neatly on! My current project is Woodbine and Ivy, the fourth and possibly final book in The Katherine Wheel series. All the loose ends left dangling in Speedwell will be tied up as the next generation of Phipps and Flintock-Smythes face the challenges posed by another world war. I have the story mapped out and much research has been done. I just need to get cracking!

Funny you should ask, as the reason Woodbine and Ivy is taking a while is that we’ve just taken on a renovation project in France. Currently we are trying to create a massive lawn from a sunflower field. The pressure is on because our daughter is planning to get married here next summer and the lawn will host the marquee! I ache all over!

Ooh, that’s a tough one. Only three??? Jane Austen (Pride and Prejudice etc.), E.M. Forster (Room with a View, Howard’s End), and Winston Graham (Poldark) but there are literally thousands of others.

Initially I wrote about my own experiences of picking grapes while escaping a disastrous marriage in the 1980’s in The Twisted Vine. Then I got drawn into Daffodils so historical fiction became my genre by default. However, The Rose Trail is definitely a time-slip novel with a paranormal thread and I’m loving writing the present day section.

I’m open to any but, not police procedure thrillers or bleak noir detective stories.

I love the smell of coffee but it doesn’t suit me. I do, however, drink gallons of Earl Grey tea, especially when writing.

Yes, but only a little.

I have no regular sleep pattern. When I’m on a writing roll I like to get up around dawn and write in the quiet of the morning. Sometimes I suffer from insomnia for long stretches but these are often my most creative times and I’ll write in the middle of the night. I’ll only stay up late if I’m dancing.

Anything goes – see above.

I have learned through hard experience to plan!

I like my old-fashioned kindle the best, not back-lit with distracting internet as on my tablet – just BOOKS, nice and light and a vast library to carry in my pocket.

NOOOO! Pizza is just cheese on toast and overpriced in my opinion, unless it’s stone-baked on a wood fire in the heart of Italy.

The toughest question of all! Off the top of my head, for sheer pleasure, These Old Shades by Georgette Heyer. Not intellectual at all!

Many, many thanks, Emma. It’s been a pleasure.

If you’d like to keep up to with all Alex’s news, you can follow her at the following places:

In The Potting Shed

If you’d like to find out more about the awards, follow this link: Chill With A Book Award

Want to know more about the award winning book? Here’s the blurb … 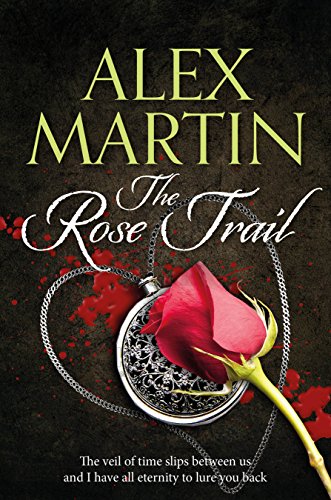 Is it chance that brings Fay and Persephone together?
Or is it the restless and malevolent spirit who stalks them both?
Once rivals, they must now unite if they are to survive the mysterious trail of roses they are forced to follow into a dangerous, war torn past.
WINNER OF ‘CHILL WITH A BOOK AWARD’ June 2017
The Rose Trail is a time slip novel set in both the present day and during the English Civil War. The complex story weaves through both eras with a supernatural thread.
Like all Alex Martin’s stories, this book has great characters, a moving story and a deeply romantic theme. Although complicated, the ending is both intriguing and uplifting.

You can get your copy over at Amazon UK

Alex Martin is finally fulfilling her dream of seeing her work in print, and loving it. She writes in her Plotting Shed, at the end of her long garden, where there is no internet to distract her, just a view of the Welsh mountains.