Good evening bookworms! Tonight I am joined by author Laura Wilkinson, who is going to introduce us to one of the characters from her latest novel, Skin Deep.

Hi Emma, I’d like to introduce you to Cal, one of my two protagonists from Skin Deep, my latest novel.

Cal is at the heart of Skin Deep and although he has less page time than the other lead, artist Diana, without Cal there would be no story.

He is Diana’s inspiration, her muse, and he is central to her conceptual work. He is a child when we first meet him. Mostly ignored, hidden away in a squat on a notorious sink estate in Manchester in the mid-1980s, he is bright and kind, a little shy but brim full of a child’s inquisitiveness and creativity, despite his gloomy environment.

Cal was born to be looked at and when he is discovered by struggling fine arts student Diana, she finds the inspiration she needs. Friendship, and love, grows but as Cal matures and asserts his own needs conflict follows. Like all adolescents (and many adults!), Cal struggles to find his place in the world, especially one so obsessed with appearance. Diana’s work focuses on concepts of beauty and it is this that is at the root of their discord. Happy as subject and muse as a child; as a young adult he rebels.

It seems incredible to me now but Cal didn’t have a voice in the first draft of the novel. Of course, he was there but we saw the story entirely from Diana’s viewpoint. Reading through that initial draft, I knew almost instantly that we had to hear from Cal. I knew him through Diana’s lens and it was challenging, fascinating and enormous fun finding his voice, sitting on his shoulders looking at the world. I became acutely aware precisely how much we judge people on appearance, how important first impressions are and how prejudiced we can be, even when we consider ourselves sensitive, empathetic beings and work hard at not being judgemental!  And I’d never written a first person male character before (third person but not first) and that stretched me as a writer. Skin Deep had a long gestation period and this helped with Cal’s voice. I have sons and during the lifespan of the book’s creation they’ve moved through childhood to adolescence and this helped with ‘becoming young male’. That said, I believe that people are people and men and women share more similarities than differences.

This is a hard question to answer because, for me, characters and plot are enmeshed. For plot I mean the central problem or question. I’ve never yet begun a story with just one or the other; the two arrive in tandem.  The setting of the first part of Skin Deep – the aforementioned estate – is a place I’d wanted to write about for years, but I didn’t have my story or characters.

During a spell working as a copywriter and creating materials for a charity which helped people with congenital deformities in the developing world, I came across the work of French performance artist Orlan and photographer and artist Cindy Sherman. Both artists use themselves as canvas and experiment with ways of seeing (amongst many other things). Diana and Cal began to emerge and the central problem came with them. Diana is beautiful but psychologically damaged; Cal is physically damaged with a beautiful soul. My story had arrived.

His strength, resilience and inner spirit.

His rage. I completely understand why he becomes so angry with Diana and the world but there are times when he allows it to consume him and he turns it inwards. As Eve, his nurse says, anger is destructive. Cal has so much energy – he is a powerful life force – and it is great when he learns to use it for positive effect. It seems this has morphed into reasons why I like him – so you can see how much I do!

Did your early readers/editorial team like Cal to start with or did you have to change him in any way?

Early readers and my editor have all liked, and more importantly empathised, with Cal. As a child he is full of wonder and mostly unaware of his differences. He is resilient and creative and spends a lot of time by himself without complaint. As adolescence and young adulthood approaches he is increasingly ill at ease with himself and the world, tormented, and lonely. Some might say this is true of most teenagers – and I’d agree! – but Cal has so much to contend with. He loves Diana; she is mother to him, and he wants to please her but he realises that to achieve personal happiness he cannot continue to do her bidding.

There are incredible real-life stories of children with terrible diseases which damage their faces and bodies – I’m thinking of the likes of David Lopez Jackson ,the Peruvian boy raised by a Scottish plastic surgeon and Rocky Dennis (there is a film Mask starring Cher, though I’ve not seen it) but Cal is a totally fictional character – even his condition is non-specific/made up. I didn’t want facts to limit the story. I’m after emotional truths and the ability to play and stretch ‘truth’ is one of the many things I love about fiction. Stephen King’s quote: ‘Fiction is the truth inside the lie’ speaks to me!

None. I don’t plan to write a sequel, though one of my life mottos is ‘never say never’.

Perhaps, though I’m closer to Diana’s age than Cal’s so it’s hard to see how our paths might cross. I love music and musicians – my husband is one. And thoughtful, kind people are good to be around. Cal is incredible and I adore him – even when he’s a stroppy git! 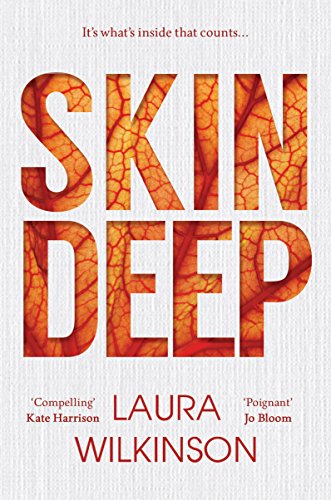 Former model Diana has always been admired for her beauty but what use are good looks when you want to shine for your talent? Insecure and in desperate need of inspiration, Diana needs a muse.

Congenitally deformed, Cal lives a life largely hidden from the world.  He needs love too and he was born to be looked at.

A chance encounter changes everything. Cal becomes Diana’s muse and friendship follows but as Cal grows up cracks appear. .

Both want to be accepted for what lies within but is it possible to find acceptance in a society in which first impressions and what’s on the outside count for so much?

After time as a journalist and copywriter now Laura writes stories. She has published six novels for adults (two under a pseudonym) and numerous short stories. Public Battles, Private Wars, was a Welsh Books Council Book of the month; Redemption Song was a Kindle top twenty. The Family Line is a family drama set in the near future, looking at identity and parenting. ‘It will haunt your dreams’ Books at Broadway. Her latest is Skin Deep. Alongside writing, she works as an editor & mentor for literary consultancies and runs workshops. She’s spoken at festivals and events nationwide, including London Metropolitan University, GladLit, University of Kingston, The Women’s Library and Museum in Docklands. www.laura-wilkinson.co.uk   Twitter @ScorpioScribble Facebook: Laura Wilkinson Author Instagram: laura_wilkinsonwriter Pinterest: laura1765 Goodreads: Laura_ Wilkinson