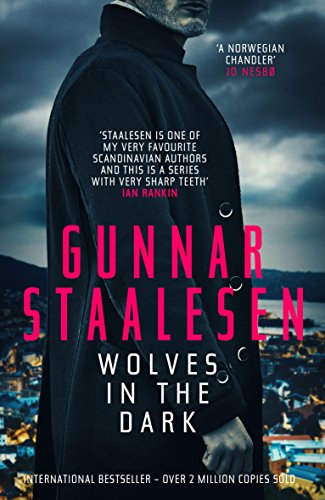 Reeling from the death of his great love, Karin, Varg Veum’s life has descended into a self-destructive spiral of alcohol, lust, grief and blackouts. When traces of child pornography are found on his computer, he’s accused of being part of a paedophile ring and thrown into a prison cell. There, he struggles to sift through his past to work out who is responsible for planting the material … and who is seeking the ultimate revenge. When a chance to escape presents itself, Varg finds himself on the run in his hometown of Bergen. With the clock ticking and the police on his tail, Varg takes on his hardest – and most personal – case yet. Chilling, shocking and exceptionally gripping, Wolves in the Dark reaffirms Gunnar Staalesen as one of the world’s foremost thriller writers.

When Varg Veum is woken up at 7.00 a.m., he wasn’t expecting the police to be there to arrest him for the most heinous of crimes – child pornography. They have evidence. Pictures of him in the act.

At the station, the police start to question him. But he can’t remember anything about the nights in question … why? Well, he’s a bit of an alcoholic – well a lot of one actually and has been experiencing black outs/memory loss because of this. But he would never be drunk enough to take part in this kind of thing. Would he? Alone in the bathroom, he sees an opportunity to escape and he takes it. Luckily, Varg is a private detective so has the skills needed to investigate, but how can he do that when the person is he is investigating himself and the list of people who would want to exact revenge on him is huge. Like crazy huge.

As the intricate web of potentials starts to weave together, the author takes us on a steadily paced, heart wrenching, jaw dropping trip as Varg tries to find out who hates him this much.

Wolves in the Dark is Nordic Noir at it’s absolute best! Although Staalesen has written twenty-one other books, and there is clearly some cross-over from previous books, I didn’t feel that I had missed out in terms of this book’s plot – it has however made me feel quite upset that this is the first of Staalesen’s books I have had the pleasure of reading. I want to go and get the rest and I will be first in line for the next instalment because that ending! OMFG!!!!!!

In a similar vein to my feelings after reading Cursed by Thomas Enger (you can read my review here) – I need to read more! Staalesen is a wonderful writer and the translation is excellent.

Wolves in the Dark is an atmospheric and compelling read, although the subject matter is difficult at times, it is certainly dealt with sensitively.

I would strongly recommend you get this one folks! It’s a flipping belter!!!

My thanks to the team at Orenda Books for my review copy and for my stop on the tour.

Go and get your copy now folks!

Gunnar Staalesen was born in Bergen, Norway in 1947. He made his debut at the age of 22 with Seasons of Innocence and in 1977 he published the first book in the Varg Veum series. He is the author of over 20 titles, which have been published in 24 countries and sold over four million copies. Twelve film adaptations of his Varg Veum crime novels have appeared since 2007, starring the popular Norwegian actor Trond Epsen Seim. Staalesen, who has won three Golden Pistols (including the Prize of Honour), lives in Bergen with his wife. When Prince Charles visited Bergen, Staalesen was appointed his official tour guide. There is a life-sized statue of Varg Veum in the centre of Bergen, and a host of Varg Veum memorabilia for sale. We Shall Inherit the Wind and Where Roses Never Die were both international bestsellers. Don Bartlett is the foremost translator of Norwegian, responsible for the multi-award winning, bestselling books by Jo Nesbo, Karl Ove Knausgaard and Per Pettersen. It is rare to have a translator who is as well-known and highly regarded as the author.