I am so excited for my lovely friend, Jennifer!

‘Isolation Junction’ is Jennifer’s debut novel which was released October last year within Domestic Violence Awareness month. Jennifer’s book became an Amazon bestseller in both paperback and kindle editions within weeks of its release last year. Jennifer’s book follows the story of Rose who is stuck in an abusive and coercive relationship referred to as Isolation Junction.  After years of emotional abuse, the self doubt about her future and the erosion of her confidence, Rose takes a stand.  Finding herself alone, penniless and frightened Rose wonders how she will ever escape from the situation to provide a better life for herself and her children.  With 100 reasons to leave and 1000 reasons why she perceives she can’t – will she have the courage to do it? And will she find the support to regain control and confidence?

Jennifer will also be appearing on Estuary TV Live news on Wednesday 21 June on the 5.30 p.m. show in East Yorkshire and North Lincolnshire. Available to watch on Freeview channel 7 or Virgin 159. It may be live on their Facebook page as well which can be seen here: https://www.facebook.com/EstuaryTV/

Here is why Jennifer is nominated for this award: ”Jennifer is an inspiration on so many levels. She runs several businesses with passion, dedication and positivity. But the reason I am nominating her for this award is because of her own experiences of domestic abuse and how she responded. Following years of domestic abuse, Jennifer made the brave decision to walk away and start again. Not only that, she decided to turn her experience into something positive and one that could actually help other victims (both female and male). Jennifer wrote her book Isolation Junction which was released last year. Using her own experiences but also those of other women she spoke to the, message in the book is that victims are not alone. There is an escape from Isolation Junction. Since the release of the book Jennifer has been contacted by other victims who have been moved, inspired, encouraged and supported by her book. Here are some of the reviews it has received. “This book was a great read from the perspective of a domestic abuse survivor. It was very well written and thought provoking.” “If this book helps just one person, it’s fulfilled its purpose.” “Well done Jennifer for writing a very true account of women suffering domestic abuse. It was like looking back at my life. I highly recommend reading this book” Jennifer is a brilliant role model for women who are feeling isolated, alone, undervalued and lacking in confidence. There is an escape and I’m delighted Jennifer’s book will help to highlight the very real trauma of domestic abuse.”

Jennifer says “I am delighted to have been nominated for this award and my hope is to raise awareness of this often hidden and unseen behaviour and empower women in abusive relationships to seek help for themselves and find the confidence to change their lives. In being nominated it says to me that I am working towards my goal and on the right path. I look forward to joining other nominees on the day”.

Winners will be announced on Sunday, October 8th, 2017, at the annual BizMums Conference & Awards at the Manor House in Alsager, Cheshire. The day will bring together 100’s of mums in business from across the region to network, learn and celebrate each other’s achievements of the past 12 months

I’m sure you will all join me in wishing Jennifer the best of look in the awards!

Jennifer’s debut, Isolation Junction, is available now and you can get your copy over at Amazon UK 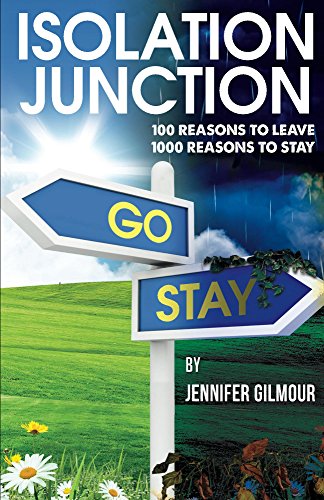 Rose is the mother of two young children, and finds herself living a robotic life with an abusive and controlling husband. While she struggles to maintain a calm front for the sake of her children, inside Rose is dying and trapped in ‘Isolation Junction’.

She runs an online business from home, because Darren won’t let her work outside the house. Through this, she meets other mums and finds courage to attend networking events, while Darren is at work, to promote her business.

It’s at one of these events that Rose meets Tim, a sympathetic, dark-haired stranger who unwittingly becomes an important part of her survival.

After years of emotional abuse, of doubting her future and losing all self-confidence, Rose takes a stand. Finding herself distraught, alone and helpless, Rose wonders how she’ll ever escape with her sanity and her children. With 100 reasons to leave and 1,000 reasons she can’t, will she be able to do it?

Will Tim help her? Will Rose find peace and the happiness she deserves? Can Rose break free from this spiralling life she so desperately wants to change?

The BizMums awards were established in 2013 by BizMums Founder Michelle Childs to recognise the achievements of mums in business across the UK. This years event is sponsored by 90 Days of Social. Nominations closed on Friday 26th May 2017