Today I have an extract for you from The Inheritance, the latest novel by Angie Coleman but first, here’s the blurb … 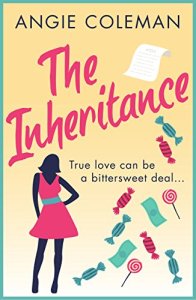 What happens when you are forced to live and work with your worst enemy? A feisty romance perfect for fans of Lindsey Kelk and Lucy Diamond.

Twenty-four-year-old Ashley Morgan thinks her future is guaranteed when she takes over the reins of her family business. What could go wrong?

But when her father decides to give the job to Jamie Standley, his right-hand man, Ashley feels cheated and breaks off all ties with her father.

Three years later at the reading of her late father’s Will, she discovers to her horror that Jamie will continue to be director of Morgan & Hall, while she will only receive a small share in the business. But on one condition: that Ashley and Jamie work together and live under the same roof for a whole year…

Once again Ashley feels betrayed and cheated. To her, Jamie is an impostor and she is determined to make him pay. But forced cohabitation can sometimes have unpredictable consequences…

Ready for the extract …?

“Isn’t he just beautiful?'” Elly asks me. It’s lunchtime, and she’s waving a photo of Martin Goodwin in front of my eyes.

“Yeah, he’s alright.” I mutter. His pose and his eyes suggest that he is a very charismatic person. His books are all very intriguing, and I have no doubt that he’s an interesting man. But I’m not as obsessed as Elly. The idea that he’ll be visiting our book shop soon doesn’t excite me that much.

“You look so damn apathetic today.” Elly comments, then she puts the photo back in her bag carefully and sighs noisily.

“That’s not true, I just don’t know him well enough to make a judgment.”

“You really don’t have to know him to make a judgment about him – he’s the most handsome man in the world!” She stresses the final few words, waving her hand to emphasise what she’s saying. Elly has always been like this: she’s very passionate, light-hearted and a little bit insistent. I wonder how she hasn’t clashed with Jasper yet. He’s always so uptight and demanding.

“That doesn’t sound like an honest comment, but it’ll do for now.” she replied, then she pulls a perplexed expression.

“What?” I ask after a while. She doesn’t seem to want to stop staring at me with her intense, blue eyes.

“Nothing, you look well rested today, but you’re still so grumpy. Maybe something has changed in the apartment?”

“Nothing has changed, unfortunately, Elly. Let’s just not talk about that, I want to forget about Jamie while I’m at work.” Thinking about Jamie makes me mad – I don’t even have to be with him to feel like this!

“Okay, okay. If you don’t want to vent about it, that’s fine. But I still think it will be good for you.” she insists with a slightly patronising tone.

“I just hate him, okay?” I burst out. I’m losing my cool. “He invited some of his friends to my apartment last night without even asking me. He doesn’t seem to realise that the apartment is mine and it will be even if we have to co-habit. He’s making me hate the apartment, he’ll end up stealing it away from me like he did my father’s company.”

“That’s not as bad as you make it sound – it will be alright so long as he doesn’t bring a hooker to the apartment.”

“Please tell me that you’re joking and you don’t really think that?”

Elly giggles, she’s obviously enjoying my burst of anger more than I am. What on earth did I do wrong to deserve all this? Did I expect too much from Dad? I only wanted to be appreciated by him and to enjoy my favourite apartment. Why did neither of these things happen? Why does something always have to go wrong in my life?

“Come on, don’t be too negative. If Jamie still looks like I remember him, you’re sharing your apartment with a good-looking man. Many women would pay to be as lucky as you.” she says, still giggling a little. I’m pretty sure that Elly saw Jamie only once and from a distance. I have no idea why she’s so confident in her opinion of Jamie. I have talked about him many times, but I never spoke highly of him.

“Do you reckon? Well, they can have him. Jamie is an arrogant, insensitive and irritating man. He’s the one who has convinced my father that he’s the perfect candidate for inheriting the company, and not me. He’s the one who has decided to introduce a hundred different new ranges which have taken over the traditional ones. He has so much power now that nobody can kick him out, even if they wanted to. The company would crumble without him. If any woman wants him, let her have him. For free.”

“Wow, you hate him with a passion, don’t you? If I didn’t know you so well, I’d say that maybe you’re a little attracted to him.”

“Well, thank goodness you do know me, then.” How on earth did she even conceive this idea? Jamie is the most hateful man I’ve ever known. He may be handsome, but what does that matter if his personality is awful?

“Okay, let’s change the subject,” Elly says. She’s smiling. I look at her, fearing another irritating question. “Considering that you don’t like staying in your apartment that much, do you fancy going out for a drink after work? It would be fun to have a girls’ night out and it would help you to relax a little. You’re overstressed” Her expression is bright.

I think about it for a second. I don’t like the idea of leaving the whole apartment for Jamie to enjoy tonight, but it would be great to switch off from the routine a little. I will also avoid seeing Jamie’s face for the day, which is always a bonus.

If it has, then pop over to Amazon UK NOW to get your copy 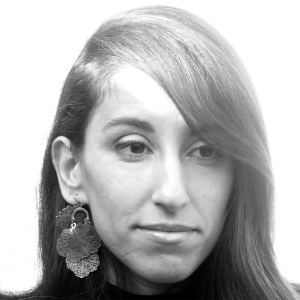 Angie Coleman was born in 1987 in Lanciano, Italy. She graduated from Organization and Social Relations at the University of Chieti. THE INHERITANCE was the winner of the 2016 Ilmioesordio prize.