It’s my turn on the blog tour for Last Witness, the latest thriller from the lovely Carys Jones.

Right, you’ve been warned! Do not complain to me if the blurb for Last Witness or my review spoils book one for you! 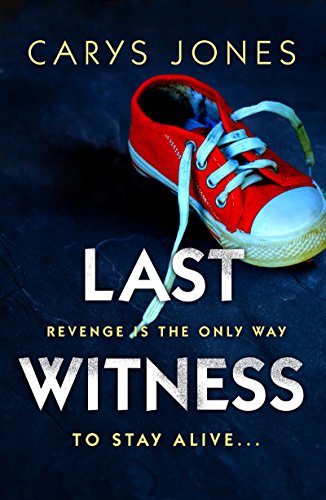 The page-turning sequel to the best-selling psychological thriller Wrong Number. With her husband gone, and his legacy in her hands, Amanda Thorne is hell-bent on revenge.

Amanda Thorne is on a mission to avenge her husband. Restoring his honour and protecting his legacy will be dangerous, but she will not rest until all those who have hurt her loved-ones have been dealt with.

Her only option is to go undercover in the murky world of the gang kingpin McAllister. So, with her loyal companion Shane by her side, she heads back to Scotland to finish what they started.

McAllister‘s world is one of seedy nightclubs, drug deals and beautiful women, but he is a hard man to get close to. As Amanda gets deeper and deeper into his dangerous world, what secrets from the past will come back to haunt her, and will she be able to protect the last witness to the truth?

A compelling, heart-stopping thriller which you won’t be able to put down…

What a great sequel to Wrong Number.

Following the death of her husband, Amanda Thorne, a nice, normal IT bod, is out for revenge. She knows who was responsible for her beloved’s death and she isn’t going to rest until she has avenged his death.

Last Witness is as fast paced and gritty as you would expect following Wrong Number. The storyline is slick and intelligent, if not a little far-fetched in places. This doesn’t detract from the story line at all though, which is strange as when I read something that I find implausible, I tend to tune out and give up on the book, for some reason though, I felt compelled to keep reading, and I’m so glad I did!

As Amanda gets closer to the truth behind her husbands death, she is dragged deep into the depths of Scotland’s criminal underworld … She could be about to see her husband a lot sooner than she ever thought she would!

Last Witness is a great read and one I will be recommending!

Many thanks to the author and Aria Fiction for inviting me to join the blog tour.

You can your copy of Last Witness over at Amazon UK

Make sure you follow the rest of the tour!

Carys Jones loves nothing more than to write and create stories which ignite the reader’s imagination. Based in Shropshire, England, Carys lives with her husband, two guinea pigs and her adored canine companion Rollo.