I am delighted for it to be my stop on the blog tour for Jane Isaac’s latest novel, The Lies Within. 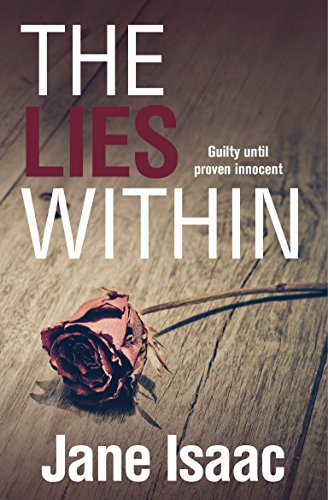 Be under no illusions by her kind face and eloquent manner… This woman is guilty of murder.

Grace Daniels is distraught after her daughter’s body is found in a Leicestershire country lane. With her family falling apart and the investigation going nowhere, Grace’s only solace is the re-emergence of Faye, an old friend who seems to understand her loss.

DI Will Jackman delves into the case, until a family tragedy and a figure from his past threaten to derail him.

When the police discover another victim, the spotlight falls on Grace. Can Jackman find the killer, before she is convicted of a crime she didn’t commit?

A gripping thriller perfect for fans of Gillian Flynn, S.J. Watson, B A Paris and Sophie Hannah

The prologue on this one is short, two and a half pages long … short? Either way, it’s bloody good, no, it’s bloody brilliant! Had me hooked from the start.

DI Will Jackman is back (thank god) but he’s working in a new station and is supposed to be working on improving police procedures, instead he is called to be the SIO on a murder case.

As the investigation slows down and Jackman is sent back to his old station, another body is discovered. Could this be the work of the same person? Is there a serial killer out there? What did they miss last time?

I loved how Jane sets this one up, we start in court (that short but oh so meaningful prologue) with the prosecution barrister telling us how Grace, the defendant, cannot be trusted, at all, ever. She is a cold blooded murderer and needs to spend the rest of her life behind bars. But what drove her to murder? What has happened to this woman?

Well, we then travel back ten months and find out how the heck this lovely woman has ended up on trial for murder.

Well, what a mind-blowing story this is!

It kinda reminded me of Law & Order, the TV series, where we see the police investigation and then the court case, its ace! I loved it! Very refreshing and perfectly executed.

From start to finish you just know something is going to happen, there’s something, you don’t quite know what, but something just hidden, something ever so slightly out of reach for you to be able to grab hold of it properly, and by gosh it doesn’t half make you turn those pages that little bit faster!

Dripping with suspense and intrigue, The Lies Within is a superb instalment in the DI Jackman series, which just gets better with each book, and it is one you do not want to miss! Seriously, if you’re looking for a new series to get stuck in to, this is it!

You can get your copy over at Amazon UK

My thanks to Legend Press and Jane Isaac for my copy, it’s been a pleasure reading! There’s also a superb launch party going on over on Facebook … Make sure you get involved there’s lots going on!

Make sure you follow the rest of the tour!

Jane Isaac lives with her husband, daughter and dog, Bollo, in rural Northamptonshire, UK. Her debut novel, An Unfamiliar Murder, introduces DCI Helen Lavery and was nominated as best mystery in the ‘eFestival of Words Best of the Independent eBook awards 2013.’

The Truth Will Out, the second in the DCI Helen Lavery series, was nominated as ‘Thriller of the Month – April 2014’ by E-thriller.com and winner of ‘Noveltunity book club selection – May 2014’.

In 2015 Jane embarked on a new series, featuring DI Will Jackman and set in Stratford upon Avon, with Before It’s Too Late. The second in the series, Beneath The Ashes, will be published by Legend Press on 1st November 2016 with the 3rd, The Lies Within, to follow on 2nd May 2017.

Both DI Jackman and DCI Lavery will return again in the near future. Sign up to Jane’s newsletter on her website at http://www.janeisaac.co.uk for details of new releases, events and giveaways