I am delighted to welcome author, Mason Cross to the Bookworm HQ today.

Mason’s fourth novel, Don’t Look for Me, was published last week and he’s joining me now to chat about one of his characters … So, while I stick the kettle on (one day one of these authors will make me a brew!) I’ll let Mason get started …

Name: Carter Blake (at the moment)

He isn’t married, has no kids that we know of, and is currently of no fixed abode.

The Time to Kill (aka Winterlong in the US)

Don’t Look For Me

When did you create Blake?

I had written one novel that failed to sell, so I put a lot of thought into writing something that would appeal to publishers. I consciously designed Carter Blake to be the kind of character who could develop satisfyingly across a series, and to be one who wasn’t too tied down or restricted in what he could do or where he could go. That means I can drop him into lots of adventures in different places, and each book can be a slightly different kind of thriller.

Once I came up with the character of Blake, I thought about what kind of villain would make a good antagonist and came up with Caleb Wardell, an ex-military serial killer. When I had those two characters, it was quite natural to come up with a story that pitted them against one another.

He’s extremely resourceful and adaptable. He tries to plan for all eventualities, but knows that at some point things will go to hell and he’ll have to think on his feet to survive.

He can be cold and detached. He doesn’t really need other people around him, and sometimes they take it personally.

Did your early readers/editorial team like him to start with or did you have to change Blake in any way?

For the most part, yes. Blake was slightly more cold-blooded to begin with, and on the advice of my editor I did soften him a little, and I think it’s really worked to the advantage of the character.

He has similarities to the people I know who are really together and organised. People who are good in a crisis. No one famous or anything!

What are your plans for Blake?

To keep writing books about him, assuming he survives. The great thing about Blake is I can tell almost any kind of story with him as a lead character. As long as he starts the story looking for someone, it can go anywhere from there.

Would you be friends in real life

I think so, although he’s a lot cooler than I am. On the other hand, our schedules would probably get in the way of catching up for a beer, since we’re both so busy: him with dodging bullets and unravelling high-level government conspiracies, me with writing books and putting the kids to bed.

Blake sounds like the kinda guy you wanna be on your side that’s for sure!!!

Want to find out more? You can grab your copy of Don’t Look for Me over at Amazon UK  and Amazon.Com 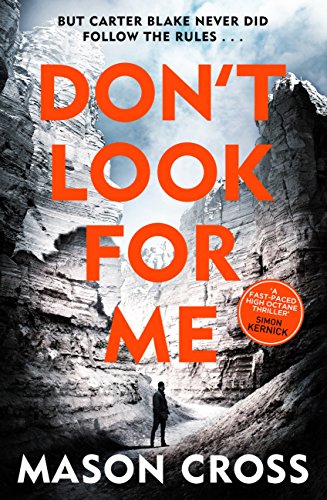 ‘Mason Cross is a thriller writer for the future who produces the kind of fast-paced, high octane thrillers that I love to read.’ Simon Kernick

Don’t look for me.

It was a simple instruction. And for six long years Carter Blake kept his word and didn’t search for the woman he once loved. But now someone else is looking for her.

He’ll come for you.

Trenton Gage is a hitman with a talent for finding people – dead or alive. His next job is to track down a woman who’s on the run, who is harbouring a secret many will kill for.

Both men are hunting the same person. The question is, who will find her first?

Thank you so much for joining me today Mason, it’s been great getting to know Blake!