I am beyond excited to welcome author Sarah Flint to the blog today! Having totally devoured her debut novel, Mummy’s Favourite, last year, you can read that review here, I was over the moon to be asked by the publishers, Aria Fiction, to share the cover with the world earlier this year, you see that post here. And now, here Sarah is to talk to me about all sorts of things bookish during the blog tour for the second novel in the #DCCharlieStafford series!

Thank you so much for taking the time to join me on my blog today – can I get you a drink? A snack?

Ooh, just a cup of tea please – trying to avoid the snacks at the moment.

Congratulations on book two! The Trophy Taker is a fantastic sequel to your unbelievably brilliant debut, Mummy’s Favourite (which I still can’t believe was your first outing!)

Where/when did you realise that you had a talent for writing?

In 2007 I realised my sister had a talent for writing when she had two books published. Her books were beautiful and I decided to give it a go myself. I was working part-time while my girls were young but I wrote every spare minute of the day or night. I had never written anything (except statements) since leaving school at eighteen but I penned my first novel in just over three months. Needless to say, it is still on the shelf but it began a passion that hasn’t gone away.

I think I can tell a good story but not with the greatest of style. My deviousness clearly outweighs my technical ability and my punctuation and spelling leaves a lot to be desired… so I am regularly told. I love writing now, however, and even though it has taken almost ten years of trying, I would urge the many people who say to me that they would love to write a book, to give it a try. Whether their efforts end up sitting on the shelf like my first tries, or not, they might discover a passion, or even a talent, which they didn’t realise was in them. It worked for me and I am so glad now that I gave it a go.

I imagine that your career in the police force has influenced your choice of genre, how do you handle the things you have to see and deal with during your day-to-day work?

I think by talking and communication. I have been very lucky to be part of a large, supportive family and to have great friends, both within the job and on the outside. My partner and three older daughters too, are great communicators and we can talk about anything and everything.

I retired a few months ago after thirty-five years. I have never forgotten some of the horrors I witnessed and I never will; the images will always remain. Behind each anguished face or bloodied body, however, are the broken lives of the victims and their families and they are the ones who really have to handle the situation. I, like many in the emergency services, NHS, social services dealt with the immediate. We play a role in the tragedy but it isn’t our tragedy. Maybe we return to the canteen and go through it with colleagues, we tell our loved ones, talk about it, replay it in our heads, maybe write it down but the next day could bring another, so we just have to move on.

The events of the last month in Westminster have been particularly poignant to me, after walking out from the tube station straight into the immediate aftermath. Another set of images that will remain with me forever. Suffice to say social media is good but there’s nothing like picking up the phone and actually speaking, or catching up with loved ones personally.

Sorry… serious part over. It’s good to talk though.

I struggled for years to find a character I loved. In the end Charlie, Hunter and the team are very much based on younger, braver, slightly more complicated and reckless versions of myself and a mixture of those I’ve worked with.

Before Mummy’s Favourite, I wrote a book, which again has not been published, where I introduced Charlie and her two sisters. It didn’t revolve around Charlie as much and was far more personal as I myself have three daughters. Charlie has evolved in my mind a lot more since then, so Mummy’s Favourite and now, The Trophy Taker have been written to accommodate her. I am relishing the chance to develop her further.

While I get the kettle back on I’m going to fire some quickies at you:

Ok, so, you are on book two now, what’s next? Are you still working in the force full time? Do you want to write full time?

I retired in September 2016 after thirty-five years and have been writing full time, in between trying to lose weight, get fit and in training to climb Mount Kilimanjaro early next year.

I have nearly finished the first draft of Book Three – I’m on the finale now which is as exciting to write as hopefully it will be to read. Then Book four – then who knows? Hopefully my fantastic publishers will want more.

If they do, I’ll continue to write in between travelling and return every now and then with the next offering. If they don’t, I’ll disappear into the wilds of New Zealand and become a hermit.

How do you decide your character’s names?

Charlie and Hunter just came to me while out walking one day. The others are a mixture of people I know and Google surname and first name searches. Sometimes I’ll ask a friend for a name. Sometimes I’ll read a newspaper or hear one spoken that I like. Pretty random really; but in my head they have to fit the person.

Sorry – nothing highbrow.  Matilda – a delightful Roald Dahl character, my girls absolutely adored and who read a lot. She made me laugh and cry as a child and regularly stood up for the weak against bullies.

Or Harry Potter – for obvious reasons!

I know you need to leave shortly so last question, do you want the last slice of cake? 😉

Oooh, it’s a real temptation but no, thank you very much though – I have to go and bake my own (without eating any of it – either baked or unbaked!) – it’s launch day and party-time this weekend!

Well thank you so much for joining me! It’s been an absolute pleasure getting to know more about you and your writing journey!

The Trophy Taker is out now folks! Here’s the blurb … 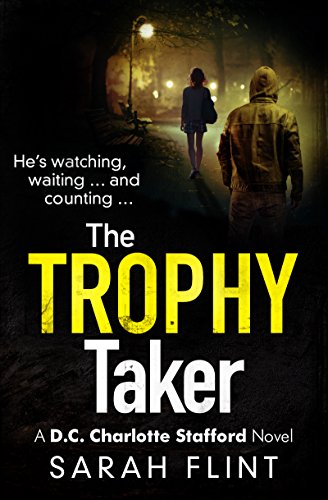 He’s watching, waiting… and counting. The next gripping serial killer read in the DC ‘Charlie’ Stafford series, from the bestselling author of Mummy’s Favourite. Perfect for fans of Angela Marsons.

He keeps each one floating in formaldehyde to stop them from rotting. Each finger denotes a victim, tortured and butchered, their heart ripped out and discarded, replaced instead by symbols of their treachery. He sits alone admiring his trophies weekly; each and everyone of them guilty in his eyes. And now more must pay.

But who or what links the victims?

DC ‘Charlie’ Stafford is already investigating a series of escalating racist attacks and it now seems she has a vicious serial killer on her patch. With no leads and time running out, the team at Lambeth are at near breaking point.

Something has to give… and all the while he’s watching, waiting… and counting.

Want a copy? Pop over to Amazon UK now and get yours ordered!!!