I am over the moon to be part of the blog tour for CP Wilson’s latest novel Ice Cold Alice.

Before I start wittering about how amazingly brilliant this book is (it’s currently in contention to be my book of the year!!) 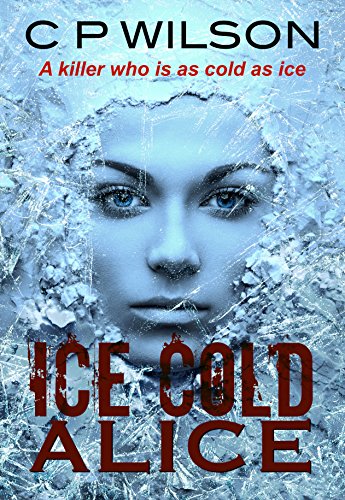 A killer hunts abusive spouses, blogging about their sins post-kill. Soon the murders and the brazen journaling draws the attention of Police Scotland’s CID.

This killer works with surgical preparation, precision and skill, using a unique weapon of her own and never leaves a trace of evidence behind.

Edinburgh’s DI Kathy McGuire, nearing the end of her career, begins the hunt for the murderer as a media frenzy erupts. But McGuire might have met her match…

What has led this killer to take the law into her own hands?

Is the woman accountable really a cold-hearted killer or a desperate vigilante?

Ice Cold Alice is my book of the year so far, it’s going to take something spectacular to beat this one!

Yes, you read the blurb correctly, the killer in this one is a woman! A female serial killer …

I wasn’t sure what I’d think of her to be honest, I mean, I utterly despise Anna (the female abuser) in Michael J Malone’s A Suitable Lie. She was the absolute pits, a real bitch if ever there was one, but Alice … Alice is different somehow.

Maybe it’s because of who she kills?

Abusive partners. Those who prey on and exploit the vulnerabilities of those they are supposed to love and take care of.

Maybe it’s that, as a woman, I personally can’t fully relate to a murderous man as the majority have some form of sexual motive behind their kills?

There are a few more reasons I could talk about but discussing some will reveal spoilers though so I won’t go there!

Wilson is a brilliant writer, he has a way that just pulls you into the book and the characters, making you need to know more about them, making you want them to get their result. Ice Cold Alice is a strange one as part of me was rooting for the police and the other part was rooting for the killer … This makes for an interesting reading experience!

As the story unfolds, we are taken back into the past, we discover how McGuire became such an accomplished detective, how she was shaped into the woman she is today, Wilson does this perfectly and the chapters switch between time frames and characters smoothly and intelligently, without confusing the reader – a fantastic skill!

I found this book to absorbing, totally absorbing. The plot line is weaved together perfectly, the characters are completely engaging and the twists and turns are so clever that I defy anyone to claim they knew what was coming!

I would strongly recommend this one to any true crime thriller fan! It is an absolute must read!!!

Thank you to the author and Bloodhound Books for my advanced reader copy, it’s a blooming belter!!

I cannot wait to see what else Wilson has in store for us!!!

You can go and get your copy now at Amazon UK

Mark Wilson is the Amazon-bestselling author of ten works of fiction and one non-fiction memoir. He also writes Crime Thrillers under the pseudonym, C.P. Wilson

Mark’s short story ‘Glass Ceiling’ won first prize in May, 2015 on Spinetingler’s Short story competition and will be included in Ryan Bracha’s Twelve Nights at Table Six. dEaDINBURGH reached the quarter finals of the Amazon Breakthrough Novel Award in 2014 and is a finalist in the Wishing Shelf Book Awards, 2015.

His novels have been well received and feature Scottish characters and locations.

Mark has several other stories in progress:

Mark currently teaches Biology in a Fife secondary school and is founder of Paddy’s Daddy Publishing, a company he set up to assist Scottish authors. He writes in his spare time, in lieu of sleep.