Today I am joined by the very lovely author, Emily Anne Brandon.

Emily’s debut novel, All That Glitters, stars Eve Hiscock and Emily is here to tell us all about her, so, while I get the kettle on, it’s over to you Emily … Who is Eve Hiscock?

Eve Hiscock is the main character in my debut novel, All That Glitters. She’s twenty-four and has been in a relationship with Iain for ten long years. She works in a small book shop which she finds unfulfilling. Eve feels fed up of her monotonous life with her reliable boyfriend and her boring job.

When did you create Eve?

Once upon a time, in a land far, far away (Scotland), I decided I wanted to write novels. Once I eventually got around to putting pen to paper, I was determined to create a main character who was fun and relatable – the kind of girl people already know in real life and the kind of girl people want to be friends with. I got to know Eve’s personality and traits while I planned and plotted the story, and I grew increasingly fond of her as she dealt with the ridiculous and amusing situations she found herself in.

Initially, I came up with a rough idea for All That Glitters, but Eve’s personality hit me before the plot of the story did. Through the entire process of writing the novel, my affection for Eve never faltered. She’s a lovely, bubbly girl who sometimes makes mistakes, just like the rest of us.

She sounds ace! What’s your favourite thing about her?

My favourite things about Eve are her heart of gold and her sense of fun. She loves with all her heart and she’s always keen to have a good time. She and Adam, one of the other main characters, carry out ‘alphabet games’ where they participate in a fun activity for each letter of the alphabet. It was Adam’s suggestion, but it’s the perfect idea for the fun-loving heroine.

She’s starting to sound a little too perfect, what do you like the least about her? Does she have any flaws?

Oh yes! The thing I like least about Eve is her occasional thoughtlessness. She can be headstrong and she sometimes speaks before she thinks.

Is she based on anyone you know in real life?

Although I didn’t base Eve on anyone in particular, I have to admit that there are one or two similarities to myself. I use a pen name and only two people in my life know I write novels. One of them gave me a laugh when she read All That Glitters and told me there is so much of me in there. I hope it’s a compliment!

Gosh! Only two people? That must be exciting and scary all at once! I’d love to know more about that however that can wait for another day!

What are your plans for Eve?

I don’t have any current plans to write another novel featuring Eve (I have so many other ideas and characters to get down on paper) but that’s not to say she won’t be resurrected at a later date.

I think I already know the answer to this one but, would you be friends in real life?

If I knew Eve in real life, we would have a hoot together and we would be great friends. I can envisage us going to see bands, films, musicals and, most importantly, out for cocktails, and I know we would have an absolute blast. I hope everyone else likes her as much as I do.

She certainly sounds like the kind of girl I’d like to get to know and, although All That Glitters doesn’t have any dead bodies in, I’m popping it straight on my TBR really for my pallet cleanse!!!

Thank you so much for joining me today Emily, it’s been great getting to know Eve and I wish you all the luck in the world with your debut novel!

If you like the sound of Eve and want to find out more about the alphabet game she plays with Adam, get over to Amazon UK to buy your copy now! 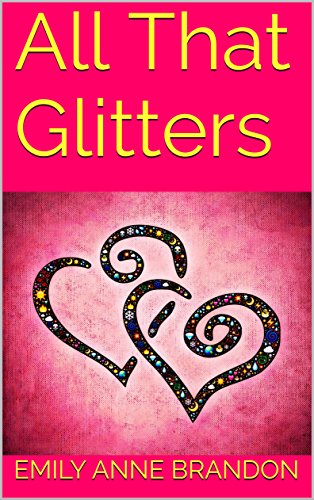 Eve and Iain were made for each other. Or were they? Eve fell for Iain at fourteen, but ten years later she’s bored. She wants a break to experience life and date other men before settling down. Eve runs off after a tearful break-up and falls, bumping her head in the process and blacking out. She wakes to a handsome stranger, Adam, taking care of her. She quickly falls hard for Adam and they begin a passionate relationship. Life moves on and everything is going brilliantly with Adam, as well as all the other aspects of Eve’s life. Or are they? As things begin to unravel all around her, Eve eventually comes to realise that perhaps all that glitters isn’t gold. Is it too late to get back the things she carelessly threw away?

Thanks for joining us today, hope you have a good one whatever you are doing, keep reading!